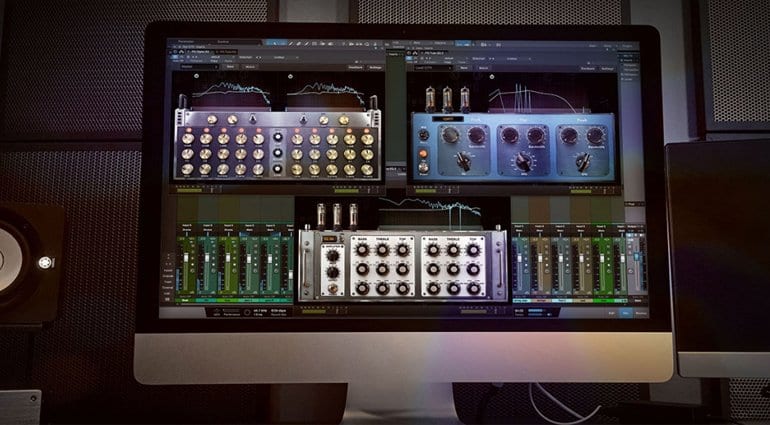 This is a tough one because I can see some ‘positives’ with this latest release from Positive Grid, but something is amiss. I have struggled to put my finger on exactly what my concern is, as I believe it’s a combination of issues I have with their marketing and delivery. I hardly ever have a bad word to say about ‘pro’ audio manufacturers and encourage the many varied options we have available, particularly when it comes to plugins. However, this doesn’t appear to be very ‘pro’ to me.

Let’s start with the positive points. Although I’m not entirely convinced by ‘first time ever‘ as they describe it, I’m not aware of a plugin that offers emulation right down to the component level. Like their Pro Series compressors, these EQ plugins offer a selection of different components within your modelled EQ to alter its characteristics. It’s a little too geeky even for me, but I like this concept as each piece of vintage equipment sounds different, and yet the plugins we use today only differ from manufacturer to manufacturer. Positive Grid are certainly trying to offer something different with this component level emulation instead of offering yet another modelled plugin, which I believe should be applauded.

However, this is where my interest ends. They described these new plugins on the Gearslutz forum with words like ‘revolutionary EQ match‘. These are bold words in my book, and in my opinion, misplaced. We already have EQ matching plugins from Waves & iZotope, and there may be more but I can’t think of them right now. What’s more, these alternative options are already very good. I suppose this is a continuation of their compression matching with their Pro Series Compressors, but revolutionary it isn’t. Maybe they believe it’s revolutionary because the EQ matching process utilises these analogue-modelled equalisers to achieve the result, whilst adding “real world analog sound characteristics“. In my world, if I ever needed an EQ match, I wouldn’t want the plugin to add any of it’s own artefacts, I’ll take care of that separately, thank you.

Whilst also considering their Gearslutz post found here, they explain with their EQ matching you can: “import the color of any source recording to their own projects, with cutting-edge analog gear emulation“. This seems both hypocritical and incorrect if they’ve also explained these plugins are adding their own ‘colour’. For this statement to be true, they would have to emulate every component available, and be able to analyse any piece of audio so accurately, that they can detect which components were involved in the source audio. To finish my complaints about the authenticity of their written material, how about this quote from the same post; “its wide range control will give users the necessary sound balance for professional work“. This is not only bad use of the English language, but clearly isn’t written by an industry professional.

Then there’s the face of this product, the graphical user interface. It’s so sublime it looks like there was more R&D spent on the pretty pictures than the audio. Positive Grid are making a fuss about these 3D GUI’s, and although I can’t point blame here, it certainly adds to my concerns. Likewise, looking at Positive Grid’s other ‘pro’ products we can’t avoid their Final Touch mastering App for the iPad. Is mastering on an iPad professional? I would have thought having a desktop version as well as the app would be half the story.

The biggest turn-off for me however came in the form of their promo video. The audio quality and mixing abilities demonstrated on the demo track worry me. Plugin manufacturers normally have stunning audio soundbites that grab you, but this just isn’t balanced and I’m sure there’s an error at 44seconds. I find this is inexcusable. Here it is, taken from YouTube on the Positive Grid channel:

Following on from this video, check out this other clip of theirs promoting the Pro Series Plugin range. I’m convinced their before/after demonstrations towards the end have been tampered with to appear even more ‘wow’, rather than being professionally balanced. I suspect they added a high-pass filter to dull the ‘before’ examples, as no compressor on drums would raise the level of cymbals like that. I’m not fooled. Check it out here, again from YouTube on the Positive Grid channel:

I’m so put off, in fact, I’m not even interested to try the demo any more. Let me know if you pluck-up the courage and discover anything worth mentioning. More information can be found here, on the Positive Grid website.