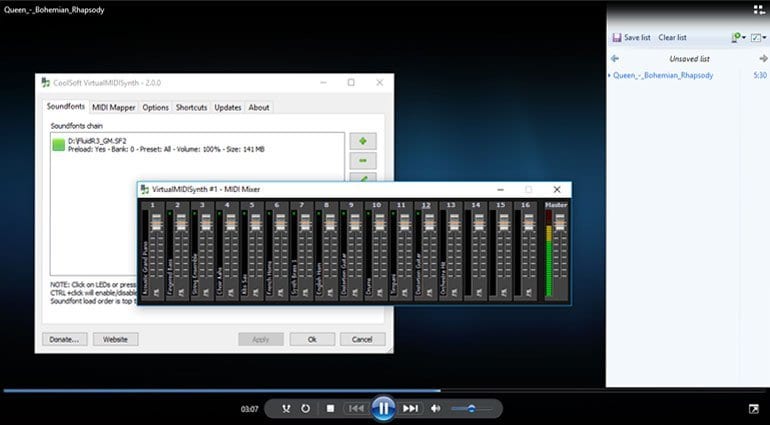 Playing back a MIDI file in Windows usually employs the built-in Microsoft GS Wavetable Synth and always sounds completely crap. CoolSoft’s VirtualMIDISynth aims to change all that with the cunning use of SoundFonts.

This veritable synthesizer engine has been part of the core Windows operating System since Windows 98. It was licensed from Roland in 1996 and based upon a sound set they created in 1991. The only change or update it’s received since then is moving from 32 note polyphony to 64 note polyphony with the arrival of Windows XP in 2001. It’s still there, in Windows 10 today. You can, right now, head over to MIDIWorld.com, download Bohemium Rhapsody (click here) and listen to the synth play it’s little heart out (if asked how to handle the file select “Windows Media Player”). I bet you’re glad you did that.

Into the MIDI file sound quality void leaps VirtualMIDISynth version 2. They’ve been at this a little while but the new version really nails it. VirtualMIDISynth offers the opportunity to replace the Microsoft one with something just as easy but infinitely superior. This is because it uses SoundFonts. SoundFonts are sample based sound libraries that are capable of being much larger, layered and detailed. They’ve also been around for decades, forming part of the Creative Labs Sound Blaster and Emu soundcards, but they’ve continued to grow and develop. There’s now a huge library of sounds out there, not just General MIDI, but specialised and dedicated banks for all sorts of music.

VirtualMIDISynth now installs as a multimedia driver, so it’s right there within Windows. You don’t have to load up a separate application or do any virtual MIDI routing. It appears as a device and all you have to do is select it as the default MIDI player*. It can run up to 4 virtual devices, each with its own SoundFont configuration. The polyphony is virtually unlimited. There’s a MIDI mixer to get into track volumes and the muting of parts. It has an integrated MIDI converter to render your MIDI files into MP3. It could revolutionise the playback of MIDI files on your Windows PC.

*This is actually more of a pain in the arse than you’d think. Microsoft stripped out the MIDI Mapper in Windows 8 and 10, which means there’s no way to tell Windows which MIDI device to use by default. Having just installed VirtualMIDISynth on Windows 10 myself I’ve found that it’s automatically being used by Media Player, as in the image above. But if not then you either have to download CoolSoft’s MIDIMapper to put that functionality back in or use a registry hack:
“HKEY_LOCAL_MACHINE\SOFTWARE\Microsoft\Windows NT\CurrentVersion\Drivers32” and edit the “MIDIMapper” entry to direct itself to VirtualMIDISynth. Neat eh?

Surely no one messes around with MIDI files these days? Well, they can and they should. MIDI files are tiny and you can fit thousands in a few megabytes. MIDI files contain individual tracks, letting you mix, mute and replace sounds at will. You can alter the pitch and tempo without all this messing about with time-stretching and pitch correction software – because it’s just MIDI. This sort of functionality is huge with fans of Karaoke. Also, many older games used MIDI for playback.

Ok, so it’s not going to change your life, but VirtualMIDISynth is free and makes your life better if you ever happen to run into a MIDI file.

You can download VirtualMIDISynth 2.0 from the Coolsoft website where you’ll also find links to some excellent and free SoundFont libraries.

Thanks for the guide. After getting VirtualMIDISynth installed and routed in Steem SSE I couldn’t be happier. Of course now I’ve spent the last few days looking for the right Soundfont. 🙂

Could you post your source about the polyphony of Microsoft GS Wavetable Synth? I’m trying to find an “official” source for those numbers for an article/video I’m doing about it. Thank you very much!

I can’t remember – google is your friend

Yes, I’ve been trying to Google that info for weeks. Hence how I stumbled across your article.

Nope, can’t honestly remember, but i read it somewhere 😀

It does suck. Badly.
Use Edirol Virtual Sound Canvas instead.