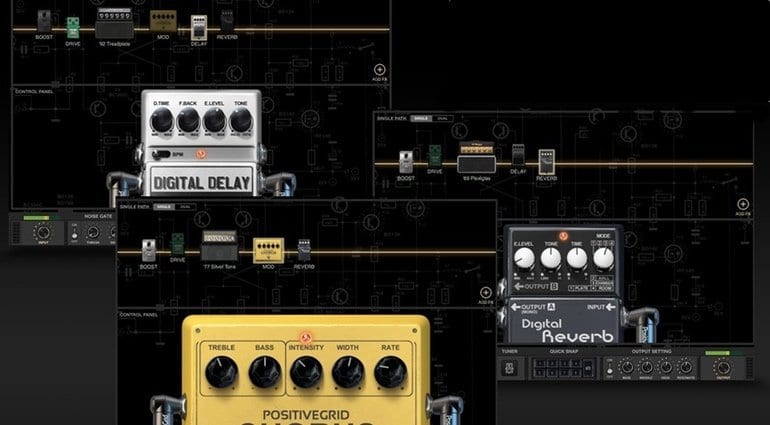 A (very) slim version of Bias FX Pro that costs you not a cent  ·  Source: Focusrite/Positive Grid

The LE bundle has three amps: the ‘77 Silvertone (Clean), ‘69 Plexiglas (Crunch), and ‘92 Treadplate (High Gain) amplifiers. The first one is “insanely great sounding”, Focusrite/Positive Grid say. The following pedals are included: Treble Boost, 6-band EQ, an 808 OD overdrive, a chorus, a digital delay and a reverb. The reverb is a BOSS RV-3 knock off, while the 808 OD seems to be in the Tubescreamer vein.

If you have zero guitar FX on your system, and need a (very) cheap way of getting a few amps and effect models, this might be interesting for you. Otherwise, you’ll have very similar tools already. Owners of a Focusrite interface can grab this straight away. If you don’t, you have one to sign up for an account and give Focusrite and Positive Grid all your data.

The aim here, of course, from Positive Grid’s point of view, is to get you interested in not only the Bias FX package, but also their growing universe of hardware and software. Bias FX, for example, currently comes in two packages with different price tags and feature lists, the Bias FX ($99) and Bias FX Professional ($199).

Find out more on the Plugin Collective page.

Leak: Ableton Push 3 – could it be a standalone groovebox?

Only today
Overloud Voice: An all-in-one vocal mixing chain for your DAW

20 Sep · Fender Strats have a Sound & a Feel that can become one with the Right Player. I find the Stratocaster to be very versatile & feel that every Guitarist needs to own one. I have three & ...

20 Sep · I’ve always been fascinated by the design of the Stratocaster. It just seemed “perfect”. And this was long before I even knew how to play guitar. Once I learned I KNEW I needed to own one. I ...

20 Sep · The fact you dare even mention the bottom-feeding piece of shiz "Squier" in the same vicinity of the hallowed Strat tells me you have no couth no honor.