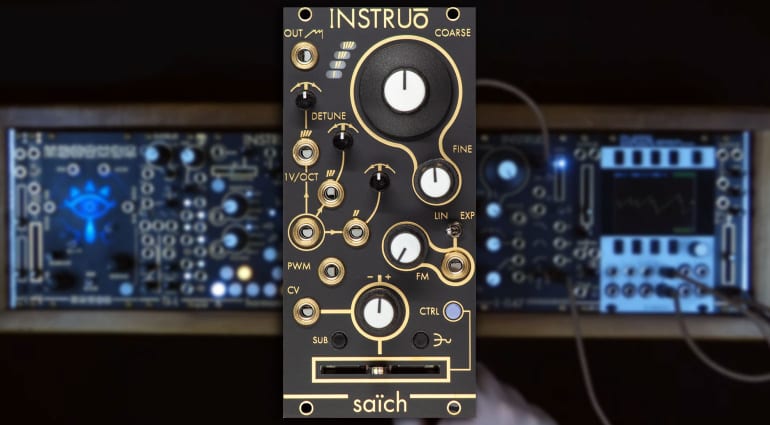 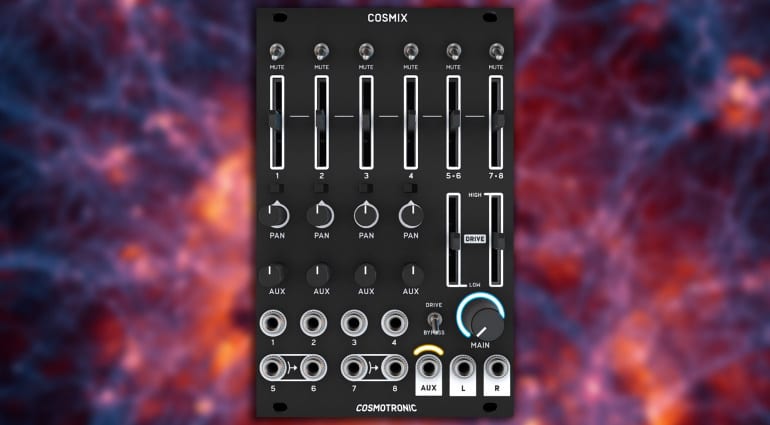 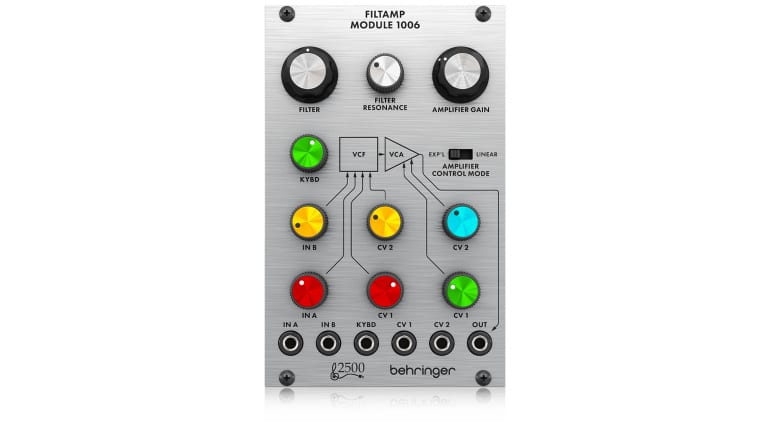 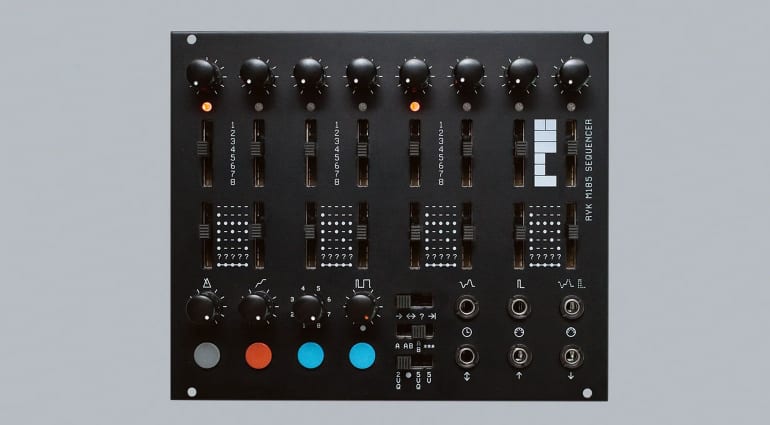 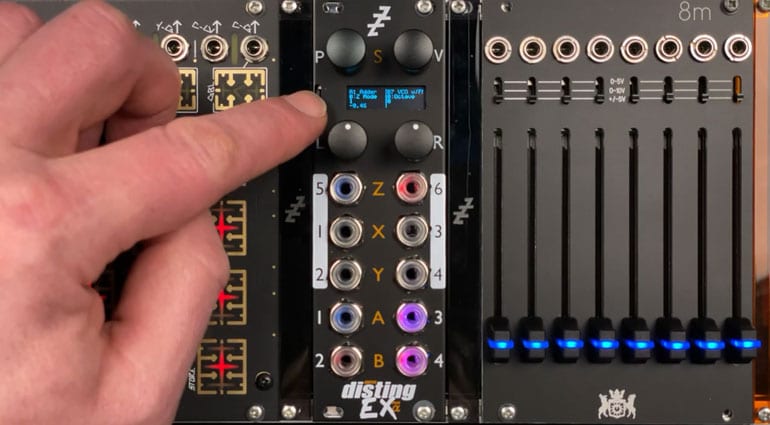 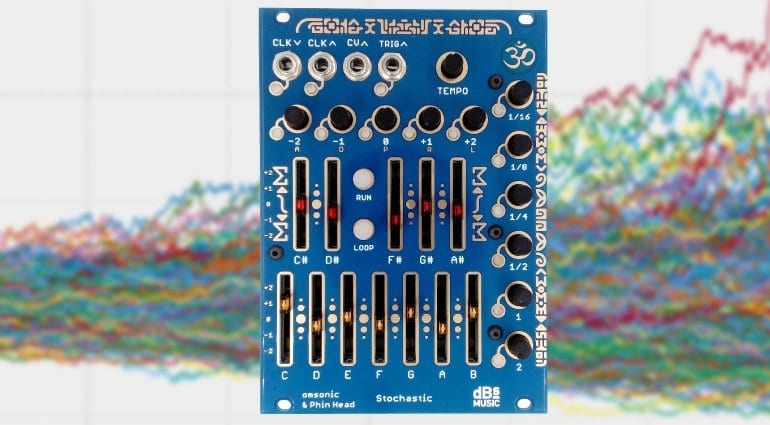 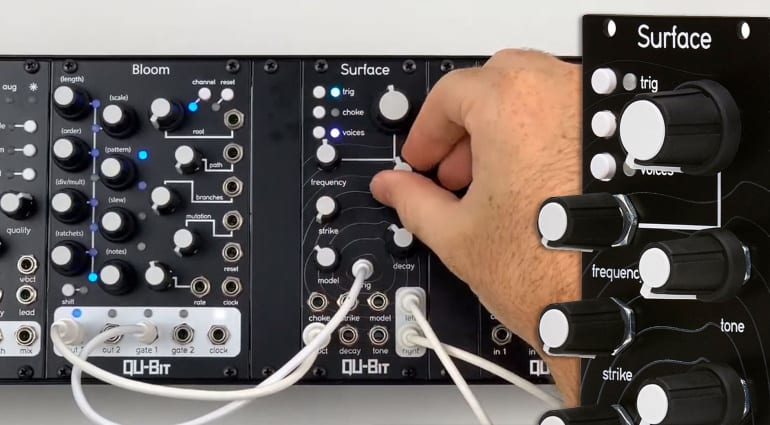 You can drown in Eurorack modules these days but here are the ones that have risen above the waves for us this year. Sometimes it’s the sound, the functionality or feature and sometimes it’s the smallest detail. Eurorack is so many things; it’s real, tangible, it’s clever, it’s visceral, it’s about art and engineering, it can revolutionise your creative process and take you in new directions with a single module. It continues to thrill and fascinate.

A breathtakingly beautiful module. It’s not unique, there have been plenty of modules that model or generate plucked or struck sounds. But for me Surface brought that vibe together in an elegant and instantly usable way. It has a number of different models going beyond the string into electric and prepared piano, percussion and noises. You then have control over Tone, Decay and Strike which can dramatically change the nuance of the sound that fills up to 8 voices in overlapping modular heaven. If you want more there’s a Dark Mode hidden inside that lets all the parameters find their way to less musical and more versatile destinations. It’s a lovely thing. 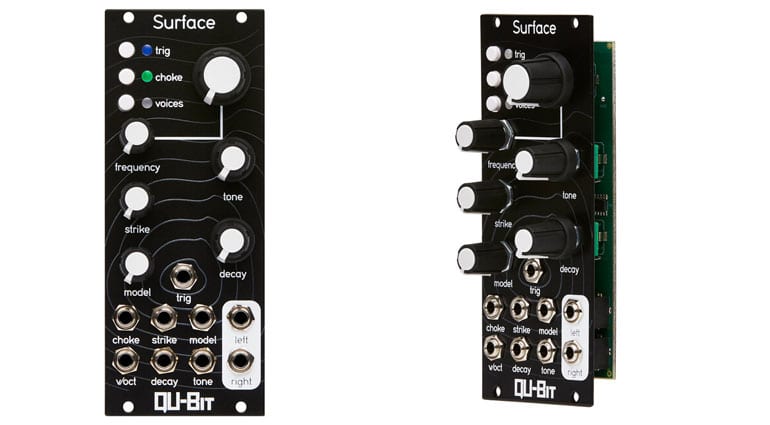 Not entirely exactly when this first made it out into the wild but I was on the waiting list a long time before mine arrived over the summer. The Stochastic Inspiration Generator is a work of art in modular form. It’s a sequencer but one where rather than programming notes or steps you suggest a melody and a course of action and Stochastic interprets that into some of the sweetest collections of notes I’ve ever encountered. Each event it generates has its pitch, octave, duration, onset, offset, portamento and ratchet set by probability controls and you can decide how much control and input you want to exert on that. It’s both dreamy and baffling, intuitive and astonishing. 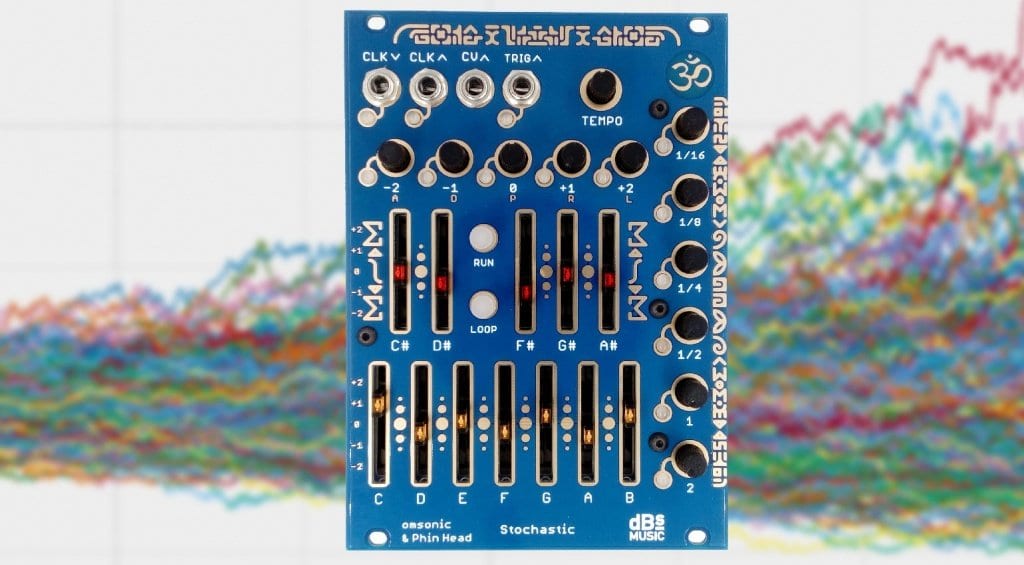 Everyone has a Disting 3 or 4. Everyone loves the functionality, the multiple algorithms that solve so many problems you didn’t even know you had. It’s one of the most useful modules in Eurorack. However, nobody loves the interface, nobody. When the Super Duper Disting EX Plus came along we realised with joy that we could have twice the functionality and an interface that didn’t make you want to pull your own teeth out with a patch cable.

Disting EX is totally brilliant. They’ve squeezed in an 8-voice polyphonic sampler, a stereo tape delay and a super-long audio recorder for capturing your performances. The sample rate has been increased to 96kHz, it has more RAM for longer and more complex reverbs and delay and the triggering latency has been shaved down. And just look at that beautiful OLED screen telling you exactly what’s going on – glorious!

The M185 is a classic sequencer designed originally for the Roland System 100 and then became the popular Metropolis Sequencer from Intellijel. The original designer felt it was time to resurrect and improve upon his original intentions and the result is a brilliantly playable sequencer that feeds off an intuitively creative gate pattern system. Each of the 8-steps can have up to 8 beats which can be gated in a number of interesting ways. The rhythms and possibilities it generates can be surprising and a lot of fun. You can restrict the flow to keep to the same number of steps per cycle or let it build and retract steps as you play. You can even split it into two separate sequencers and share the steps between them. It’s a lot of fun. 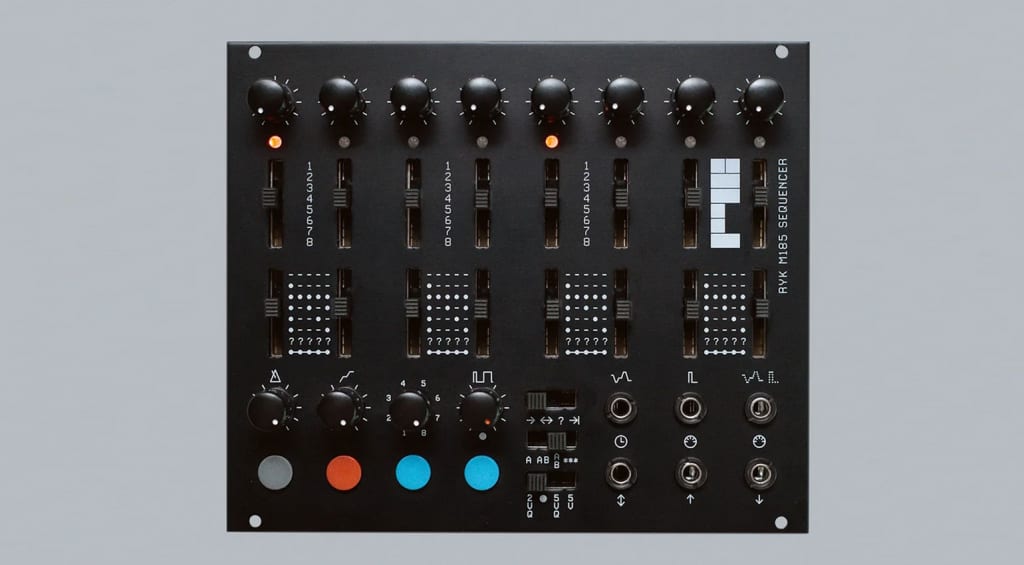 Behringer’s approach to Eurorack has been to model vintage modular systems like the Roland System 100 and Moog Modular and then release the modules slowly over time. When they took on the ARP 2500 I had hoped that the smaller range of modules may result in a more coherent release schedule, but no, we’ve only had a few so far. The stand out release though has been the 1006 FILTAMP a combination of a classic ARP filter and VCA in a versatile and fat sounding module.

FILTAMP can mix in two audio sources and then has 3 CV inputs to control the filter cutoff allowing you to set up complex and creative modulations. Two of the CV inputs can also be routed to the internal VCA which can double up on envelopes or run them completely independently. The filter likes to self-oscillate and sounds as good as any filter in my rack while having a distinct character. The build quality suits the budget pricing but the sound and functionality are top-notch. 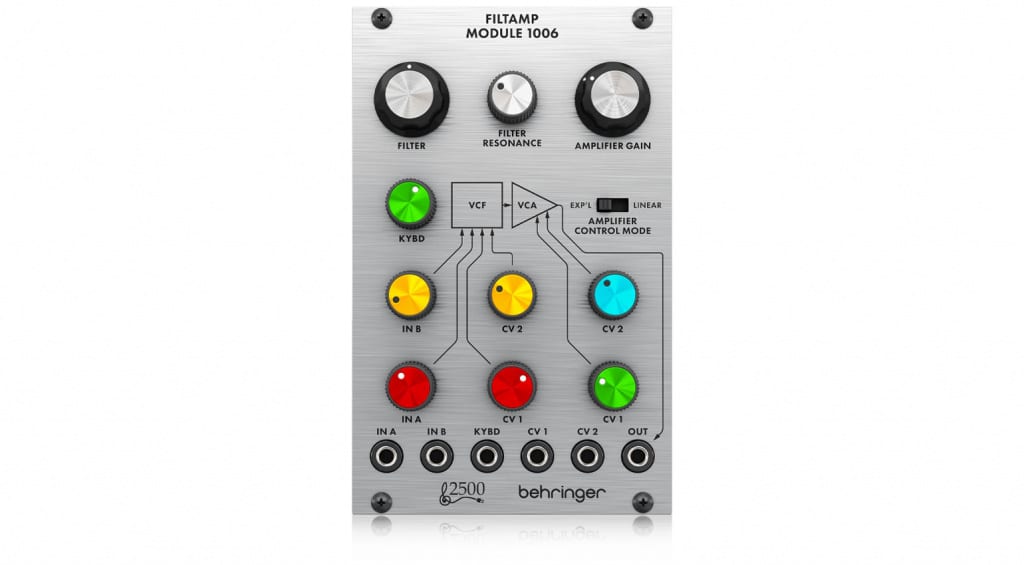 A stunning little multi-functional module that looks fabulous regardless of what it’s doing. You’ve got to love those three rings spinning and bouncing about. They brilliantly illustrate the most obvious mode of the 3PT which is as a 3-channel LFO. But that’s just the beginning. In Chord mode you can output triads controlled via the CV input. In Quantize Mode it will apply one of 24 scales to whatever is coming in. It can send Randomisation out across all three channels either stepped or free form. To complete the set it can also be an 8-step sequencer. All the while looking fabulously animated.

The 3PT is not breaking any boundaries or pushing any envelopes but it’s perfectly formed, visually helpful and has features that any small system would final invaluable. The kit version is under £100 and very straight forward to build and even the manual and packaging is a cut above most other modules. Robaux nailed it with this one. 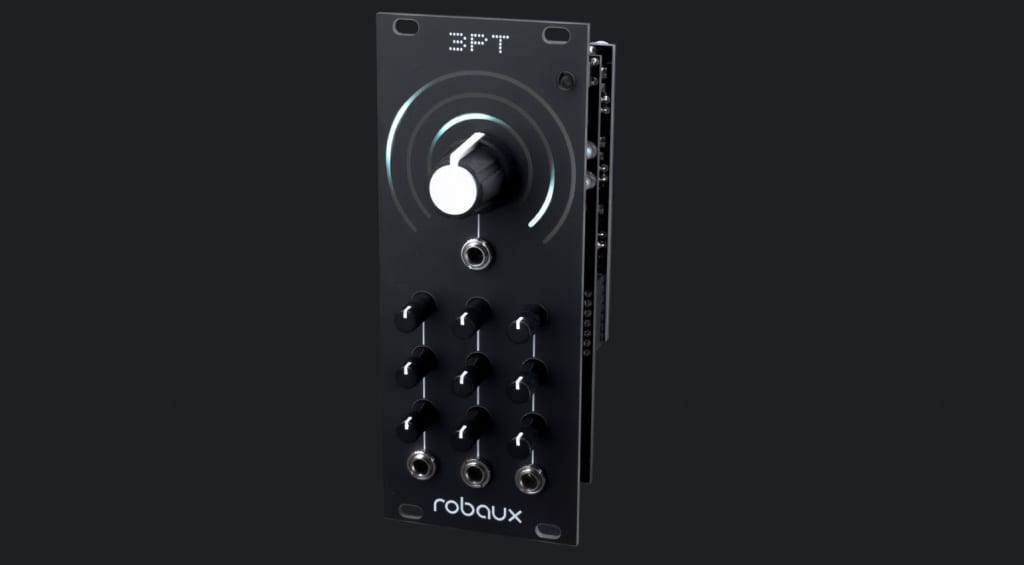 There are a lot of ways to mix in Eurorack but it’s also an area that’s forever evolving. Cosmotronic found a sweet spot with their COSMIX 8-channel mixer module. It has 4 mono and 2 stereo channels, an auxiliary send and clickless mute switches. They layout is clear, well designed and easy to access; it’s a neat and tidy looking module. The special sauce comes in the aural enhancing analog overdrive circuit. It has separate controls over the low and high-end saturation and gives amazing spatial resolution. Each channel in the mixer can be pushed into overdrive by going past the white line; I really love that feature. It’s all thoughtfully done and brings a lot of extra oompf to some simple functionality. 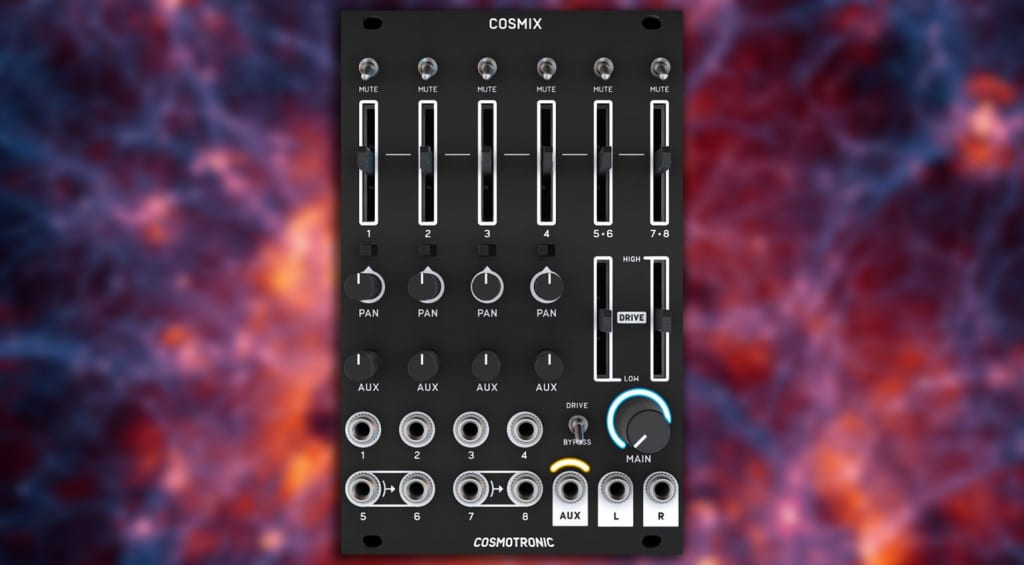 All Instruo modules are beautiful artisan creations of sound and voltage sculpting and so their presence in any “Best of” list is completed expected. This year they had an intriguing pin Matrix module but it was this quad oscillator piece of magic that caught my attention the most. 4 oscillators that are detuned relative to the first and addressed either together or separately. There are a number of modes by which the oscillators move and evolve and there’s this crossfader at the bottom that morphs wonderfully between ideas and possibilities. It’s joyful and elegant like all Instruo modules and elevates any rack in which it finds itself. 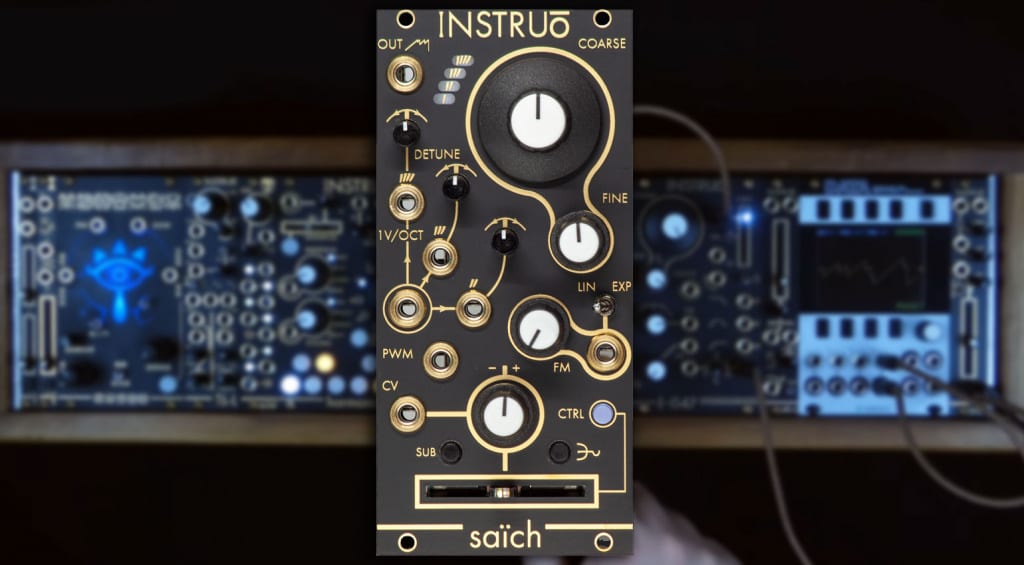 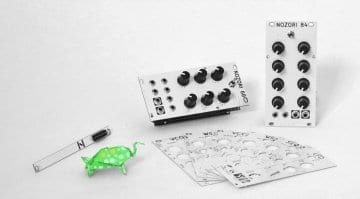 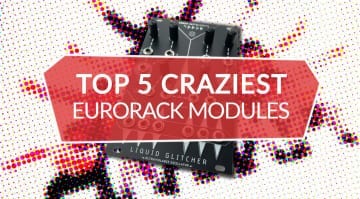