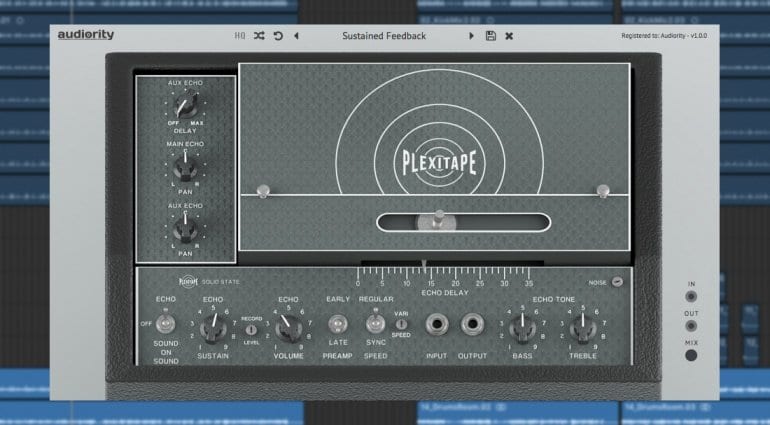 Audiority has released the PlexiTape plug-in, an emulation of the Echoplex EP-3 tape delay from the 1970s. The company says that it modeled every aspect of the original, while adding some modern features like a full stereo double delay line, and tempo sync.

2019 has been a good year for delay plug-ins so far, with exciting new releases by Pulsar, Klevgränd, Overloud, Valhalla, and K-Devices, to name just a few. Audiority is adding yet another one to that list with PlexiTape. The company is no stranger to modeling vintage magnetic delays, having already resurrected the Binson Echorec with the T7E plug-in. Its latest release brings another famed delay from the golden age of analog to your DAW, the Echoplex EP-3.

A vintage tape delay that is also a looper

Audiority says that PlexiTape models the EP-3 in great detail, including the motor, tape, FET preamp, and heads. There are two preamp varieties to choose from (early and late). The tape speed can be varied from 3 to 15 IPS, or synced to the DAW tempo, as a modern twist.

The echo can be deactivated, allowing you to use the plug-in for coloration by passing the signal through the preamp and tape only. Furthermore, PlexiTape also includes the original’s “Sound on Sound” mode. According to Audiority, this lets you bypass the delay and use the plug-in as a looping tape recorder. Interesting!

While the original was mono, Audiority says that PlexiTape features a full stereo double delay line. The main echo and aux echo can be panned individually. There’s also a 2-band EQ that lets you adjust the delay tone, and a control for the internal noise level.

Audiority PlexiTape is available for Windows (VST2, VST3, AAX, 64-bit only), and macOS (VST2, VST3, AU, AAX, 64-bit only). The introductory price is USD 29, down from USD 65. That offer makes the decision a bit easier, in case you’re wondering if you should invest in yet another delay plug-in. Free, restricted demo versions are also available at the Audiority website.