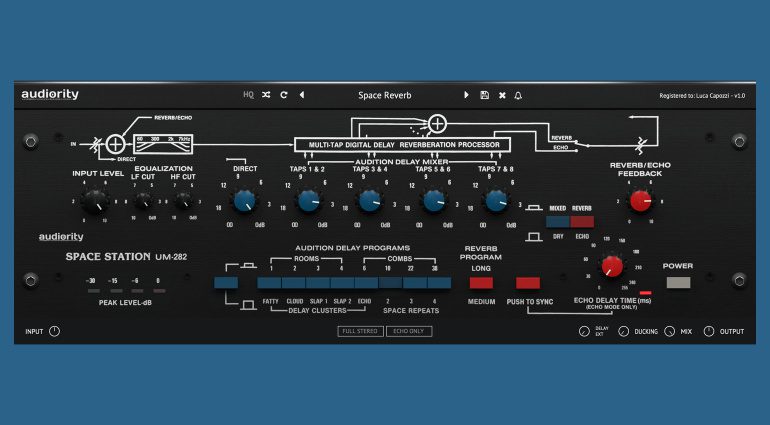 Audiority has released the Space Station UM-282 plug-in. Modeled after the legendary Ursa Major Space Station SST-282 from the early 80s, the plug-in brings one of the most sought-after digital echo and reverb units to your DAW. At a low intro price, that sounds like a clear winner.

About 40 years after its appearance, the Ursa Major Space Station is a true classic and one of the most sought-after digital delay and reverb units of all time. Producers around the world cherish it for its vintage vibe and timeless character. Audiority has set out to bring the classic sound to your DAW with the Space Station UM-282 plug-in.

Like the original, the plug-in uses delay taps to turn a mono signal into stereo echos and reverbs. Eight taps are used for listening and can be adjusted in pairs using the knobs in the Audition Delay Mixer section. The other taps are used to synthesize the reverberation.

The plug-in features 16 audition delay programs, which are divided among the Rooms, Combs, Delay Clusters and Space Repeats categories. The maximum delay time of 255 milliseconds can be extended to 2.55 seconds in long mode. This yields a maximum reverb time of 3.5 seconds.

Staying faithful to the original, the audio bandwidth is reduced to 20 Hz – 7 kHz, which is part of the classic sound. There’s also a pair of low cut and high cut filters for additional tone shaping.

In echo mode, the Space Station UM-282 plug-in syncs to the DAW tempo if desired. This makes it suitable for a wide variety of rhythmic multi-tap delay effects. Audiority has also integrated a ducking feature.

At the low intro price, Space Station UM-282 looks like a very cool addition to any producer’s plug-in folder. If you’re into characterful, vintage delays and reverbs, this one should definitely be on your list.

Audiority Space Station UM-282 is now available for an introductory price of €39. This offer is good through February 28, 2022, after which the price will increase to €65.

15 May · It seems now more than ever, in order to be considered a proper guitar player, you have to at least strive for a real vintage guitar, especially among youtube guitarists. At some point they all make a...

15 May · I doubt this is the biggest reason that lead to Gibsons failure, but one thing I haven't seen mentioned enough is the other concurrence that Gibson is facing aside Fender - specifically due to their ...

15 May · Actually every teenager in the 80's wanted a Les Paul. I had a Custom, it was beautiful and sounded great. Yes Gibson would keep up with times having new models such as a "vagi" line for the youth of ...