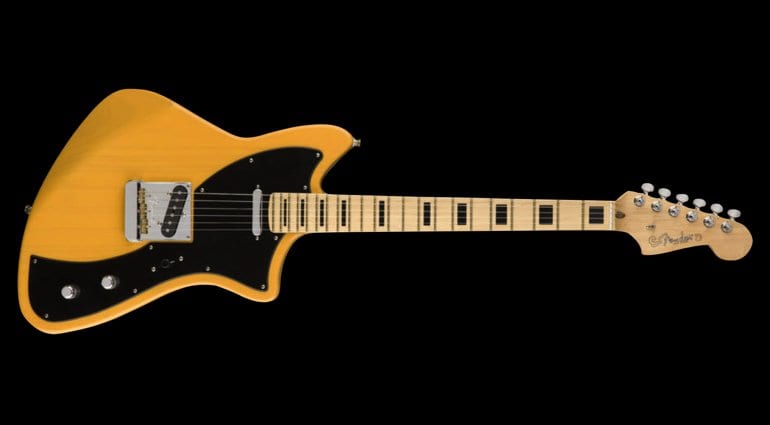 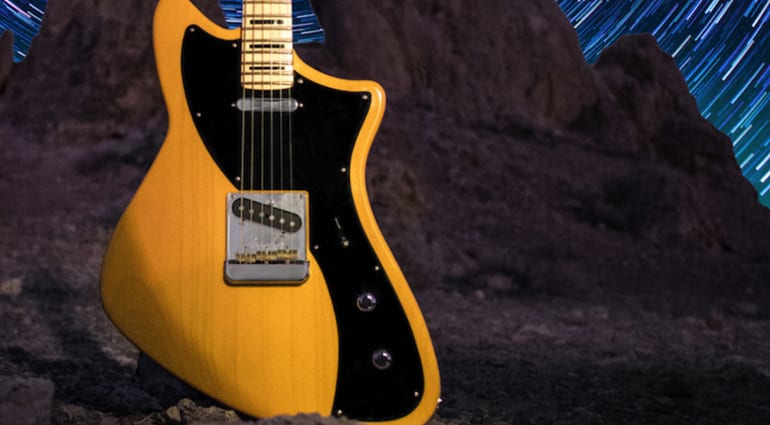 I may well be the first writer on the web to have leaked the Fender Parallel Universe Meteora earlier in the year. Well, now it is finally official and getting released to the masses at last.

Even if the design seems somehow familiar, we’ve not quite seen this kind of thing before. It’s a kind of sleeker Jazzmaster but a bit edgier. It reminds me a bit of the performer models. In 2011, the first prototype was introduced as Voyager and now it goes into production.

There are two CS Tele pickups with high output, an American Professional Tele Bridge – unfortunately only with 3 saddles – and the Butterscotch Blonde finish that many players love and associate with a more traditional 1950s Telecaster.

Under the nitro lacquer and the black pickguard Fender has unsurprisingly paired with an ash body, the neck is maple and is modelled after the mid-60s C-profile necks with 9.5 “radius. So standard specs here; it should very pleasant to play. The saddle is made of bone and the neck plate is minimally angled.

My only major dislike is that I don’t think the Stratocaster style headstock really suits the Meteora.  I actually think a more traditional ’50s Telecaster one would have looked better. I’m actually quite partial to the big black block inlays on that maple fretboard. However, I have heard a lot of players were a little put off by these.

When I originally wrote the article about the Meteora back in January of this year, we got a lot of comments about its design. And I still think this guitar will divide opinions for many years to come.

I’m actually a bit of a fan of this guitar. But I think the price is a little too expensive for me to order one. However, if they don’t sell I would probably try and pick one up on the cheap in the sales… 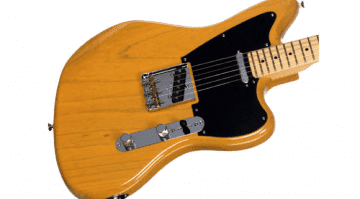 Each their own of course, but to be honest, the black inlays are horrible. First off they are too black and secondly they should’ve gone for some spacey shaped dot inlays (Meteora being the same eh) Imo a more angular new shape headstock would’ve fitted better, but this one’s better than a small Tele one (as that one was always just too small even for a real Tele).Don’t get either why they put the selector switch yet again in that oh so annoying position. Wonder when this will be available as HH for a more reasonable price (it being just a painted plank).

Not a fan of the Strat headstock either, nor the black fret markers.
Other than that: TAKE MY MONEY, PLEASE!

I have been waiting for this geet to hit the retail market. I got mine from a store on Ebay for 1759.00 including shipping. Personally, I like the Jazzmaster/Tele mashup. And I also like the headstock and the black inlays. The sound of the pickups is gorgeous. It can chunk and thump with the best of them. Watch the video of Jim Root playing one (blindfolded in the beginning). He wanted to take it home and said he would play it live. This Tele mashup goes with my small collection of Fenders. 2 Strats, and a thinline, Mexi Tele w/Bixby and now the Meteora. Another very nice thing for an old guitar player like me, is that the Meteora is lightweight. I’m in love with it.

Yeah, I’ve seen that video. I’m tempted myself to order one, as I kind of like the aesthetic and love Telecasters. I already own a Jazzmaster with black blocks on a maple neck, so it wouldn’t be out of place in my guitar collection.

The Meteora is nothing but a poorer quality copy of the J.Backlund Design JBD-800 series. which was first released at the Summer 2010 NAMM show in Nashville