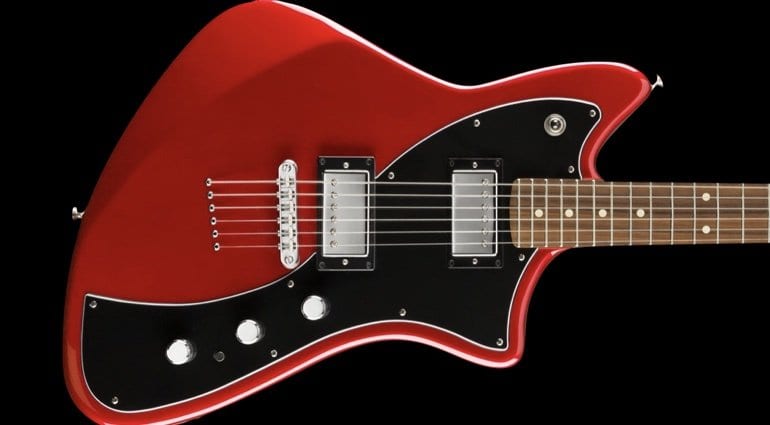 Fender announced at Winter NAMM 2019 that it was launching a new Alternate Reality Meteora HH model – and now it’s finally available and ready to rock!

The guitar looks a bit like a modern day interpretation of the classic Fender Jazzmaster. A bit edgier, but just as special. The characteristic pickups and the floating tremolo of the offset models are missing though. Instead, you get a pair of Player humbuckers, TOM bridge and a string thru body design. That’s potentially a great formula for a guitar to rock out with.

The Meteora HH comes with an Ash body, a maple neck with Modern-C profile, Pau Ferro fingerboard that has a  9.5 “radius and 22 frets. Standard Fender specification, then. A proven formula. The pickup selector is up on the top horn. Then you get a Volume for the bridge pickup, a Volume for the neck pickup and a Push/Push Switch that reverses the order of volume controls. Finally, there’s a Master Tone with a Push/Pull for coil splitting those humbuckers. nice!

The Meteora HH comes in  three colours: Lake Placid Blue, Surf Green and Candy Apple Red. I personally think that they all look great and work well with the body shape. I think that I also prefer these to the Parallel Universe versions from last year’s models this guitar is based upon.

These guitars are designed and built in California, USA. It makes me happy to see Fender making such great looking instruments. Check out the official video demo below to hear it in action.

I think if push came to shove I would have order a red one. Or maybe a blue one… Wait…