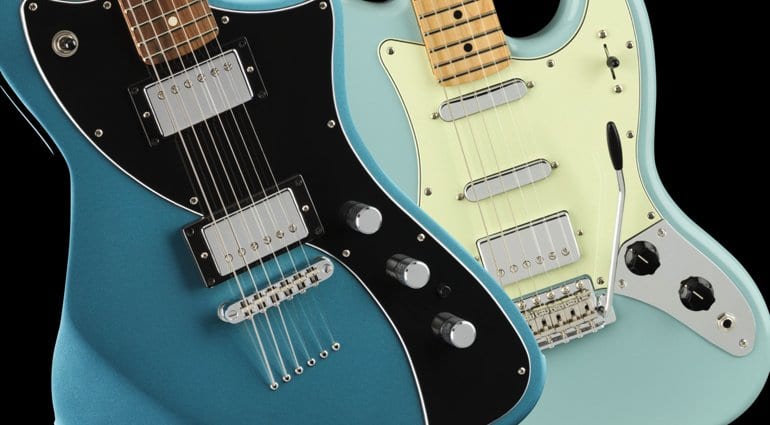 Now, these two new Fender Alternate Reality models the new Meteora HH and Sixty Six look a little more like what we want from the Californian guitar giant.

The new Meteora HH is an updated version of last year’s Parallel Universe release and comes loaded with twin Player Series humbuckers, hence the HH in the name. There are a few tweaks other than those pickups though including an Adjusto-matic bridge with a string-through-body design, rather than an ashtray Tele style bridge.

With a maple Modern-C profile neck and a nice Pau Ferro fretboard with 22 frets, it should play nicely.

The guitar is an alder body with a Modern C-shaped neck profile and a comfortable 9.5”-radius fingerboard. You can order this new one in Candy Apple Red, Lake Placid Blue or Surf Green.

The new Sixty Six reminds me a little of John Squire’s bastardised Fender in his early Stone Roses days, the one he had custom built. Anyway, it is actually a down-sized Jazz Bass ash body with an HSS layout. Again it is a Modern C-shaped neck profile with a 9.5”-radius fingerboard. But this time it is maple with  22 medium-jumbo frets and 25.5:” a scale length.

The pickups are a Player Series humbucking pickup in the bridge position and two Player Series single-coil Tele pickups. The bridge is a standard Strat style affair with six vintage saddles and it sits nicely into the overall aesthetic design of this model.

You can order this model in Natural, Daphne Blue or 3-Colour Sunburst

In my humble opinion, these two new Alternate Reality models get it right, unlike that hideous new Powercaster model that I wrote about earlier today. I liked last year’s Meteora model anyway and so this evolution works well for me and the new Sixty Six just looks retro and cool.

Does this all mean we will get Parallel Universe and Alternate Reality model every year now from Fender? As it is all a bit Back To The Future for me!

21 Jan · Wow what unkind for steinberg users, it's Steinberg's choice. Two years ago moved to reaper. What a relieve;0)