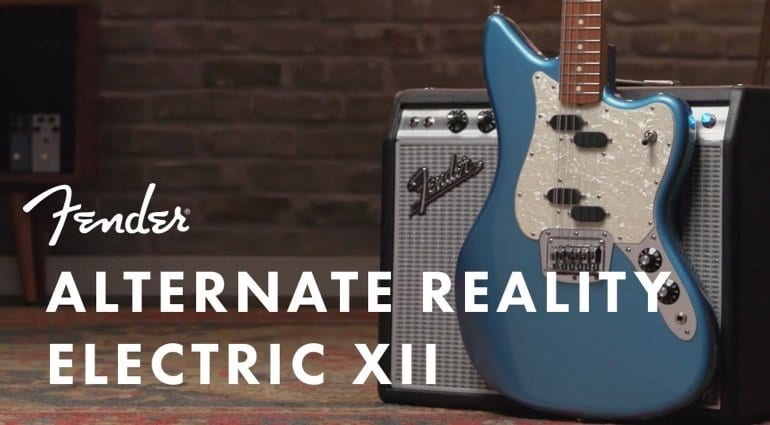 This time, it took a little bit longer before the leaked product was officially announced. But the wait was worth it, because the coveted Fender Alternate Reality Electric XII is even cheaper than hoped. But does it sound any good?

What do The Byrds, Velvet Underground, The Who and of course Jimmy Page (at least on Stairway to Heaven) have in common? They all took up the Fender Electric XII, which debuted in 1965. This electric 12-string and its unique design became popular for a time during the late ’60s. However, demand tailed off and production was stopped after just five years.

So what’s the Alternate Reality Electric XII all about? The foundations are an alder body, a modern C-shaped maple neck with a pau ferro fretboard.  Then you get vintage style, slightly ‘ugly duckling’ hockey stick headstock. Odd as it looks compared to other Fender headstock designs, it is vintage-correct.

The split-coil pickups were specially developed for this guitar, Fender says. Instead of a four-position rotary switch, the new guitars have been fitted with a handy 3-way toggle switch. Volume and tone complete the control set-up. Fortunately, the hardtail bridge has 12 individual saddles, which is a huge help for keeping the intonation on track with so many strings.

These 12 string guitars are notorious for being a pain in the rear to set up. So if you’re thinking of jumping onto the 12-string bus, be warned! Especially when it comes to changing strings or string gauges…

I think the official demo video doesn’t sound that great to my ear. But that could just be the recording setup being used for the video. In the last 10 years or so, I have only played a handful of original ’60s Fender Electric XIIs and they were all a little temperamental, with some not playing well with certain recording set-ups.

The new Fender Alternate Reality Electric XII  is available in Lake Placid Blue, Olympic White and 3-Tone Sunburst finishes. I’m going to have to try one of these out myself at some point, as 12-string guitars can be a lot of fun to play, even if they are a PITA to setup!