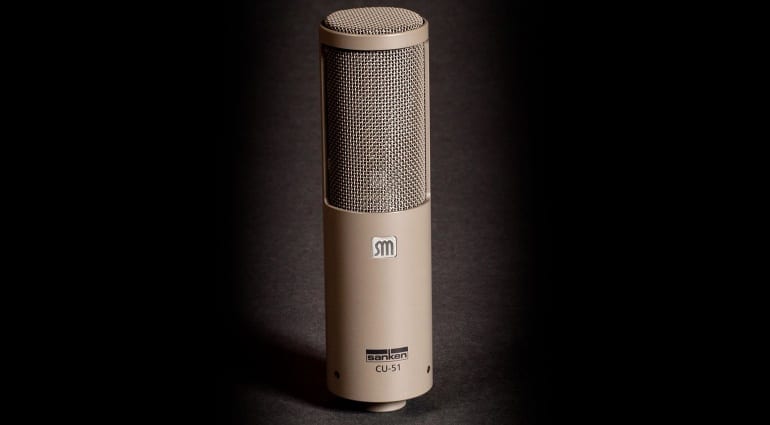 Sanken, the renowned microphone company from Japan, are releasing a new studio mic. The CU-51 brings some interesting new technology which I haven’t seen in this fashion before. But: damn, is it boring and ugly to look at.

An expensive studio condenser mic is normally a thing of beauty. I guess Sanken have followed the stereotypical look of large-diaphragm studio mics, but that colour paint can’t have been available in hardware stores since the 70’s. The casing looks like it was found in an R&D out-try, and rushed to market. It’s a shame as Sanken who were first established in 1926, have the pedigree to carry-off a vintage style. Equally the tech involved here could have been matched with a modern contemporary design. Let’s hope it sounds the part if it can’t look the part.

The tech inside the CU-51

Behind the un-inspiring exterior, there’s some interesting technology at play here. We’ve seen dual diaphragm mics before, recently from the likes of Shure with the KSM9 and KSM8. However, these are live microphones intended for the stage, so I believe the CU-51 is the first time we’ve seen this idea in a large diaphragm studio condenser mic.

The dual diaphragm inside the CU-51 is also slightly different to anything we’ve seen before, as one diaphragm is designed to capture the lower frequency content, whilst the other takes care of the high frequencies. Sanken state that they guarantee the phase coherency between the two capsules. One benefit of dual diaphragm mics is the ability to minimise the proximity effect, giving way to a larger and more transparent sound.

Another feature unique to the CU-51 is the minimal off-axis colouration. Apparently, the mic will stay true to it’s frequency response all the way round to 90 degrees, which is impressive. Couple this with the low proximity effect, this should give vocalists the freedom to move around more and use greater mic technique. The frequency response appears to be surprisingly flat too. The two diaphragms are made from Poly Phenylene Sulfide, which is said to be resilient to humidity and changes in temperature.

I just hope all these claims are true and the tech delivers on it’s promises. Being a fan of the KSM9, I’d love to try a dual diaphragm mic in the studio, and I love the minimal off-axis colouration. Let’s be honest though, it needs to sound better than it looks.

For more information about this new addition to the Sanken Chromatic range, visit the webpage. Prices aren’t clear yet as I think UK distributors will unfortunately be some of the last to receive any stock. However, one web site is already suggesting a price of around 2,400 EUR, which shows this is a serious piece of kit.