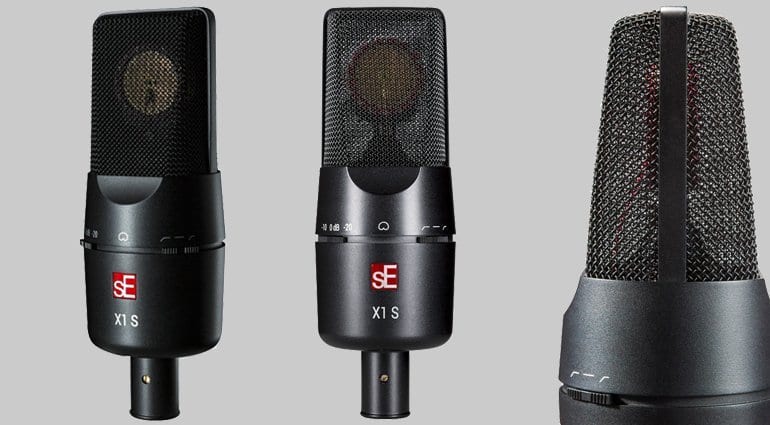 Last year we saw sE Electronics release an improved version of their popular X1 studio condenser microphone, the X1 A. Now they are presenting a third revision, the X1 S, a name which you’d expect to see on an iPhone. Like the X1 A, the X1 S offers even greater SPL handling, but sE are calling it the new ‘gold standard’. Can this really be true?

The X1 has always been a viable large-diaphragm studio condenser microphone if you’re on a budget. Here now in its third revision, this is still likely to be an attractive solution for many. The numbers look good too, with this latest version stating an SPL rating of 160 dB’s. That’s quite impressive for a studio-style condenser mic, especially considering the original model achieved just 125 db’s.

There are new features on the X1 S which sound useful too, such as a three-position attenuation switch and two high-pass filters. For me however, a high-pass filter on a microphone at 160 Hz sounds unusually high. This fills me with concern for its low-end frequency response and potential noise floor. It is, however, great to see an all-metal body, as on the X1 A.

sE, however, are labelling this the “new gold standard”. This is because the capsule inside the X1 S sports a ‘gold-sputtered’ diaphragm. This isn’t actually as unique as sE might like you to believe, though, as most large-diaphragm condensers built in the same way. I also don’t think it deserves the title the “new gold standard” because others have already beaten them to it. For example, the cheaper AKG C3000 has a very well-known ‘gold-sputtered’ capsule, and is a pretty good standard, if you ask me.

The sE X1 S will have a a suggested retail price of 249 USD / 249 EUR. For more information, visit the sE webpage.

Here’s sE Electronics’ promo video for the X1 S on their YouTube channel. It doesn’t provide any listening or demo examples unfortunately, mostly just acting as an advertisement.