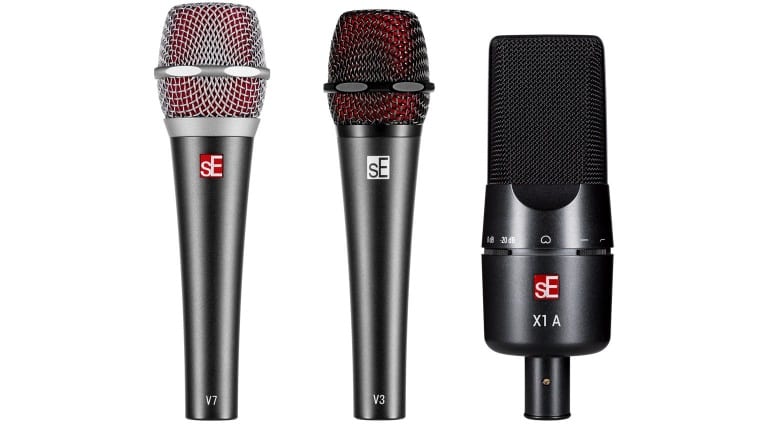 The X1 microphone has proved hugely popular for sE as one of the best studio-style condenser mics in this price range. Now sE are releasing the X1 A, which further refines the design with some impressive specifications. We also welcome to the dynamic microphone world, the new V Series from sE Electronics. With great prices, we await the first reviews with interest.

There are two models in the new V Series dynamic range, the super-cardioid V7 and the cardioid V3. While these mark sE’s entry into live sound, they can obviously be used as other well-known dynamics for recording applications too. The V7 appears to be designed for “crisp” vocal sounds, while the V3 is more of an all-rounder for typical vocal and instrument applications. Priced slightly either side of the industry standard SM58, these mics are in-line with the market but they must offer a more refined or tonally different character. I suspect that the V7 will perform better than an SM58 for vocals but time will tell when it comes to reliability.

The X1 studio condenser mic from sE has proved to be very successful. This is partly because of it’s low price point, but the audio quality is actually quite respectable. I’ve even used an X1 on a couple of occasions and it worked alongside other microphones regarded to be more professional. I never imagined it to be amazing, but for the price you simply can’t complain about it. Now sE are effectively releasing a second revision called the X1 A.

The new model will feature a newly-developed capsule that is capable of an incredibly high 150db SPL. This is really impressive for a studio condenser and ideal for anyone who hasn’t gained much experience using a studio style condenser before. The new X1 A will also feature “an integrated windscreen and a gold-plated XLR connector”. There’s a danger with a windshield and high SPL rating, that there will be a lack in sensitivity and clarity. However, I’m sure sE have worked a lot on this design by now. It will be interesting to read user reviews over the next month.

For more information about the V Series dynamic microphones, visit this webpage.

For more information about the X1 A Studio Condenser microphone, visit this webpage.

Here’s a 60 second trailer from sE Electronic’s YouTube channel about the X1 A: