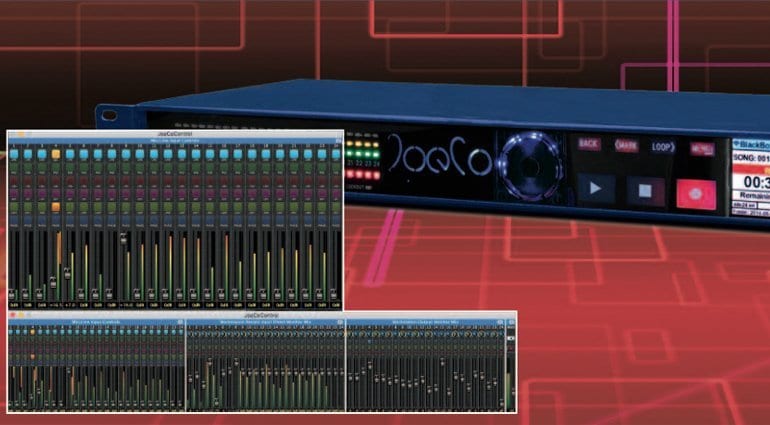 It looks like this year’s NAMM show will see some fierce competition in the category of ‘sensibly priced’ audio interface solutions. We’re already aware of Focusrite’s Scarlett OctoPre unit, a cheaper version of the Clarett interface. RME recently announced a new UFX II, following in the footsteps of their flagship UFX+. And Roland announced their Rubix range of budget audio interfaces. Now JoeCo take to the stage with their ‘most affordable’ BLUEBOX interface yet, the BBWR24B.

Last year at IBC, we saw JoeCo introduce their BLUEBOX range of audio interfaces. These interfaces build on many of the technologies JoeCo developed for their BlackBox range of recorders, offering studios some interesting features. Most notably is the ability to do direct multi-channel recording to USB mass storage devices, as well as operating as a USB interface. The RME UFX and UFX II are the only other interfaces I’m aware that present this feature. This provides a back-up recording solution should your DAW freeze. It also enables simple recording setups for field recording, capturing multi-channel wav files that can then be imported into a DAW afterwards.

The BBWR24B has 24 balanced line inputs, 16 ADAT inputs with SMUXII support for higher sample rates and 24 balanced outs, all in a 1U rack space. The highest sample rate the BBWR24B supports is 96kHz, which should be more than acceptable for most applications, but it’s interesting to see most other manufacturers now offering 192kHz. There is also due to be a ‘significant’ update to the JoeCoControl app, for monitoring levels and making monitor mixes also coming at NAMM. It will be interesting to see what functionality it will support when details become available as JoeCo now have a lot of experience of supplying remote control functionality.

This could all add up to be a successful release for JoeCo, as there isn’t another product with quite this specification. There are others which offer a combination of similar features, but the BBWR24B is alone in offering this arrangement and count of channels, remote control and direct USB recording.

The success of the BBWR24B will of course come down the the price which hasn’t been announced yet. Judging by the prices of the other models in the range, and bearing in mind that JoeCo are marketing this as their cheapest BLUEBOX interface, we must be looking at something close to 2,000 GBP. I hope it’s on the lower side of 2,000 GBP, if nothing else as direct competition to RME and Focusrite, who hold stronger brand reputation. For more information visit the BLUEBOX webpage.