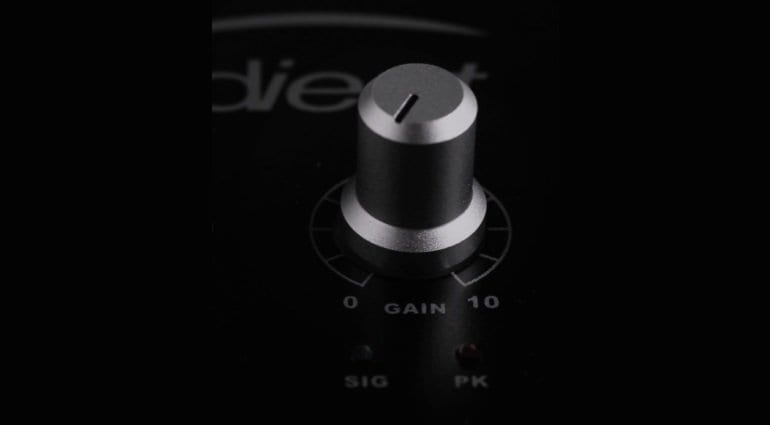 British audio specialists Audient have something new to show you...  ·  Source: Audient

Ahead of the NAMM 2018 musical equipment conference in California, British audio equipment manufacturer Audient published a teaser image on its Instagram account, offering a glimpse at a new product it’s about to showcase at the event. There isn’t much going on in the photo – there’s only a Gain knob and a pair of LEDs to look at. Clearly, that’s either a new audio interface, or mic pre in the making.

Our bet is on the former, as what we’re seeing in this image matches Audient’s audio interface design, which is fairly distinct. In comparison, the company’s mic pres are styled differently – they are silver, instead of black like the audio interfaces are, and they are only available in rack unit format. So now that we’ve established an interface as the most likely turnout, we have ample room for speculation.

Looking at Audient’s current range of audio interfaces, there’s a notable lack of products geared towards the big studio niche. The manufacturer has small and mid-sized studios covered with the iD4, iD14, and iD22 interfaces, but its catalogue is in need of a 16, 32, or 64-out unit that’s able to handle complex connectivity and perhaps fit in a rack. That’s a possible direction for Audient to go in, especially considering its rivals from Focusrite and PreSonus just outed some new products targeting this very market, at notably competitive price points. It’s high time for the Brits to establish themselves in the 16-plus outputs interface niche, and they could easily end up making their move towards it at this year’s NAMM.

We have no reservations whatsoever in regards to Audient’s ability to fill out an audio interface with all the necessary hooks and connections. With its significant experience in manufacturing analogue mixing consoles and other studio equipment, the company is no stranger to the tech required here like insert sends, ADAT, S/PDIF, not to mention some – by all accounts – great-sounding proprietary mic preamps. So we are certainly interested in what Audient has to announce at this year’s NAMM.