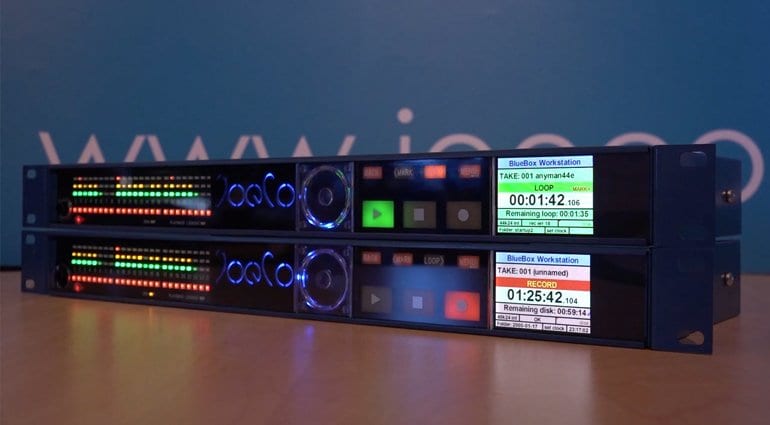 JoeCo are expanding their product portfolio with a new line, the BlueBox range. They are drawing on the success of their BlackBox recorders, ultimately adding an interface solution for Mac and PC systems with remote control capabilities, even via iPad. As a result, there are some interesting features on offer here, but are they for everyone?

Both units are capable of 24 bit, 96kHz resolution digital audio and con connect to Mac or PC systems as your main audio interface. Drawing on JoeCo’s developments with their BlackBox Recorders, these new interfaces also offer direct recording capabilities onto external USB2 storage. This is actually reasonably unusual for an audio interface today, and provides a back-up recording solution which might be useful on location. If recording in the ‘field’, then your computer isn’t needed resulting in less equipment required. These new BlueBox interfaces can also run from a 12V battery just as the BlackBoxes do, which really does offer ‘field’ use with a high channel count.

I think these new units look great and offer some un-seen features, not commonly found amongst the main audio interface market. For example, having 24 mic pre-amps and 24 line level inputs and outputs in a single 1U rack space is great. The stand-alone features as a recorder for either live scenarios or as a backup is a bonus. If features like these are what you need, then there’s not much to compare these too. By presenting everything on D-Sub connectors though, I believe that these 1U devices suddenly loose their attractiveness as portable devices. They will work as installed interfaces in a studio, or to record a live band in a venue, but not as comfortable to setup in a studio just for the day.

For more information about these new interface/recorders, visit JoeCo’s webpage about the BlueBox range. Prices haven’t been made available yet, but considering their BlackBox 24-channel recorders are around the 2,000 GBP mark, these can only be similar. Unless you require one of the option cards available for the BlackBox range such as Dante, I imagine these new ‘BlueBoxes’ will become the favoured choice from JoeCo.

Taken from the JoeCo YouTube channel, Francis Duggan from JoeCo highlights the features of these new interface recording systems.