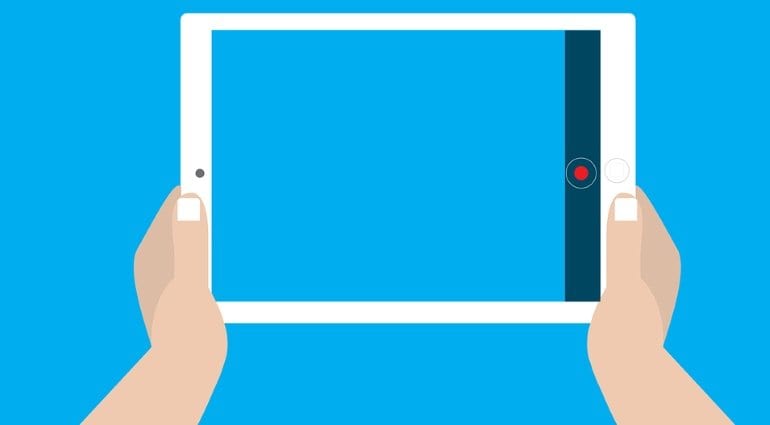 For all the abundance it offers nowadays, the world of music technology is stuck between a rock and a hard place. Music gear big shots demean the brilliant minds they employ with marketing-driven products, stuffing decades-old tech in ever shinier boxes. Aspiring producers would rather do cost/benefit analysis of $1500 hardware samplers on GearSlutz than bash out beats. Amidst these anomalies, the Apple iPad quietly became an ever-expanding universe of musical expression.

Yup, the same gizmo mom uses to check for recipes! It can now replicate every known musical sound since the advent of recorded music. It can also make a fair bit of noise entirely of its own! Creative developers are still exploring the touchscreen’s unique properties as a musical controller. The iPad is also the leanest, meanest porta-studio you’ve ever owned. High-quality, self-contained apps can be had for the price of a pint with fries on the side. This is how the doors to music production are being busted wide open! Anyone interested in the art, but rightfully scared of intimidating and expensive tools can get started.

The iPad is the future of music making happening right now. And at $329, it’s become budget gear. $329 – that’s two Volcas and a blunt!

Coining such profound statements gave me an epiphany. Maybe I should do marketing for Apple and get paid sweet Apple money! No, I’d rather crash their HQ, throw the cat out the window, flex before the cute secretary for a tiny bit, and tell them – and you – why the iPad sucks.

Imagine the world’s biggest, dopest recording studio. It’s stocked with every instrument and effect ever made plus a clone or two of each item. You’ll have to bring your favourite external mic, though, because the one in there is only good for FaceTime and Siri. But still – everything’s powered up, LEDs flashing like Christmas lights, raw inspiration oozing from every corner. 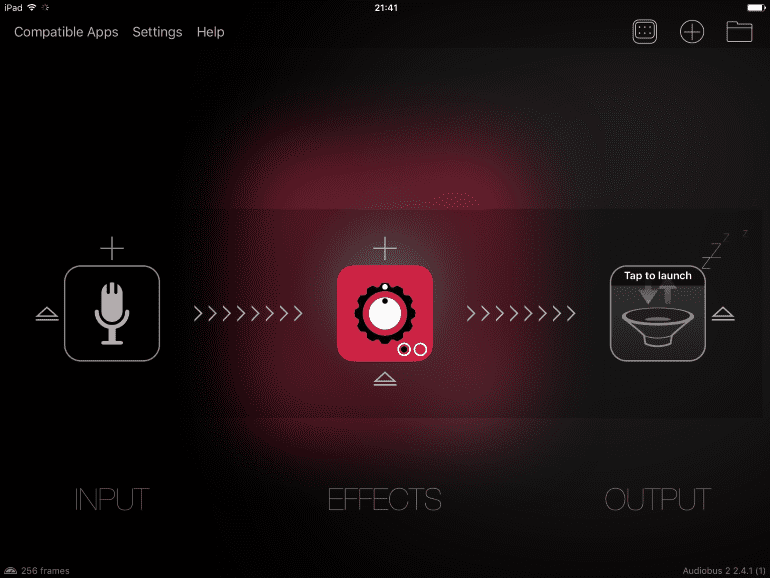 When it works, Audiobus for iPad can get the signals going.

You reach out to record a synth line through some effects into the rig – Cubasis, Auria, whatever. No dice! You check behind the racks to discover not a single cable is taut between the assorted bits of luxury gear. They can’t hear or understand each other. There’s no signal flowing.

So you’ve got a bunch of cables hanging on the wall. They are branded AudioBus, Inter-App Audio, MusicIO, JACK, et cetera. All of them will do the job, but not for every gear and signal situation. You spend a lot of time trying each one out, noting what works, what barely works, and what doesn’t work at all.

By the time you’ve hooked things up, most of the inspiration is gone. It has been converted to eyebrow sweat by the biological process known as frustration. And you still couldn’t make Gear A talk to Gear B, though opting for Gear C will suffice. Moreover, when you turn to operate one particular piece of kit, the others completely disappear from your sight. You’re doing more switching around than Taylor Swift does with her boyfriends!

Still, you notice a sweet effects unit called FLUX:FX. It cost $15 on sale and it’s masterminded by Adrian Belew. He’s an elder statesman of R&R who played with Zappa and King Crimson because he made the guitar sound completely unlike a guitar. And that was back when his peers thought hot-rodding Marshall amps was cutting-edge! 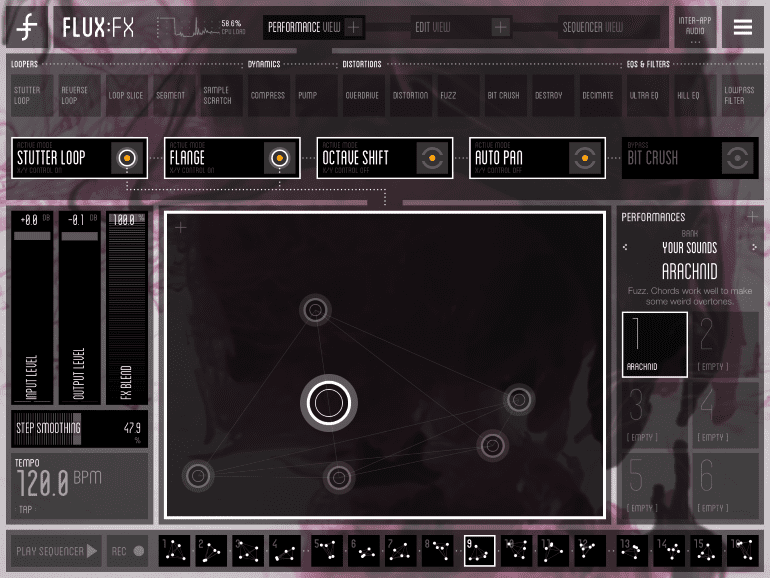 FLUX:FX for iPad is a trip!

You’re in the mood for experiments and want to run some vocal snippets through it. But all your recordings are stored in a dark facility that you are forbidden from entering, forever – the iPad’s file system. It has been sealed off by Apple, because letting users do file management means less time spent buying stuff off iTunes. Nice! Just to be clear, you can download a third-party File Manager app and get around some parts of the storage. But since iOS is designed to be handled with white gloves, doing stuff like this makes you feel straight up dirty. It’s like breaking into the sacred chapel! 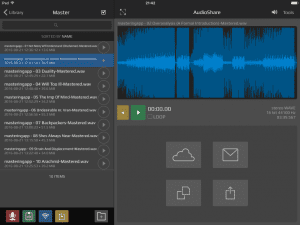 When supported by apps, AudioShare can be a lifesaver.

Anyway, you line up two boy scouts named AudioCopy and AudioShare – they can enter the dark room and retrieve the audio you need. They can even play it back so you can use Inter-app Audio to feed it into FLUX:FX. Thankfully, this particular unit has a built-in recorder – many don’t. Even though you don’t really know where the recorded audio is stored, at least you don’t have to spend another 30s to a minute hooking up to a dedicated recording unit via, say, Audiobus.

The lack of a seamless, universal, and consistent standard for beaming audio, MIDI, and controller data between the iPad’s fantastic apps is maddening. All this goodness at your fingertips, yet an utter ball-buster of a workflow! If someone clever solves that, the iPad will become the ultimate portable groovebox on post-human level steroids!

Of course, there are apps like iMPC Pro, iMaschine, Beat Maker, and Caustic that are great self-contained battlestations and basically tons of fun. But they kind of expect you to make do with a bunch of stock samples and sounds, unless you want workflow trouble. That’s kind of a bummer if you are about finding your own artistic voice, rather than toying with the same material a hundred thousand others are bastardizing along with you. There’s also ModStep, good old Genome, and a bunch of other sequencers. But just like audio routing apps, they are hit and miss. 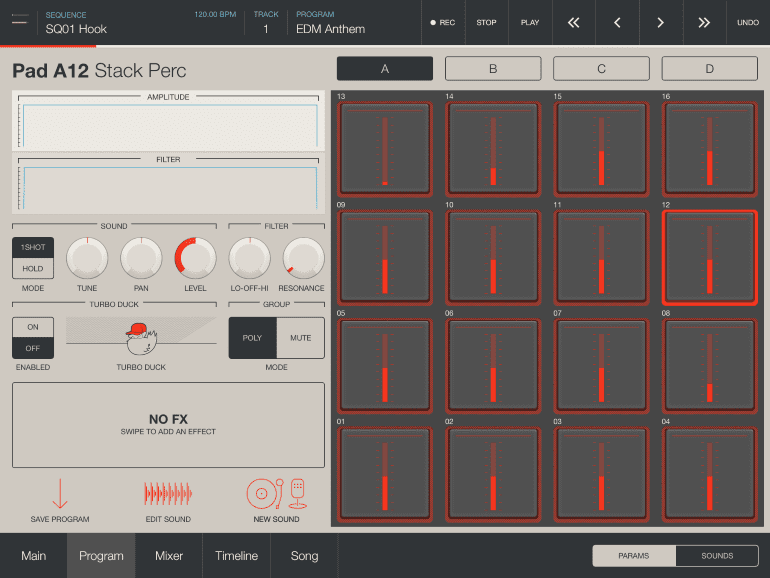 Don’t get me wrong, I love my iPad like Gucci loves lean. But don’t ask me to complete a record from scratch on it, unless we’re talking the kind of basic rap and techno tunes the world has gotten enough of already. I’d rather sequence late 80s electronica on an Atari ST, thanks all the same…

What’s your opinion on the iPad as a music-making tool? Let us know in the comments below.