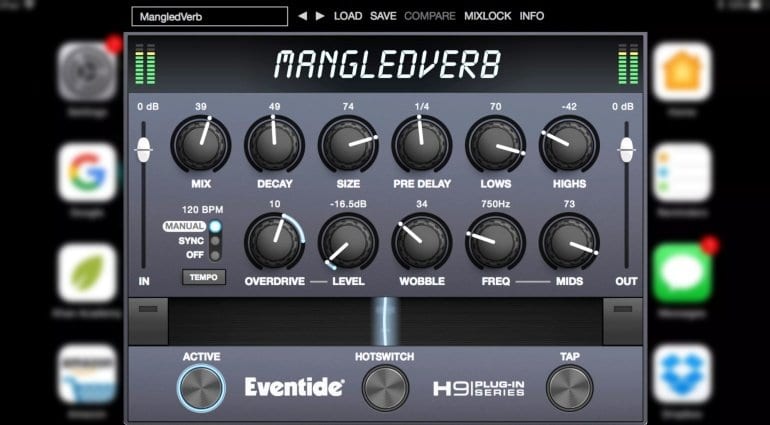 Those crafty folks at Eventide have brought the Mangledverb reverb algorithm to the H9 Signature Series plug-ins on Mac, Windows and now iOS. Originating with the rackmount Eclipse and ripped straight from the H9 Harmonizer hardware units, MangledVerb combines reverb and distortion for an edgy space processor.

Per the manufacturer’s words, MangledVerb presents a variable pre-delay going into a stereo reverb and then into a distortion algorithm. It can scrape and growl, with plenty of other attitudes in between. It also features a ribbon control to let you program two combinations of parameter settings and blend between them. An additional HotSwitch lets you launch an alternative setting with the press of a button.

For a more traditional look at MangledVerb, the plug-in is designed like a hardware effects pedal and is split in two rows of parameters – the reverb and distortion. The reverb section has the typical Mix, Decay, Size, Pre-Delay, Lows and Highs controls while the distortion gives you Overdrive, Level, Wobble, Freq and Mids control. So both effects can be tweaked and shaped into what you’d like them to be. A nifty visualizer and input/output gain faders are there as well. Finally, there’s a tempo control for the pre-delay. It can be manual (with tap tempo) or sync to the DAW’s project BPM.

With two processors combined, MangledVerb can be used in mono in – mono out, mono in – stereo out, or stereo in – stereo out configurations. It ships with 180 factory presets crafted by the likes of Richard Devine, Vernon Reid, and Chris Carter, to name a few. MIDI control is offered for all parameters, including the Ribbon and Tap Tempo controls, so Mangledverb is good for live performance with a MIDI controller. There’s also a convenient Mix Lock feature to scroll through presets while keeping your wet-dry mix consistent. Finally, presets can be shared between the Space, H9 and MangledVerb plug-ins in your projects.

05 Mar · How are they still getting away with using the Auratone name? That's one that particularly irks me..