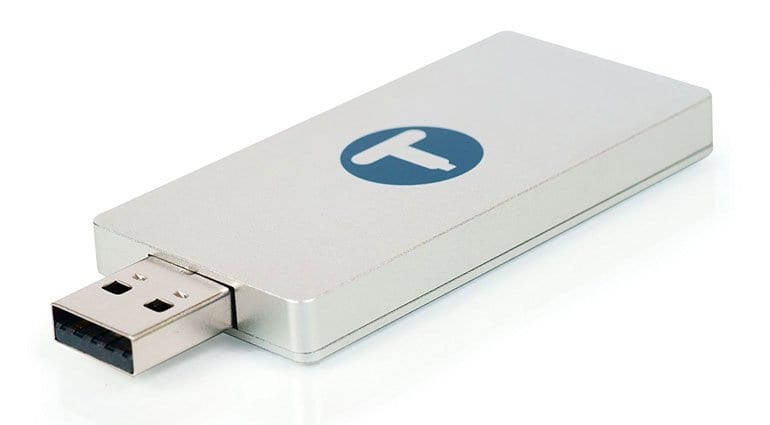 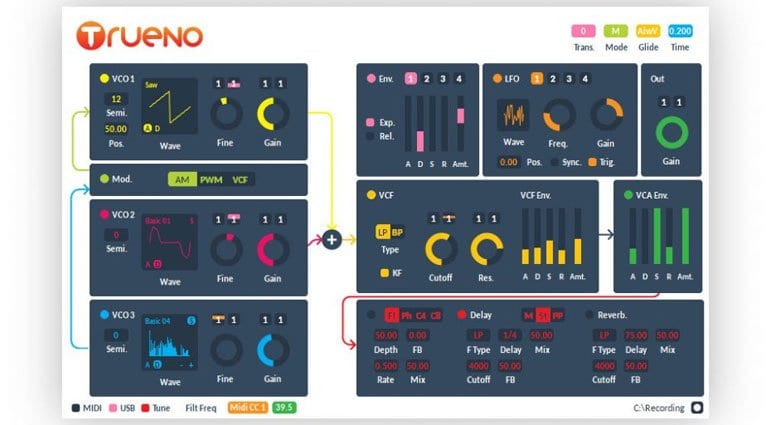 It may be a very dull looking USB thumb drive dongle thingy, but inside the Trueno is a 3 oscillator analogue synthesizer.

It’s basically a hardware synthesizer with a software plug-in interface instead of a front panel. The circuitry is small enough that they decided to squeeze it all into a thumb-drive sized enclosure. There are no audio sockets or controls, knobs or buttons. It just plugs right into a USB socket and everything else is done in software.

So, if I’m understanding this correctly, they’ve taken everything that’s awesome about analogue synths – the knobs, the control, the patches, the tactile interactivity and thrown that away. Then because it’s a physical analogue synth it can’t take advantage of the awesome things about digital plug-ins like being able to run as many instances as your CPU can handle, or be installed on multiple machines. So they’ve removed the advantages of analogue and the advantages of digital and leave us with a decent sounding synth that doesn’t live up to the potential of either format. What’s that about?

On the other hand, it could be a great sounding synth, in a wonderfully portable form factor with cool DAW integration. I can see how a range of “synths-on-a-stick” could be an interesting idea, especially if it reduces CPU overhead and lets you access a whole bunch of fabulous sounds just by plugging in a USB hub. It’s like a more realistic version of the ridiculous X-BAY Ultimate Synth we saw a few weeks ago. But then isn’t that taking us into DSP territory, like the Virus running on the TC Electronic Powercore? That idea hasn’t stood the test of time mainly because our computers are very powerful and can run huge synthesizers without the need for expensive hardware DSP. But this isn’t that. Trueno is small, cheap and analogue.

Hmmm….. I can’t decide whether this is a terrible idea or a very shrewd one. They are a little bit disparaging about both the tactile nature of modular and the digital sound of plug-ins. They talk about “modular monstrosities” and how plug-ins can only “try to approximate the sound of analogue circuits”. So they are sort of alienating themselves from both communities while putting forward the idea that they have a non-monstrous solution that doesn’t approximate because this is real analogue.

It has 3 VCOs, but they are digitally controlled which makes them DCOs for all the pedants out there, with triangle, saw and pulse waveforms. The third DCO has noise as well. They also have a digital mode and can use any of the 256 included wavetables. You can create more wavetables with the built-in editor. Some oscillator modulation is available in the shape of AM and PWM and there’s FM for the filter. You can also use the wavetable waveforms as modulation sources. But then it moves into digital for the LFO and envelopes. Apparently dragging and dropping them with your mouse in the software is “way better than patch cables” – it’s comments like that that make me feel they are just a bunch of idiots. The lowpass and bandpass filter is based on a Polivoks design, which is cool. And at the end of the chain are some digital effects.

So really it’s just the oscillators that are analogue, which should give a great sound although even these have to pass through a 24 bit ADC in order to get into your computer as there’s no analogue output.

Of course they have to push their own product as something awesome, but the way they’ve put it across makes me feel that they’ve missed what’s amazing about analogue synthesizer technology. I’m sure it sounds great, but does it really sound so much better than some of the virtual analogue plug-ins we have these days? Because that’s the only advantage it has. If it sounds similar then the virtual analogue will be cheaper, more convenient and you can run a load at once. It’s cheaper than external hardware analogue but we seem to be fine with paying extra for a nice enclosure, knobs, controls and patch points.

For me, it’s all about the hands-on control. It’s actually the act of discovering sound, patching things together, moving knobs with my fingers and it being temporary that has captured my imagination about modular synthesis. It’s that more than the actual quality of the sound. So, for me, Trueno takes away everything I like about analogue and makes using plug-ins (which I also like) less convenient. But, dammit, it still feels like an interesting idea! But couldn’t they have made a range – so an SH-101, an Arp a Model D, each one on a USB stick? Maybe they will, that might be interesting. What do you think?

Trueno is available now from Amazon for GBP 139.99. It comes with the VST/AU plug-in and standalone software for MacOS and Windows. You will, of course, need a decent audio interface in order to appreciate the sound. 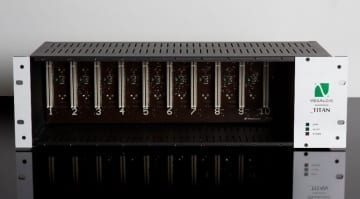 i think this could be really cool. Especially on a microsoft Surface device.