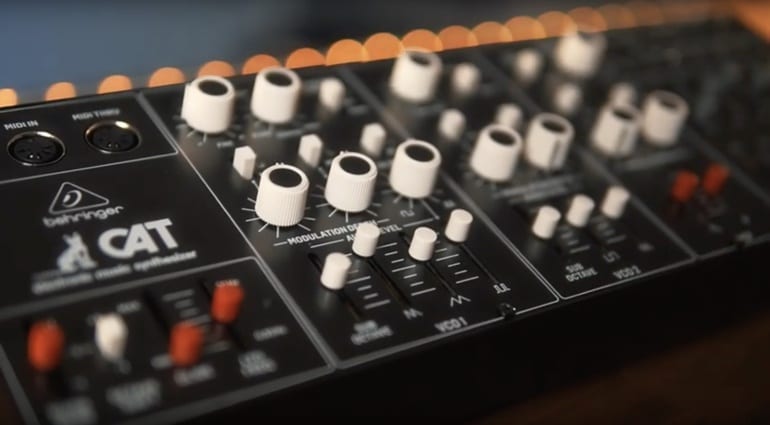 They just had to have the last word in 2019. On the last day of the year, Behringer has unleashed the Cat, a clone of the 1970’s Octave Cat synthesizer. Rumours of a Behringer Cat had been floating around for a while. Now it’s official!

The Octave Cat was sold in the late 1970s as a competitor to the Arp Odyssey (which Behringer has also cloned, of course). It shares many concepts with the Arp classic: Two VCOs, one filter, Sample & Hold, and looping ADSR and AR envelopes or “transient generators”, as they’re called on the Cat. The Cat’s last edition was the duophonic SRM model, which is capable of assigning different notes to each VCO. This is the one which Behringer has now copied.

Unlike the Odyssey, the Cat’s oscillators have mixing stages for blending the waveforms. VCO1 offers sawtooth, triangle, and modulated pulse, while VCO2 has saw and square waves. You can also add a square wave sub octave to each of the two VCOs, another feature which the Odyssey lacks. The oscillators can be synced and modulated from six different sources.

Behringer has omitted the keyboard and turned the Cat into a desktop synth module, much like they’ve done with the K-2 and Model D. They’ve also added CV inputs for both VCOs, VCF cutoff and resonance, and VCA, as well as CV outputs for both envelopes. This means that you’ll have lots of options for combining the Cat with other analogue synths and modular systems. There’s also USB and MIDI in/out, of course.

As of now, we don’t yet know the Cat’s price, nor can we tell you when it will arrive in the shops. But it’s probably safe to assume that the price will be in line with the company’s other synths, probably around the $300 mark.