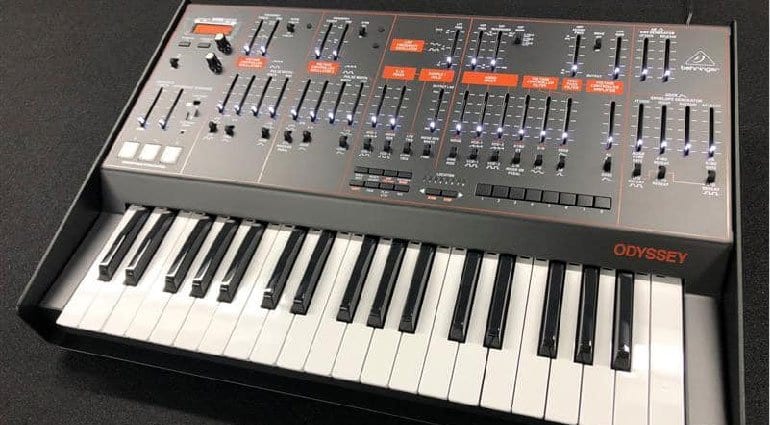 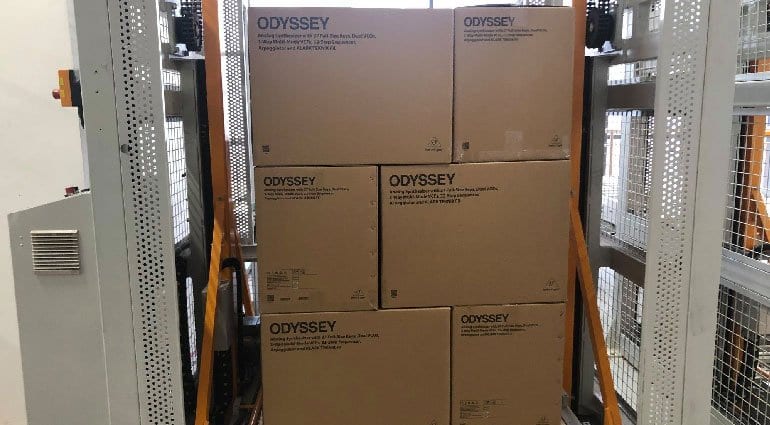 We had our first proper look at Behringer’s take on the classic ARP Odyssey at NAMM in January. And then no news for months until suddenly it’s in a box and on its way to your local store. Now Thomann has air-freighted a bunch to make them available as soon as possible.

Uli apologises on social media for the delay in getting this into production. He says that after sending a few out to their beta testers they came back with valuable suggestions on how they could be improved and they decided they would rather wait and integrate those first. I imagine the same thing has happened to the RD-8.

Maybe this is a good time to check back through the specs to see what the final version has to offer. Behringer’s Odyssey webpage is unexpectedly annoying because it wants you to wade through a bunch of relatively interesting stuff about the evolution of synthesis before actually telling you what’s inside the Odyssey and then fails to list the technical specifications. Hopefully, this will change soon but in the meantime here’s what we know.

Odyssey is an analogue duophonic synthesizer with dual analogue VCOs sporting sawtooth and square/pulse (with PWM) or sine and square when used as an LFO. The filter section has a low pass filter with self-oscillating resonance and a separate high-pass filter. There are three modes taken from all 3 iterations of the original ARP Odyssey, and a drive switch to add a bit of edge. There are 2 envelopes, one AR and one ADSR which can also be looped into LFOs. There’s a pink/white noise generator with sample & hold plus lag processor, portamento and some buttons for pitch and modulation control.

The onboard sequencer can hold up to 32 notes and you can record up to 64 patterns. The arpeggiator has 8 patterns. At the end of the chain is a bank of Klark Teknik effects including reverb, chorus, delay, pitch-shifting and more. If you’ve noticed the little screen on the front panel this is purely for the effects section, it doesn’t save patches or anything.

It looks very much like the original Odyssey and has 35 sliders, 25 switches, 3 pressure-sensitive buttons and full-sized keys. On the back you have MIDI In/Out, USB, expression pedal input. portamento footswitch input, low and high outputs, headphones and an audio input. There’s also CV in/out and Gate in/out.

The current ARP Odyssey reissue with the smaller keys goes for €719 which is the sort of price Behringer laughs at. At NAMM they suggested $499 which weirdly feels expensive for a new Behringer synthesizer (I’m kidding!).