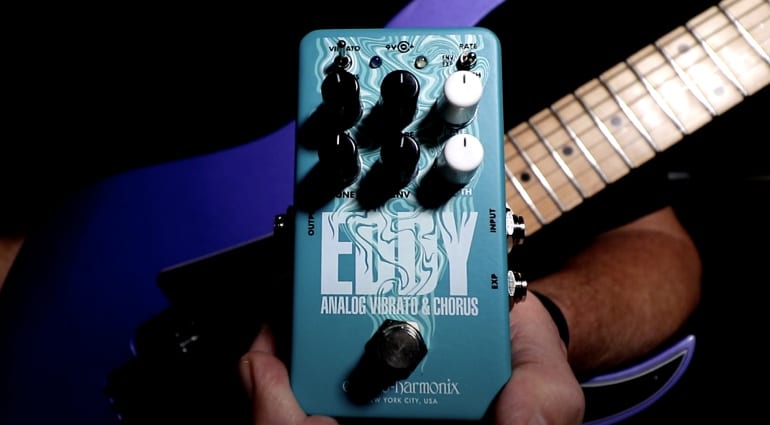 Following yesterday’s announcement of the new Mr Black Analog Chorus/Vibrato Deluxe, Electro-Harmonix has released its own chorus/vibrato pedal, the Eddy, based on a bucket brigade circuit. It looks like we are being spoiled for modulation pedals this week! Let’s take a look at the Eddy in more depth.

The Electro-Harmonix Eddy is a compact pedal with a straightforward control layout that consists of Vol, Shape, Rate, Tone, Env, and Depth knobs, along with a switch for Chorus/Vibrato modes, as well as another for Rate/Depth of the Envelope Expression input. You can then play with the shape knob to adjust the pedal’s LFO. This will make the modulation pulse in a standard sine wave all the way through to an asymmetrical one. Adjusting the rate control will speed up or slow down this wave.

The volume control and tone knob adjust the output and the basic EQ of the effect, as you would expect. You can adjust the envelope knob so that your picking attack affects the rate or depth of the effect. This means that the harder you dig in, the more it affects these parameters, making it nice and expressive. 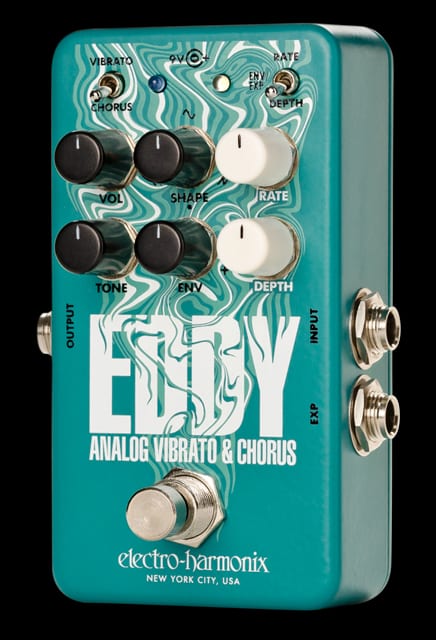 I like that you can also use an external expression pedal to control the rate or depth controls (both the white knobs) on the fly, as this really opens up the control element of the Eddy, making it great for both live performance and studio work. The pedal has a white bypass LED, and another blue LED which pulsates to give you visual feedback on its modulation rate and shape. 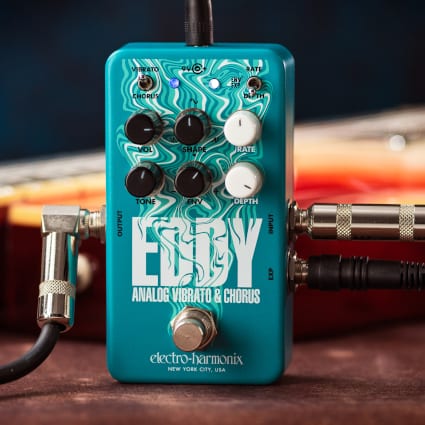 Electro-Harmonix Eddy with external control over Rate and Depth

It doesn’t have a tap tempo, which is where the Mr Black Analog Chorus/Vibrato Deluxe wins out, but having an external footswitch to control the rate and shape is still pretty useful and this pedal is a third of the price of the Mr Black unit. I think if you want a smaller format pedal for modulation then the Eddy wins there. For most of us, it all comes down to the quality of sound and feature set we’re looking for.

As the Eddy has an analogue BBD circuit, it’s able to create nice squishy, chewy organic tones. So if you’re looking for a new modulation pedal with that analogue feel, it’s definitely worth checking out. I always like to have some kind of chorus/vibrato effect on my board, as it is a great way to add interest to guitar lines and can be super versatile. And for the price, the Eddy is a very attractive option for adding these effects to your arsenal. 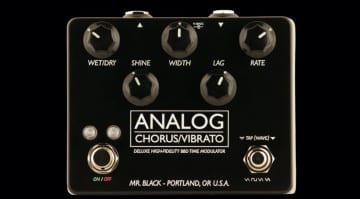 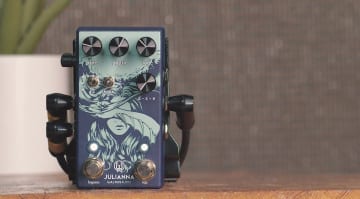