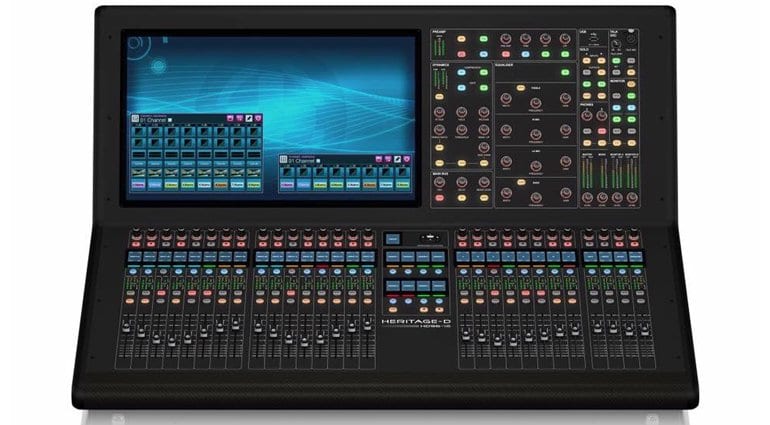 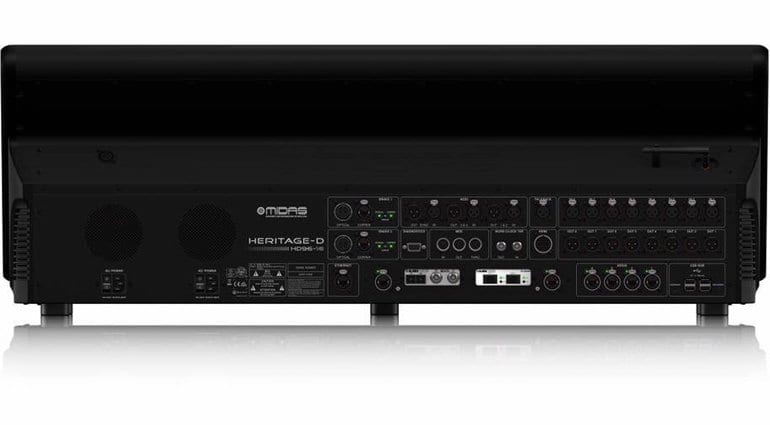 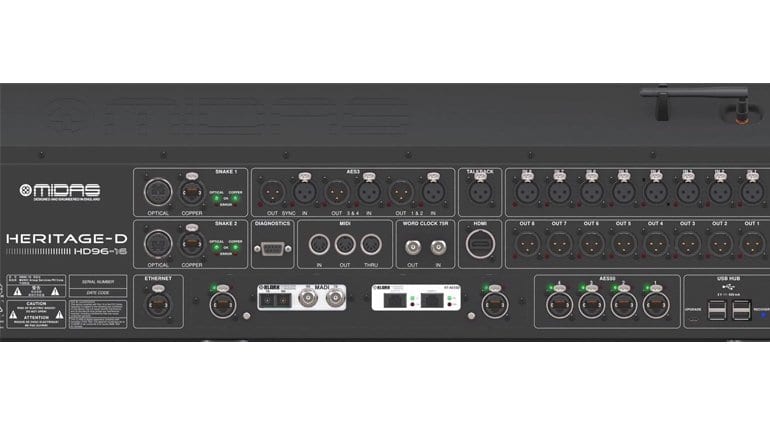 Information is very thin and unofficial, with only some assumptions and predictions building around these leaked photos. Apparently there was a mishap with Midas’ website, which meant a zip file was left on public view containing these images. Midas (Music Group) have now removed the download, but the word is out. Is this a replacement for the X32, M32 or their Pro series?

Well, although an X32 replacement is eagerly awaited, I think it’s clear to see this isn’t it. This is definitely not a Behringer product and doesn’t offer as much local I/O. This is a Midas product and bearing the name ‘Heritage’ can only mean that this will be a serious piece of kit. In fact there are a few features that are reminiscent to both the M32, and Pro1/Pro2 consoles. The shape and similarly styled controls are reminiscent of the M32, whilst the rear panel and large screen are closer to that of a Pro1 or Pro2.

There appears to be only 8 local analogue I/O connections, with the intention for this desk to work with a remote controlled stage box. Earlier this week we heard about Midas re-designing the mic preamps they use in the X32 and M32. I imagine we will see this desk released alongside a new stage box. I wonder if any new stage box will also connect to existing consoles such as the X32.

There is a ‘USB hub’ which will presumably enable easy multi-channel recording applications. This is already available on the X32 and M32, but it’s interesting to see there’s no use of firewire or thunderbolt, at this stage anyway. Of course an Ethernet connection to a PC or Mac should be possible, and that’s the way the industry is heading.

A closer inspection of the rear panel also leads to a few obvious conclusions. Notably, there are dual power supplies (probably) for redundancy, and an antenna which is likely to be for a remote WiFi connection. It would make a lot of sense for all console manufacturers to offer built-in WiFi as standard, instead of us worrying about external routers. Some connectors are a welcome sight also, with a good number of AES channels, Wordclock, MADI and plenty of Audio-over-IP connections. A HDMI port can also be seen, persumably to extend the visibility of the console. This looks like a great product and I can’t wait to learn more about it.

Ive been hunting around for a good quality desk, around the 5000 euro mark and I cant find anything that meets my requirements. I wonder if anyone could help. The closest Ive seen is the Allen and Heath GLD 112 but its a over my budget and does not include the facility to record independent tracks. What i dont understand is that Midas / behringer bring out preamp racks of 16 and 32, a DSP in 1 u rack form but then they don’t bring out a remote console with some basic I/0 that would allow you to have your desk in front of your act without having to use heavy and outdated multicores!!

so an X32 Core pared with the SD8/SD16 and an X-touch (up to four at once) controlling the X32 over Ethernet? (same thing is possible with the M32 Core)

I would love to see a dedicated STUDIO X32 console!

does the author worry about external routers? who the fuck is the target of this article and of this product?

This fake Photoshopped console has been circulating the internets for years.

So has this article – it was published in 2016 and yet remains one of our most popular.