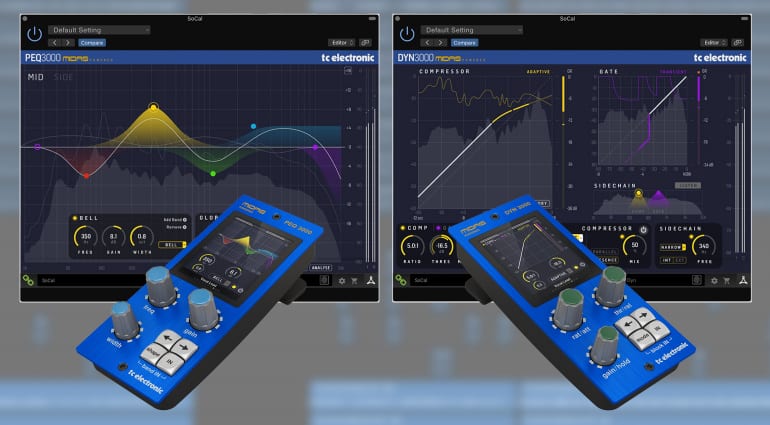 Only a couple of weeks after releasing Master X HD and Brickwall HD, TC Electronic presents two more plug-in/controller combos. The PEQ 3000 and DYN 3000 plug-ins are inspired by the Midas Heritage 3000, a widely used console from the early 2000s. The company claims that they bring the “true tone and feel” of the mixing desk to your DAW. And if you’re a die-hard fan, you can spring for the optional hardware controllers, which put the plug-ins at your fingertips.

Two things. Firstly, the Midas Heritage 3000 is a live console, yet TC Electronic markets the PEQ 3000 and DYN 3000 as mixing and mastering plug-ins for studio use. That doesn’t have to be a bad thing (lots of great live gear sounds good in the studio, too), but it’s something to keep in mind. Secondly, TC Electronic makes it sound like both plug-ins are modeled after the Midas Heritage 3000 console, but as far as I can tell, that particular desk didn’t feature integrated dynamics. This makes me wonder which hardware (if any) the DYN 3000 is really based on. Just some food for thought.

The PEQ 3000 parametric equalizer offers up to 12 bands, as opposed to the 4 bands found on the console. It can operate in mono, stereo, M/S and L/R modes. Each band offers controls for frequency, gain and width (Q). Cut and shelf filters are of course also available, as is a phase EQ option for multi-mic recordings.

DYN 3000 is a compressor and gate plug-in for channel, bus and master use. It offers four compressor types and three gate types. With parallel and upward compression options, an external sidechain input, sidechain filtering and a presence control, DYN 3000 looks like a versatile dynamics plug-in. It operates in mono and stereo.

Both plug-ins can be combined with optional Icon series hardware controllers. This is probably only worth it if you really love these plug-ins and use them all the time, but the controllers do look nice and even feature colour displays. They connect via USB.

The TC Electronic Heritage 3000 plug-ins are now available on the company’s website. EQ 3000 is USD 149, DYN 3000 costs USD 129. You can get free 14-day demo licences, which require an iLok dongle or account. TC Electronic hasn’t announced the prices of the controllers yet.