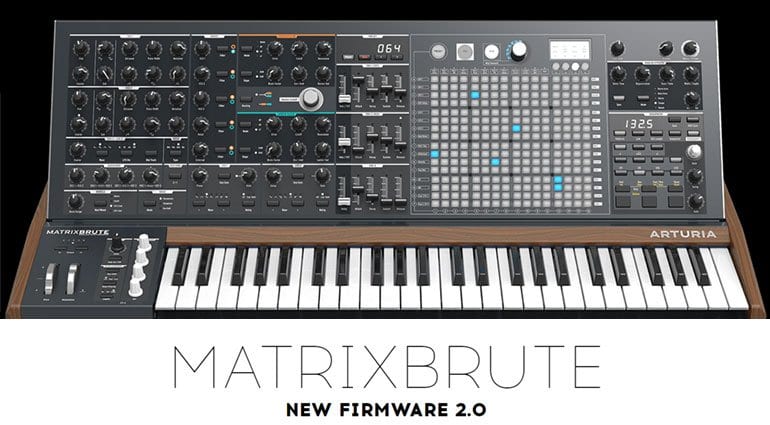 Arturia has released a major update to their flagship synthesizer the MatrixBrute. It tackles many of the requests and niggles from existing users and does nice things to the modulation engine, the sequencer and preset management.

The orignal firmware gave you 4 modulation slots for user defined destinations. The new version takes this up to 4 pages of 4 modulation slots giving a total of 16 destinations alongside the 12 fixed destinations. It’s almost as easy as holding a button and turning the knob you want to modulate – almost! Staying with modulation you can now draw your own LFO waveforms using the 16×16 grid. It’s a bit like creating a 4-bit version of a wave. You can specify if you want parts of the the wave to be stepped or smooth.

On the sequencer side they make better use of the matrix and step-recording. They’ve made it much easier to edit the notes in step mode, add accents and automation, tie notes and rotate whole sequences.

Elsewhere there’s a new preset compare mode where you can compare two versions of a preset that you’ve made and decide which to keep or to keep both. You can also now access all the system parameters that were previously only available via a computer connection.

In addition they squashed a load of bugs and added 64 new presets for you to play with that showcase the new features.

I’m always pleased when an update appears for a complex synthesizer. It shows that the company is listening and is still investing in its existing user-base and product line. Great stuff!