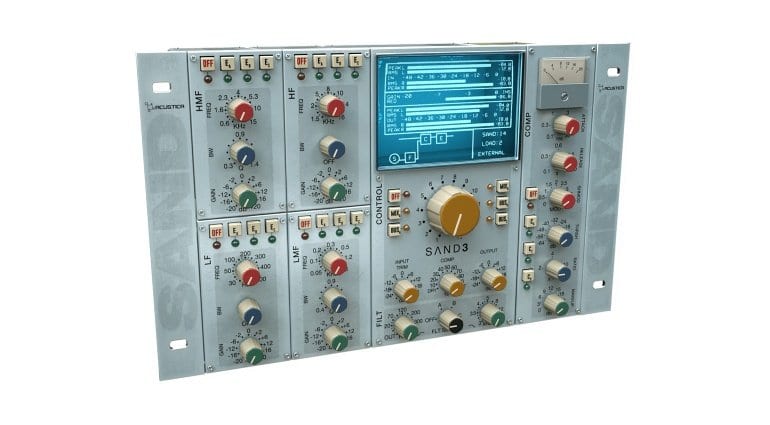 Acustica Audio remains one of the most productive plug-in developers out there. We’ve seen a string of new releases this year already, including Coral 2, Ultramarine 4, Aquamarine 4 and Amber 3. They’ve also recently renewed their console emulations with Honey 3 and Cola.

Sand3 emulates EQs, compressors and a preamp from several iconic British consoles – it’s no secret that we’re talking SSL. Like most Acustica plug-ins, it utilizes the company’s effects sampling technology. All in all, Sand3 now contains six plug-ins, two more than the previous version:

According to the manual, the new +E and +G equalizers are based on “homebrew” EQs built by Soundrops (SteDal). The +E EQ is derived from a 4000 E console, while the +G EQ is based on a console introduced in 1993, which makes the SL 8000 GB a likely candidate.

Sand3 also includes new metering options for the input and output stages. With VU, Peak, True Peak, LUFS, K12 and K14 meters, you have many options to get the levels just right.

Sand3 runs on Acustica’s new Core 14 engine. According to the developers, the main improvement over previous engines is AI deep learning technology. Acustica says that its AI tech predicts the settings that a professional engineer would make. I don’t know what to think of this right now, but it sure sounds fancy! They’ve teamed up with seven engineers to “feed SAND3’s AI with some good knowledge”. The result is a total of eight AI presets which you can use in your productions. It’ll be interesting to see how this works.

Acustica Audio Sand3 runs on Windows 7 and up (VST, AAX, 64 bit only) and Mac OS X 10.8 and up (VST, AAX, AU). The installation is handled by Acustica’s Aquarius application, which also lets you download a trial version.

Acustica usually has attractive introductory prices, and in the case of Sand3, it’s especially nice. For the first four weeks, the plug-in suite costs only EUR 59. That’s 70% off the regular price of EUR 199.