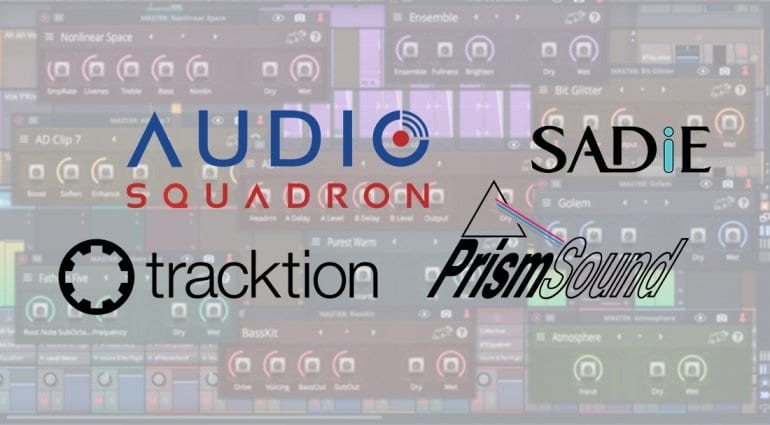 Tracktion has announced that it is joining forces with Prism Sound and Sadie to form a new company: Audio Squadron. The firm says that it wants to be a “dynamic new player in the pro audio market”. Does this mean that some exciting new products could be around the corner?

Tracktion has come a long way with the Waveform DAW, which has gained a lot of popularity ever since the company made Tracktion 7 completely free. Smart move! Meanwhile, Waveform has progressed to version 10. Does the new joint-venture mean that we could see it evolve into an integrated software / hardware production environment?

UK-based Prism Sound is known for high-end audio interfaces and D/A converters. The firm also has a test and measuring equipment branch, which will remain with Prism Media Products Ltd. The pro audio division will be integrated into Audio Squadron. Sadie brings its audio editing software Sadie 6 to the table, as well as its digital recorders and studio workstations.

What’s around the corner?

All of this considered, it seems that Audio Squadron will have the potential to create some interesting products. Nothing has been announced yet, but I think it’s a real possibility that we might see a line of audio interfaces specifically designed for Tracktion Waveform, sort of like what Native Instruments is doing with its Komplete Audio line. Until now, Prism Sound interfaces were much too expensive for the average home recordist. But I assume that they’ll be able to come up with something more affordable, too.

Or will Tracktion / Prism Sound / Sadie evolve into an integrated software / hardware production suite like a Pro Tools HDX system? The integration of Sadie means that the next version of Tracktion Waveform, or whatever it will be called then, might have advanced audio editing capabilities. Are they planning to create an alternative to Pro Tools for high-end users?

As of now, all of this is pure speculation. But it seems like Audio Squadron will have a lot of expertise under its umbrella, which can only be a good thing.

One response to “Tracktion teams up with Prism Sound, Sadie to form Audio Squadron”