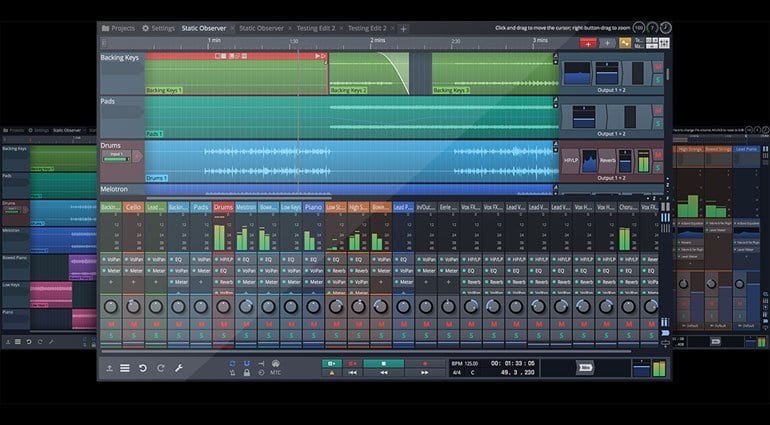 Tracktion Corporation have released the new version of their “T” DAW and changed the name to Waveform. We first caught a glimpse of it at NAMM earlier in the year, but now we have the full skinny.

Tracktion has a lot going for it. It’s been around a long time and was created to give a fresh approach to the standard DAW interface. Recently its development has come on apace and it’s starting to stand out from the crowd in terms of its creative approach to music production. But there were some key things missing. Most prominently there was no console style mixer. You could certainly mix, but the lack of a familiar fader style control surface really hindered Tracktion’s wider appeal.

Well, not any more. In their biggest upgrade yet Tracktion have brought their DAW into the future, stuck in an awesome looking mixer console and are bravely heading onto platforms that few others bother about. The one thing that didn’t need upgrading was the name, but they changed that anyway into Waveform, which, for me, just seems a little generic. But let’s go with it.

It’s all about having a laser-like focus on the music production. Tracktion like to champion their “creative and inspirational workflow” while avoiding things that make it unnecessarily complicated. There is a sense of fun and ease about using Tracktion/Waveform generally, but perhaps the mixer was something that became more necessary than it was complex. But let’s not get hung up on, it looks like they’ve done a great job of sorting that one out.

A lot of the creativity happens in the clips in the arrange page. There’s like this whole engine attached to each audio or MIDI element where lots of exciting things can happen. On the MIDI side there’s step sequencing, pattern creation, randomisation and all sorts of note processing goodies. On the audio side you can mess with loops and timing, stack up a whole ton of effects, slice, dice and mess it about. At no point do you have to go to another window or another editor, it’s all on the page.

Within the included sounds is a new sampling synthesizer called Collective. It has 4 oscillators, a filtering section, effects and arpeggiator. The editing flavour is very much like their Biotek instrument, with clear, well laid out pages of controls and a huge amount of depth.

Waveform is available on Windows, MacOS and Linux and supports all the usual plug-in formats. But they pushed it a bit further. The efficiency and footprint of the software allows it to run on the Raspberry Pi, which is a pretty amazing achievement. Although I’m not exactly feeling who that is aimed at.

All about the music

Ultimately Waveform is all about music production. It provides a range of tools and editing possibilities that you don’t find on any other DAW. It works differently, you have to adapt a bit to discover the ease of the workflow. But once you do you’ll find it a very creative and inspirational place for making music. If you’ve never been tempted by Tracktion before then I’d recommend giving Waveform a go.

Waveform is available now from $99 up to $200 with all the possible expansions and Biotek thrown in. More information on the Tracktion Corporation website.