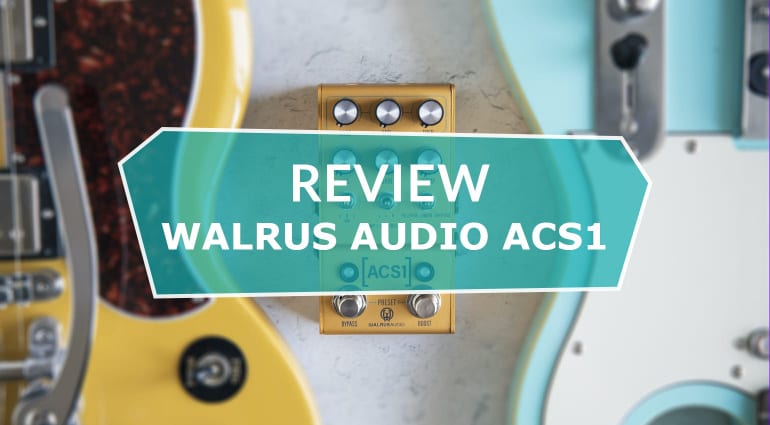 Earlier this year Walrus Audio launched its amp-in-a-pedal, the MAKO Series ACS1 amp and cab simulator. Well… three amps in a pedal, to be clear. The company was kind enough to lend us its latest MAKO Series release for a test run. Did it meet our high expectations? Mostly…

But one thing at a time. The Walrus Audio ACS1 features three amp models, with matching cabs. The three amp simulations on offer here are: Fullerton, which is based on the Fender Deluxe Reverb, London, based on the 1962 Marshall Bluesbreaker, and Dartford, based on a ‘60s VOX AC30. You also get a total of six cabinet IRs that can be selected with the pedal. There are three matching cabs for the three amps based on the 1×12 Fender Deluxe Reverb, a Marshall 4×12 and VOX AC30 Greenbacks. But holding down the Bypass footswitch lets you access three more cab IRs based on a Fender Super Reverb, a Two Rock, and Vox Bluebacks.

The pedal has stereo ins and outs, a headphone out, MIDI in and thru, and a USB port for downloading IRs off Walrus Audio’s website. 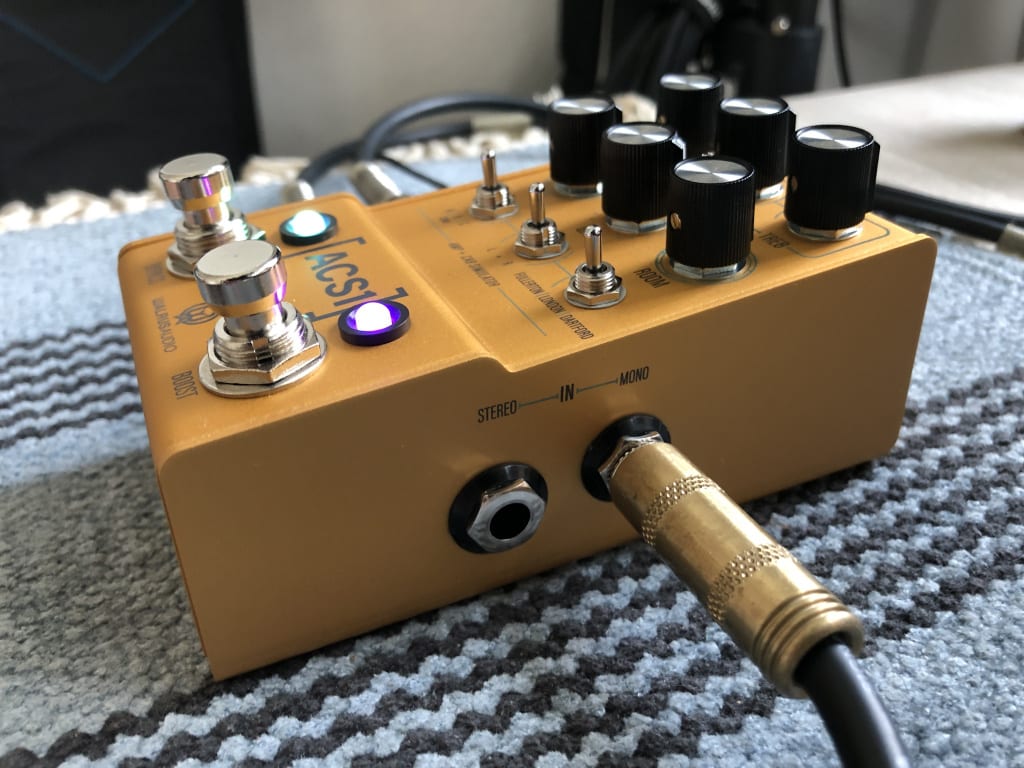 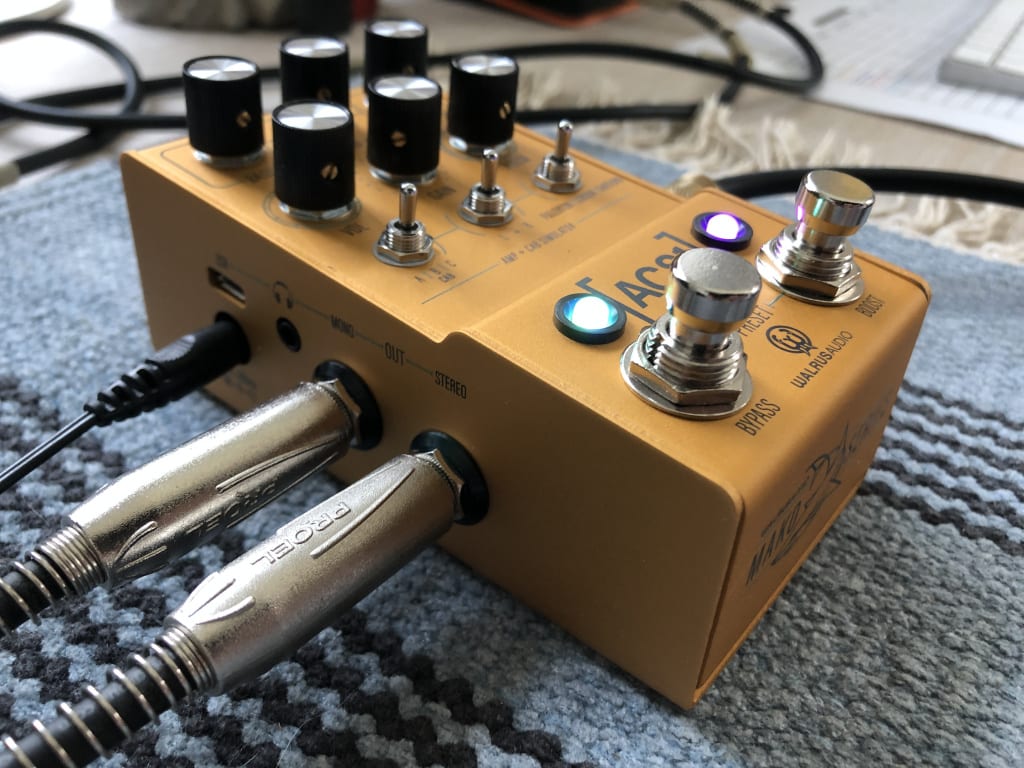 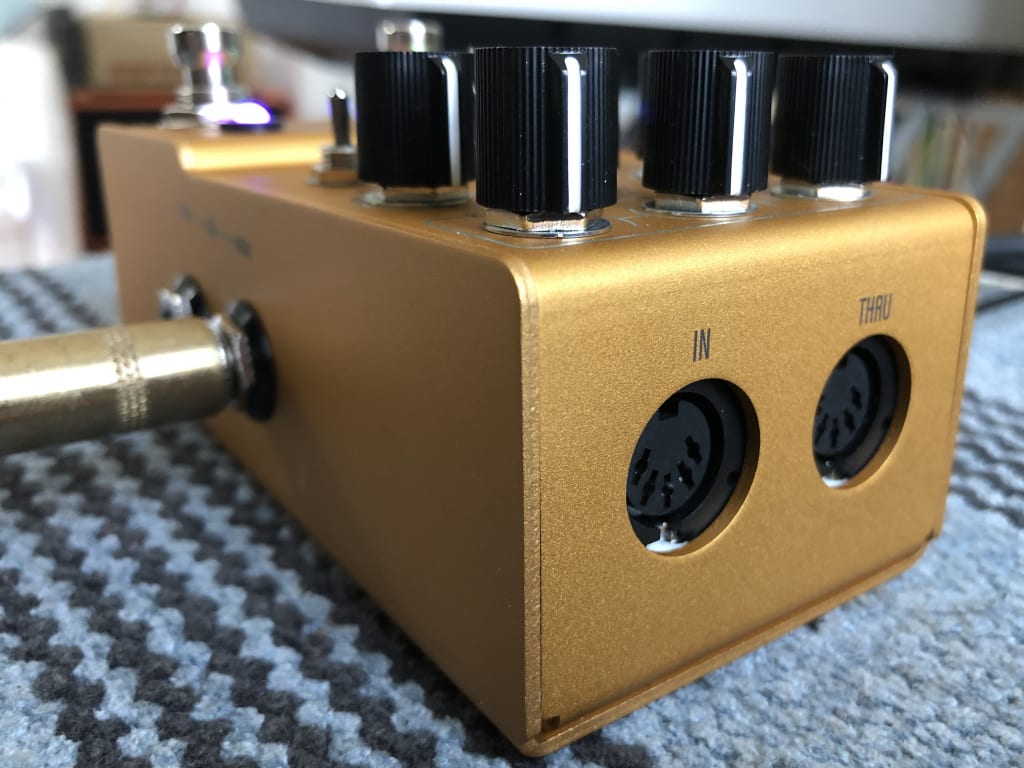 The pedal comes in a robust metal housing in a fetching gold finish. It has a pretty simple layout of 6 knobs, three mini-toggles, and two footswitches. The top row has controls for Bass, Mid and Treble, and the bottom row for Vol, Gain and Room. The EQ section and the Vol and Gain knobs are self-explanatory. The Room knob simulates the room size. When turned all the way down, it makes the signal bone dry; turn it up, and it adds a bit of air to the tone. The ACS1 is quite idiot-proof.

The three toggle switches are labelled A/B/C, L+R, and Fullerton/London/Dartford. The A/B/C toggle selects the cab IRs, while the Fullerton/London/Dartford selects the amp model. The L+R toggle lets you choose which side of the stereo spectrum you want the simulation sent to. Then you have the two footswitches, one for Bypass, and the other for Boost. 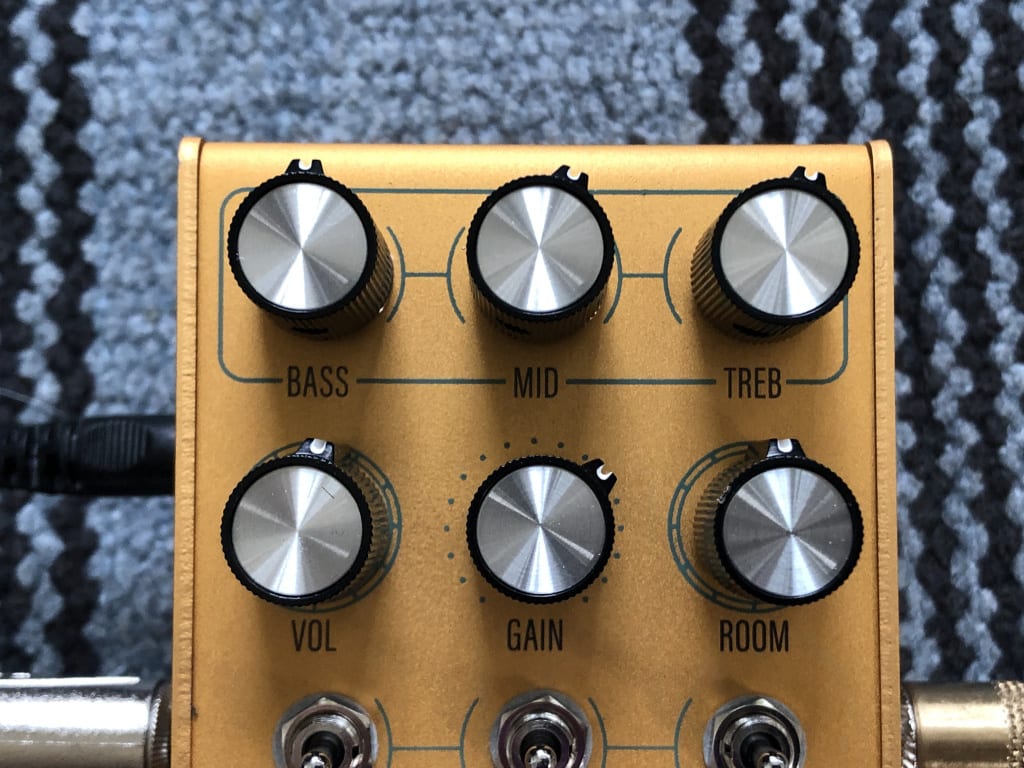 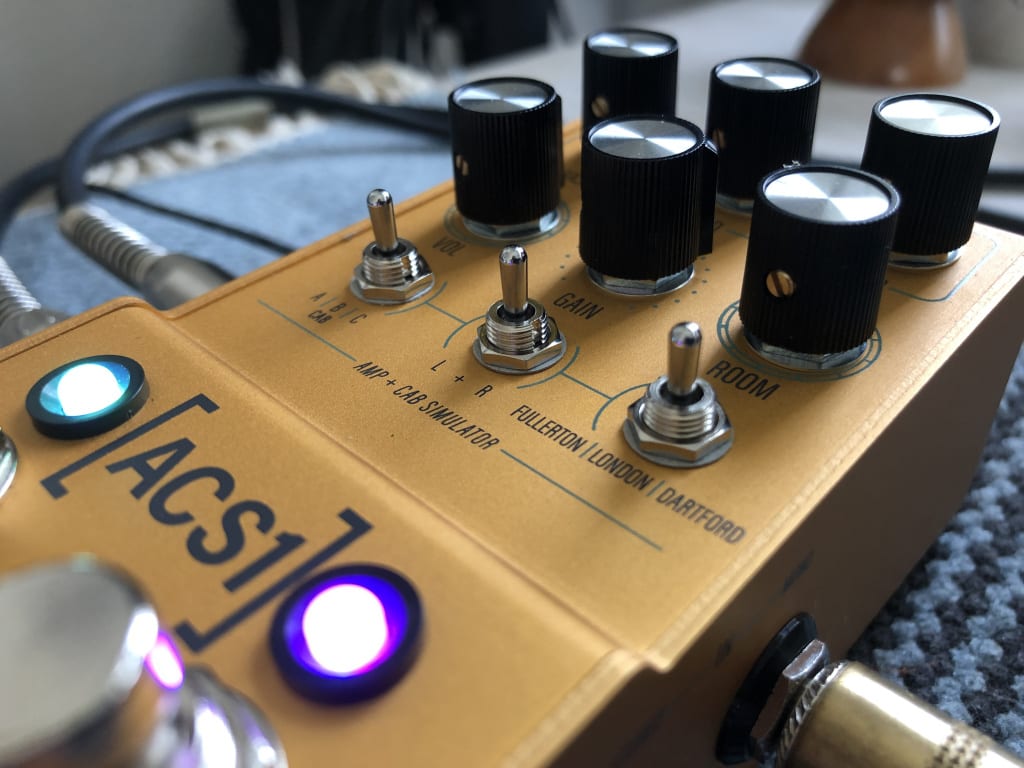 Since the purpose of the pedal is to emulate conventional amps, plugging them into an amplifier seemed redundant. And why would anyone want to do that, when you have stereo outputs! So the pedal was plugged straight into the interface and out through the monitors.

It’s important to note that the pedal doesn’t run on batteries, and Walrus Audio doesn’t recommend daisy-chain power supplies. It also doesn’t come with its own power supply, so you will need an isolated power supply to run this box. Any 9 Volt DC center-negative power supply with a minimum of 300 mA will do. As soon as you give the unit juice, it will power up.

The first thing I did was turn all the knobs to the noon position and select the London amp and its matching B cab. And then, turned the Gain knob all the way up. It’s based on a Bluesbreaker after all! Obviously, the first thing to do is to belt out All Your Love. Nope. I turned all the knobs up. Still not quite there. All I can say is, don’t expect that ‘Bluesbreakers with Eric Clapton’ tone out of the box.

The pedal will get you a nice breakup, and it certainly has the girth and power one associates with Marshalls, but don’t expect screaming high-gain tones. I’ll admit, I was a bit disappointed initially. But I also appreciate the approach Walrus Audio has taken here. I realise that technology has come a long way, and guitar amplification has squarely entered the realm of the digital. Even so, replication of high-gain amps usually tends to leave me wanting something a bit… more. So if you like to cook the tubes on your amp for gain, you might be disappointed here. And if you want high-gain, you’ll need to employ your pedalboard.

So once again, but this time with the TS9 engaged… Hallelujah! 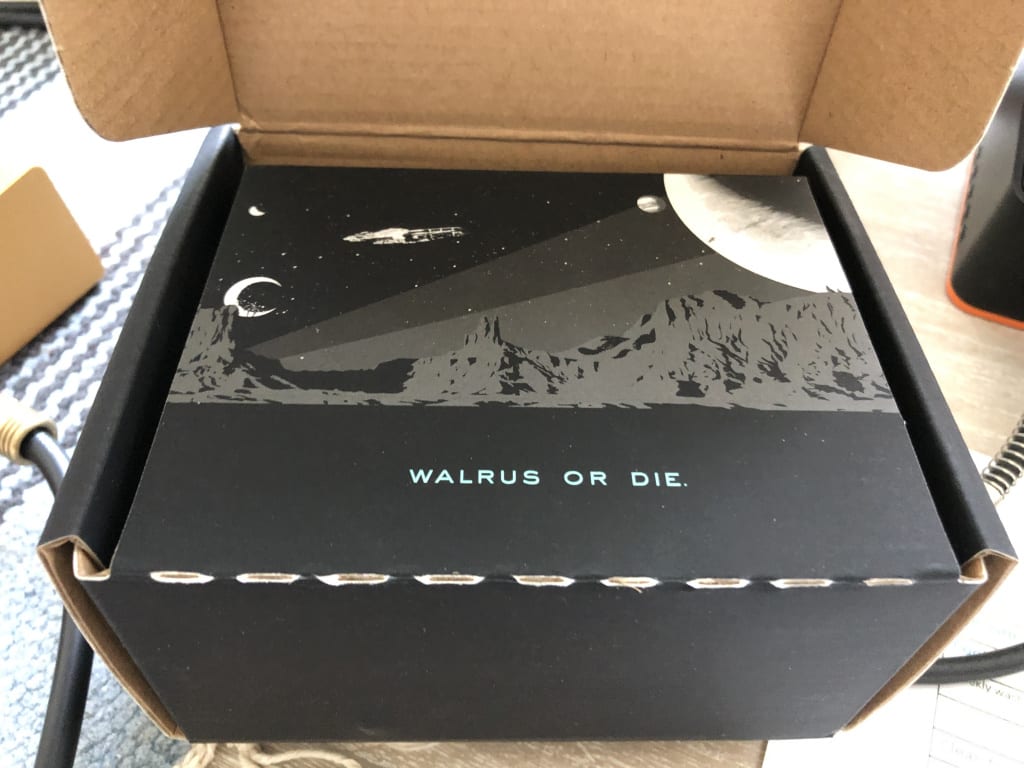 Is that a threat or an instruction?

Once my Bluesbreaker fetish was satiated, I tried out the Fullerton mode, or the Fender Deluxe Reverb simulation with its matching cab on the A position. Instant Fender chime-iness. But right after the 4×12 Marshall mode, it felt a little wimpy. This is easily rectified by employing the ‘Back Cabs’, as the ACS1 manual calls them. These can be accessed by holding the Bypass footswitch down while setting the A/B/C toggle. The amp matched with the Fender Super Reverb cab sounded much fatter to my ears. The Dartford mode, or VOX AC30 model, with its matched cab sounded great too.

Of course, using the EQ and Gain, you can dial in the amp to an approximation that sounds closest to the original as you’ve heard. Bear in mind though, that the Room control is not really a reverb, so don’t expect classic Fender spring reverbs here. It’ll just give your sound a bit of, well, room and air. But turning it all the way up won’t wash your signal. Each amp model can then further be matched with any of the six cabs. So you can run the Fender through a Two Rock, or the Marshall through the Greenbacks (very nice!) or the Vox through the Fender Deluxe, and so on. 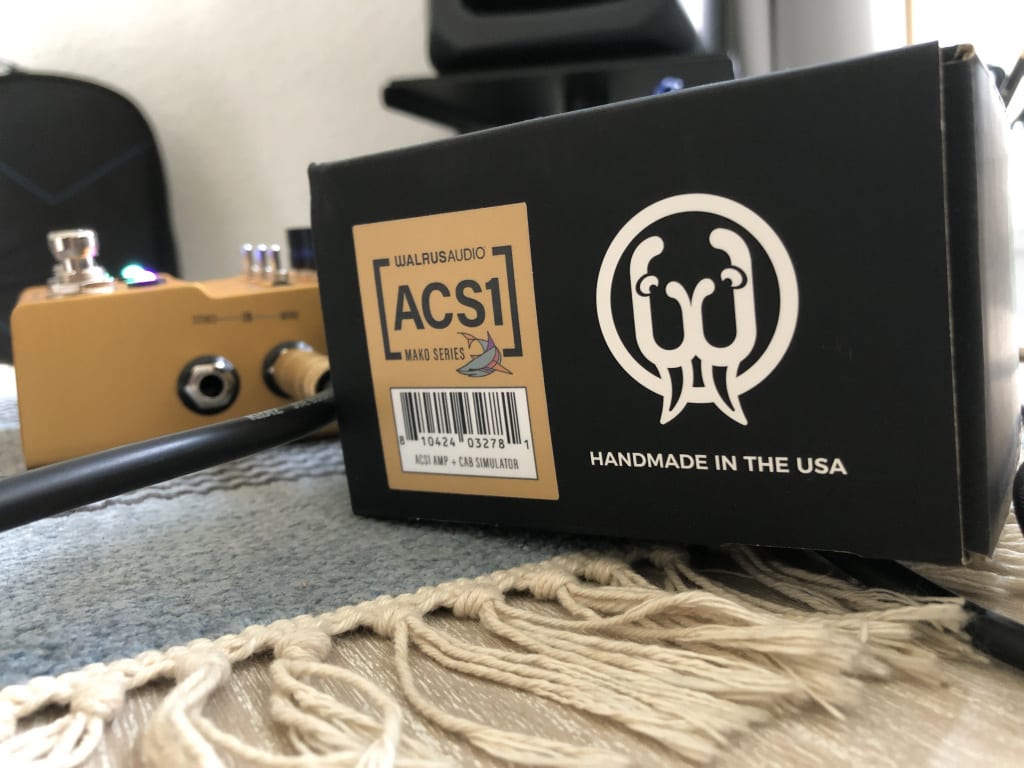 Handmade in the USA

The Boost footswitch basically takes your Volume and Gain knobs to the Spinal Tap 11. It’s sort of like another preset. When engaged, you can set the Gain and Volume controls to where you would like your Boost setting to be. Again, don’t expect too much gain though.

And now on to the fun part. You can split your signal into stereo and have a different amp sim running in each channel! Hours of fun was to be had! You can mix and match the amps and cabs and have them coming in either side of the stereo spectrum. You can have a dry, edge-of-breakup Marshall tone on one side, and a clean chime-y Fender tone on the other. Or… well, listing all the possible combinations and settings would take forever. But you get the idea. 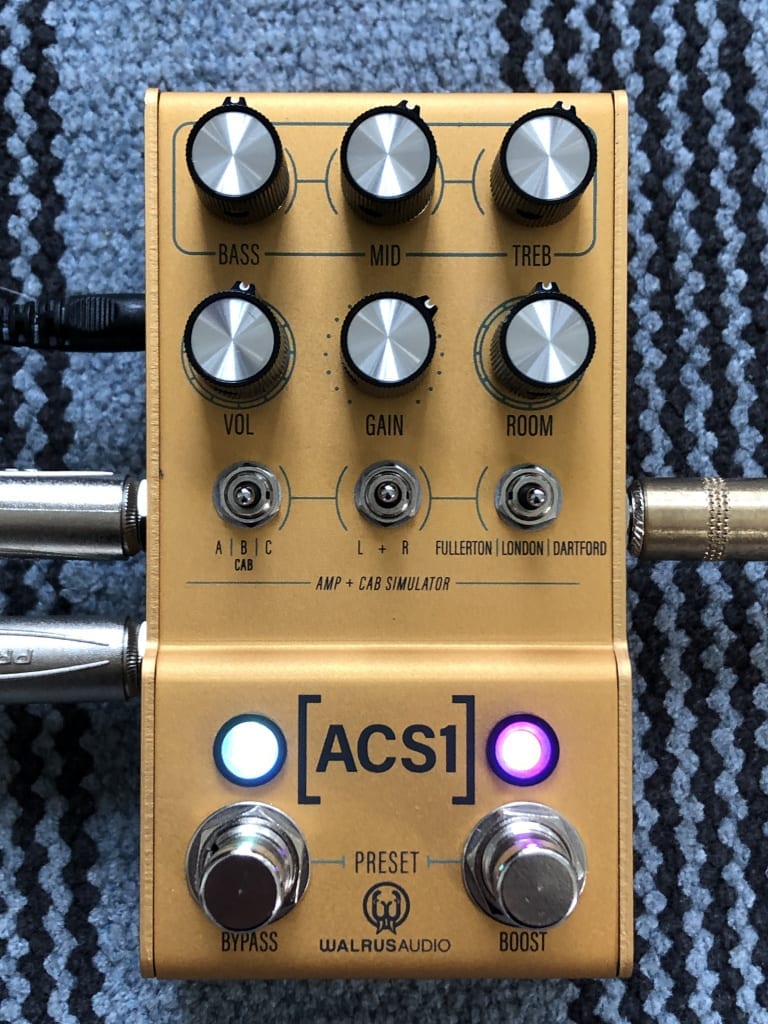 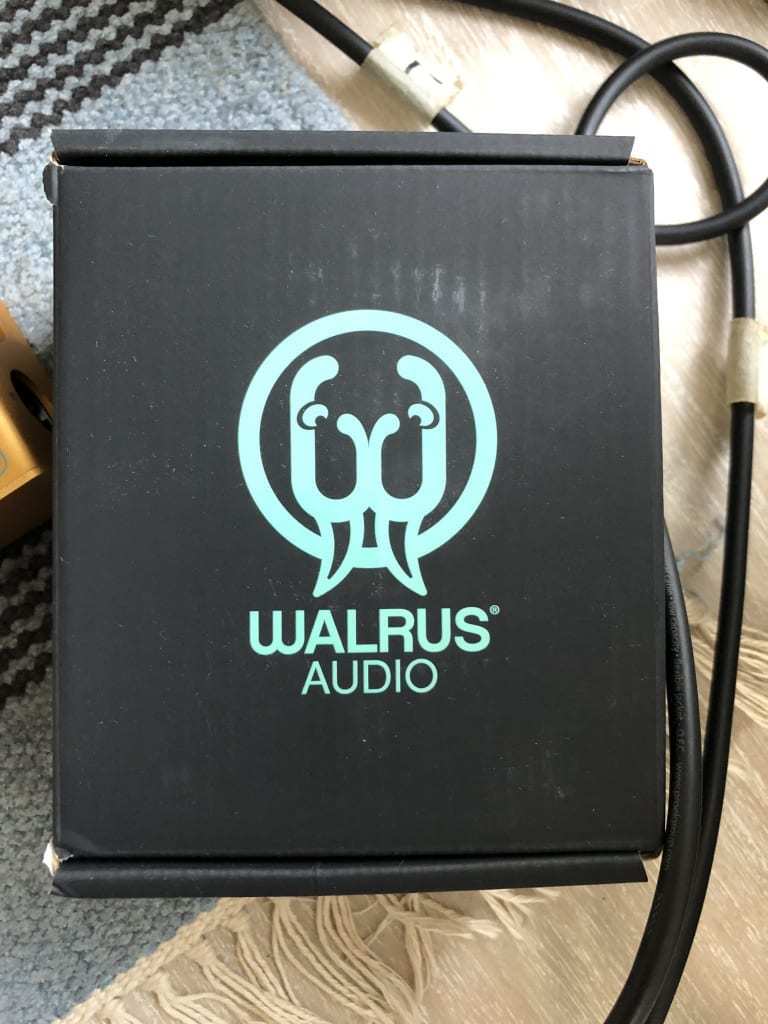 The box it came in

Now here’s the thing: if you expect this to replace your amp, you’ll probably be disappointed. It’s not going to sound like either of the three amps, were you standing in front of the originals and playing them. But I don’t think it’s meant to replace your amps. The ACS1, to me, is more of a production tool. It sounds like what an amp, that’s been mic’d up in a good recording space, would sound like through studio monitors. Henning on his YouTube channel Eytschpi42 does a pretty good comparison. He has the gear, and space, to test the ACS1 against. And it gets pretty close. I’ve added the video below, if you’re curious.

But if you’re planning on ditching your amp, and travelling lighter to your next gig (whenever that may be), or you simply want more options, the ACS1 will do the job. If you want high-gain though, it’s probably better to bring along the rest of your pedals. Which, if you’re sticking this on your pedalboard, probably won’t be an issue.

I loved the pedal’s stereo capabilities. I think it offers a lot of potential when coming up with ideas. It’s a great tool to practice on as well, thanks to its headphone output. But where it really shines, I think, is in the home studio. If you don’t have a big space to record, but still want those classic tones, the Walrus Audio ACS1 is definitely a good bet. 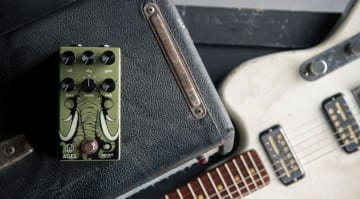 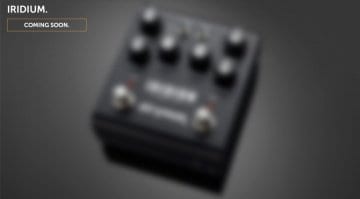 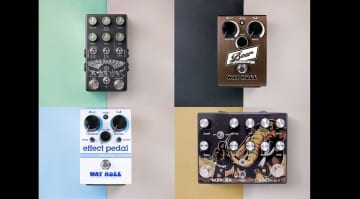