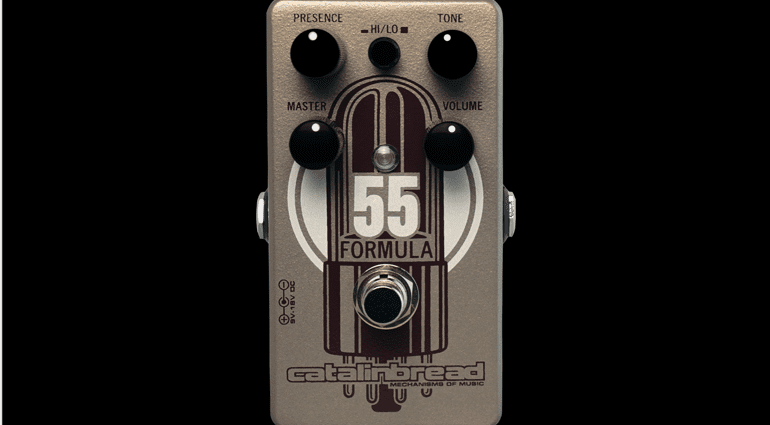 Catalinbread has just added the Formula No. 55 to their range of Foundation Overdrive drive effects pedals. It seeks to squeeze that 1950s vintage tweed 100-watt amp tone into a small, neat, modern effects pedal, just with lots of cool vintage drive.

Catalinbread say they have tried to get the sound of ’50s Fender 5E3 Deluxe 100 watt tweed amps from the later part of that decade, which famed for their classic rock tones. Leo wanted players to mind that volume “as it could cause distortion if pushed”, so what did our grandparents do? Hell yes, they cranked those old amps till their ears bled and Rock ‘n’ Roll was born!

Catalinbread are no strangers to making absolutely fantastic ‘amp-in-a-box’-style drive pedals, and I think they have a real knack for capturing classic vintage amplifiers and squeezing them into effects pedals. Last year’s revised SFT was a prime example of what they can do. I’m expecting the new Formula No. 55 to be good, and it might become a popular pedal. After all, many great guitar tones are based on the old 5E3 amps.

The Formula No.55 has a simple control layout of Master, Presence, Tone and Volume knobs, as well as a Hi/Lo switch. The switch toggles between more vintage tweed tones and those higher gain, more distorted tones that Leo warned our grandparents about!

It looks simple enough to me, which I think is a good sign for an overdrive pedal. No audio demos are as yet available, so we will have to wait until the NAMM Show to hear some demos. I’ve got my hopes high that this is going to be good, though!

You should also check the video below as it appears they have a lot more new goodies in store for us at NAMM. If you’re going to Anaheim for the show, head over to Booth 3196 to see what else they release.

The new Catalinbread Formula No.55 will be available to buy from the end of January.

Full details are available on the Catalinbread site