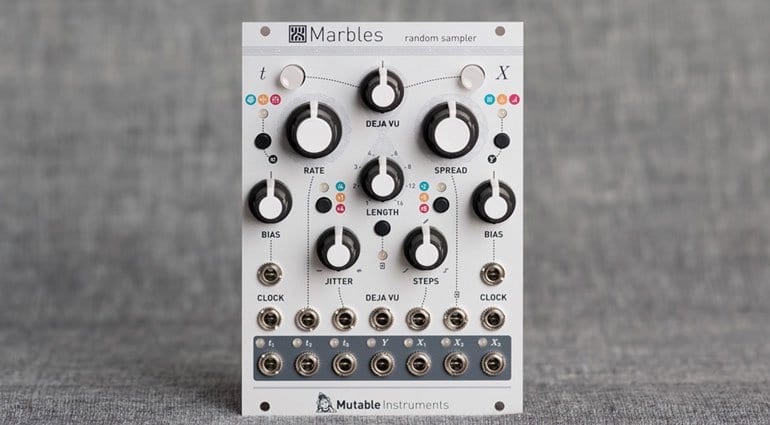 After a good bit of speculation and light teasing Mutable Instruments have given us a nice new module. It’s not a remake or an evolved version of something they discontinued this is something new, something random but it’s important to note that Marbles is not a sampler.

What’s in a name?

I’m sorry to start off talking about a fabulous new module on a bit of a downer but what’s with the “Random Sampler” tagline? I guess it means Marbles has a sample of different sorts of randomness like you’d have a carpet sampler. But in this game the word “sampler” is very much defined and so all this does is throw unnecessary fog and confusion over what this module actually does. So it’s not a sampler? No, it’s a marvellous module of CV and gate randomness. Let’s move on.

Right, Marbles is a source of random gates and voltages that can be created and output in shed loads of different ways. There are two main things going on. On the left, there’s “T” which is the random gate generator section and “X” which generates random CV. But there’s more stuff happening without those realms of randomness.

Marbles can lock to an internal or external clock, but it likes to mess with it a bit. The clock is “perturbed” by a process that simulates the crap timing of musicians. It ranges from perfection to complete chaos. From this point of instability T generates 2 channels of random gates taken from coin toss, random ratcheting or random drum patterns.

X generates 3 channels of random CV clocked to the output of T. You have tons of control over how this randomness is realised through the outputs. There’s a programmable quantizer with 6 scales that you program by playing the notes in. The voltages can be concentrated or spread out, quantized or non-quantized, smooth or steppy, centred or biased.

And then there’s the Deja Vu knob which works to increase the likelihood of a pattern repeating. It works in a similar way to the knob on the Turing Machine.

As a source of randomness spread across 7 individual outputs Marbles is unmatched in its comprehensiveness. There are all sorts of things going on here that could randomly revitalise your Eurorack. Despite the ill-judged name Marbles is an absolute winner and YouTube will soon be filling up with videos of extraordinary uses.