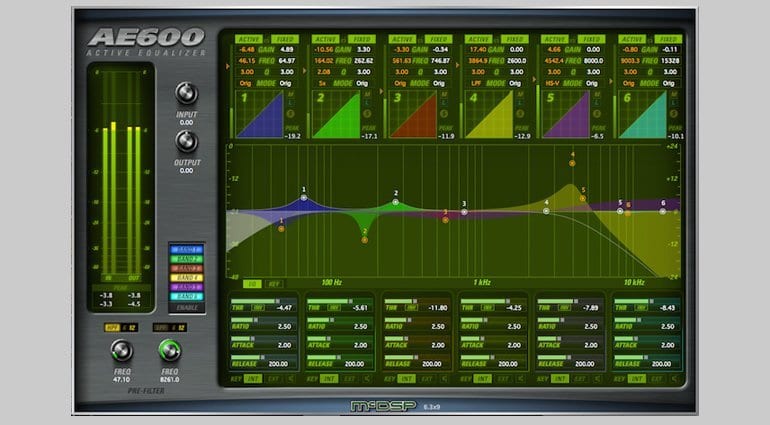 McDSP are well-known for their ML4000, which is one of the most powerful multi-band dynamic processors available. I recently reported on the release of the ML8000, which offers 8-bands of dynamic processing with their highly-respected limiter technology. This AE600 is an update to the AE400 adding even more control, which I’m sure will be hugely powerful and very effective. In the wrong hands though, this could be like asking your mum to drive a Ferrari.

The AE600 is in multi-band dynamics processor where each EQ band also features dynamic parameters that react to the incoming signal. It can be used on individual elements in a mix, across mix busses, or as a mastering tool on stereo mixes. General tone-shaping can be achieved through to very intricate EQ work, all with dynamic control. These can prove really useful and effective tools, the closest and most common comparison is iZotope’s Ozone Dynamic EQ module.

This new version adds more EQ curves and the ability to un-link fixed and active EQ bands. This effectively leaves us with a 12-band EQ! While I love having a large amount of control from a plug-in, I’ve actually found the number of occasions I use a dynamic/active EQ reasonably rare. This is clearly a professional tool and can be used to great effect for ‘fixing’ issues or generating some interesting sounds.

However, tools like this might encourage the less experienced to focus on the wrong aspects of working with audio. “All the gear and no idea” comes to mind. Surprisingly for a well-respected company such as McDSP, I believe my point is proved in the video below. In particular, listen to the lead vocal example. However effective the AE600 is at the de-essing aspect of the process, that isn’t the best that vocal could have sounded. Too much use of the intricate abilities of such a plug-in leaves quite an un-natural result which certainly sounds ‘processed’. This isn’t a reflection on the plug-in (which looks great BTW!), but how tools like this can be inappropriately used.

I wonder what McDSP will do next? I would have preferred to see a new plug-in that combines all the best parts of ML4000, ML8000 and the AE400/600 in one plug-in. This could be really useful and unique. A future release perhaps? It should come with a warning though, ‘for professional use only, seek advice before committing’.

The AE600 is available now and in all the usual McDSP formats. The Native version is 149 USD and Pro Tools HD users can opt for the DSP version at 249 USD. I wish more plug-in manufacturers still offered a separate HD version of their plug-ins. Any current owners of version 6 of the AE400, can upgrade for a limited time only of 49 USD. For more information, head over to the AE600 webpage on McDSP’s site.

Here is the afore mentioned video from the McDSPTV channel on YouTube. The video offers a full demo and tutorial of the AE600: