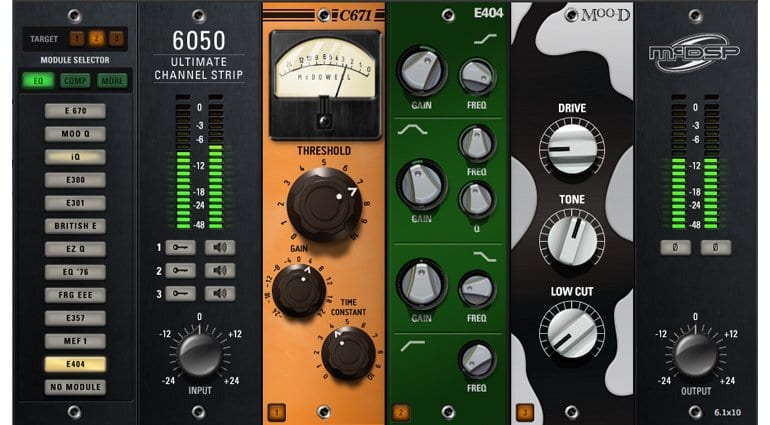 Earlier this year, McDSP announced a complete channel strip plugin solution which I reported on here. Within their latest v6.2 update, the 6050 ‘Ultimate’ channel strip plugin is finally here. However, as suspected this is a significant release from McDSP which isn’t included in their ‘everything’ bundle. There are a couple of introductory offers in place for existing customers, but you’ll need to get in there soon before these offers end.

The 6050 Ultimate channel strip plugin is a modular style plugin with a variety of effects. Many manufacturers are offering plugins in this form now, which offer flexible drag & drop, and fast auditioning functions. It’s a very efficient way to work within the plugin domain, and hopefully keeps CPU management under control. McDSP have offered modular style plugins before with the 6020 Ultimate EQ and 6030 Ultimate Compressor plugins, but the 6050 takes it one step further. There are 28 different effects available including EQ’s and dynamics as well as saturation tools.

This plugin is sure to be a hit, and I’m confident it will sound great. McDSP have been building excellent plugins for years now and have an especially good reputation for their dynamics processors. The big question however is: what will it cost me? For new customers, the HD version will cost 329 USD and the Native version 229 USD. For existing customers of the v6 Everything Pack, or the 6020 and 6030 plugins, there is a limited time introductory offer of 199 USD for the HD version and 99 USD for the Native version. It’s not clear how long this offer will last, but I’m surprised there’s any time limit on it at all to be honest.

Besides the release of the 6050 channel strip, the v6.2 update also brings some key improvements to all McDSP plugins. Most notably, there is improved support the El Captain 10.11 operating system for Mac, and improved VENUE OS support for the S3L and S6L digital consoles. This is great to see and in-keeping with McDSP’s continued effort in supporting many platforms.

Here’s a short YouTube video from the McDSPTV channel: