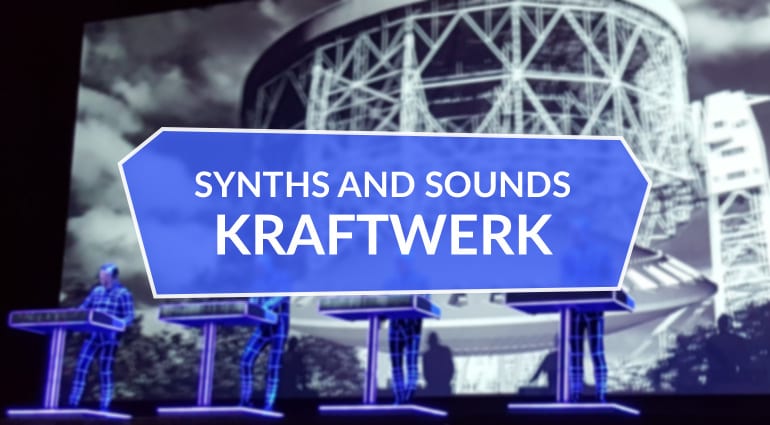 Few bands have had a bigger impact on electronic music than Kraftwerk. Even almost 50 years later, “Autobahn”, “Trans Europa Express” and “Computerwelt” are considered musical milestones and continue to inspire musicians across the world. Which synthesizers and other gear did Kraftwerk use, and which alternatives are there today? We’ve compiled a list.

Analog synthesizers dominated the band’s early records. Did the Moog Minimoog become the most famous synth of all times because it was used by Kraftwerk? We can only guess, but it probably didn’t hurt. The Minimoog was a fixed staple in the band’s arsenal throughout their career and is even pictured on the back of the album “Ralf und Florian” – the first one on which Kraftwerk used synths.

Because the Minimoog is such an icon, there are now quite a few hardware and software emulations available. Moog used to make its own replica, but discontinued it four years ago. A much cheaper option is the Behringer Model D or its polyphonic cousin Poly D.

Over the years, Kraftwerk replaced the Minimoog with a variety of other hardware and software synths, especially on stage. The band has used the Creamware Minimax ASB and the Studio Electronics SE-1, which came out in the early 1990s. The updated version SE-1X is being sold again, and Studio Electronics has just announced the SE-3X, which adds a 3-voice paraphonic mode and additional filters, among other things. And of course, there’s the Roland SE-02, which was developed in cooperation with Studio Electronics and also draws inspiration from the Minimoog.

In terms of Software, there are also many great emulations available, with the Moog Model D iOS app, Arturia Mini V2, Softube Model 72, Native Instruments Monark and GForce Minimonsta being among the most popular.

The second era-defining mono synth of the 1970s, the ARP Odyssey, was used by Kraftwerk on the album “Autobahn”. Like the Minimoog, it helped to create a new generation of compact instruments, which brought synthesizers within reach of a much wider spectrum of musicians. And just like for the Minimoog, you now have several options if you want an Odyssey in your studio.

First and foremost, there’s the official reissue developed by Korg, which was and is available in a variety of sizes and colors. In addition to the slim-keyed version, Korg produced a limited full-size edition, which is now sold out. In addition, the Korg ARP Odyssey is available as a desktop module and even as an iOS app. And needless to say, Behringer has made its own version, too.

Another analog synth of the 70s that has been used by Kraftwerk is the EMS Synthi-A. With its pin matrix, the Synthi is an ultra-compact modular system in a convenient carrying case, which allows you to patch up its components as you wish. As of today, there’s no modern clone of the Synthi-A readily available, but chances are that Behringer will have something along those lines, soon.

Moving on to polyphonic synths, the legendary Prophet-5 was used by Kraftwerk during the “Computer World” tour in 1981. After a long list of other synths named Prophet, which included the Prophet 08, Prophet 12, Prophet-6, Prophet REV2 and Prophet X, its inventor Dave Smith was finally able to bring back the Prophet in its original form last year. The new Prophet-5 and Prophet-10 are both available as desktop and keyboard versions.

When it came to drums, Kraftwerk were incredibly inventive right from the start. The band used a variety of modified rhythm generators for home organs, like the Farfisa Rhythm Unit 10. The band also constructed its own electronic drum set, which was played with metal sticks which closed the electrical circuit. This was used to trigger the sounds of a Maestro Rhythm King – another analog accompaniment machine from the home organ era.

While you cannot buy these one-off instruments anywhere, luckily there’s now a big selection of analog and digital drum machines again. For example, the analog MFB 501 Pro has roots that go way back to the 1970s. But it, too, goes with the times: The latest version even lets you load samples.

There’s also a big selection of drum pads and electronic drums. Even Simmons is back! We know that Kraftwerk used the Simmons SDS-V drum pads at one point. But the new electronic drums sold by Simmons only share a name with those classics.

While the first Kraftwerk records were played by hand, the band began to use sequencers on “Trans Europa Express” after some initial reluctance. Their famous Synthanorma Sequencer was custom-made by Synthesizerstudio Bonn Matten & Wiechers and pioneered quantized control voltages (Intervallomat). Later, Kraftwerk used various sequencers by Doepfer, including Regelwerk, Schaltwerk and the MAQ 16/3.

After a period during which the days of hardware sequencers appeared to be numbered, the selection is now larger than ever, largely due to the unprecedented popularity of modular synths. For example, the Doepfer Dark Time offers a workflow that’s very similar to what an early sequencer looked like.

What comes to your mind first when you hear the name “Kraftwerk”? There’s a good chance that you instantly hear the band’s characteristic robot voices in your head. Over the years, Kraftwerk used a variety of vocoders, including the EMS Vocoder, Roland SVC-350 and Roland VP-330.

Just like analog synthesizers, the vocoder has recently seen a new surge in popularity – partly due to the fact that Korg built one into the inexpensive Microkorg, which in itself has become a modern classic. There are many interesting options now, including the Arturia MicroFreak with the microphone accessory and the Behringer VC340, a clone of the aforementioned VP-330. And if you have the cash, there’s also the spectacular reissue of the Moog Vocoder.

Or you could invest in a special vocal effects unit for mangling your voice. The Roland VT-4 Voice Transformer or the TC Helicon VoiceLive series are popular options. These units give you many other effects in addition to the vocoder. And if you can’t be bothered to record your own, there’s always samples, like the Robot Voices sample library.

Nobody was talking about circuit bending at the time, but Kraftwerk were masters at it. For its entire career, the band has been known for using all sorts of devices that weren’t designed to be musical instruments. One noteworthy example is the voice in “Computerwelt”, which came from a Texas Instruments electronic translator. And “Musikant mit Taschenrechner in der Hand” isn’t just a rhyme, as the Casio FX-501b calculator was actually used as an instrument.

Kraftwerk’s Kling-Klang-Studio was also home to all sorts of musical “toys” like the “Bee Gees Rhythm Machine” by Mattel and the Dübreq Stylophone. The unique stylus synth went on to become a cultural icon and is now available again.

Kraftwerk’s long cooperation with Dieter Doepfer, which resulted in the MAQ 16/3, among other things, also gave life to MOGLI, another spectacular creation. The unique controller glove, which was based on the Nintendo Powerglove gesture controller from 1989, was years ahead of current products like the Neova MIDI ring or Genki Instruments Wave. Controlling MIDI devices with gestures? What some start-ups are still pitching as a revolutionary idea was already being done by Kraftwerk decades ago.

Have you been recreating Kraftwerk’s sounds in your projects? How have Kraftwerk inspired you in your music? Let us know in the comments below! 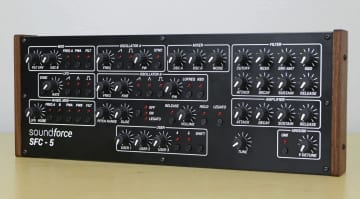 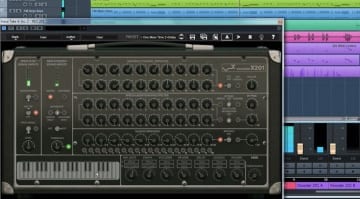 2 responses to “Kraftwerk – their legendary synths, sequencers and sounds”