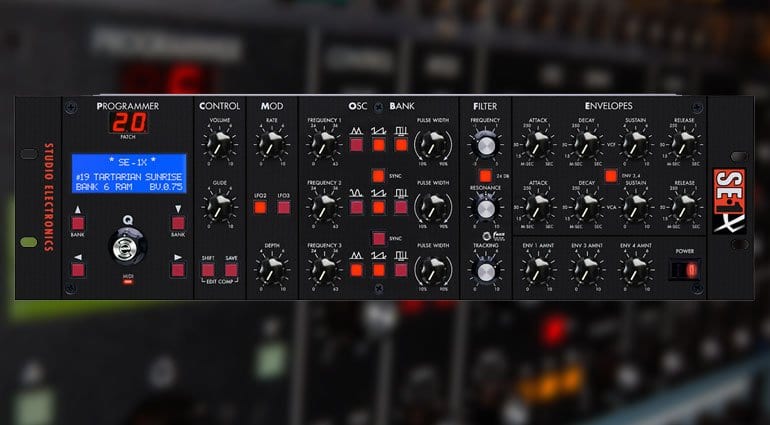 The original SE-1 was released back in the 1990s when almost no one else was making analogue synthesizers. You could almost call it the original Minimoog clone way before anyone else thought that might be a cool idea. The SE-1X was an updated limited edition version released in 2014 and now they are having another run with the “SE-1X 2019”.

It’s interesting when you think about it. Everything went digital in the 90s. Analogue technology was seen as cumbersome, old, tired, expensive and limiting. 20 years later it’s a completely different landscape. In 1994 the SE-1 cost £1295, today the SE-1X 2019 costs about the same which in real terms (inflation and all that) makes it much better value.

The SE-1X is classic analogue monosynth designed around the Minimoog and has become a bit of its own legend. But the SE-1X goes further than the Minimoog and the original SE-1. It adds a second filter to the existing ladder with the 12dB SEM with low and bandpass modes. The classic arrangement of three VCOs now boasts a “silky ARP-ish” sine wave on oscillator 2. There’s a switchable fuzz circuit for amplifier saturation and overdrive. It has 4 envelopes and 3 LFOS with key trigger, phase and MIDI sync. The original SE-1X was criticised for its envelopes not being very snappy – this version sorts that out.

One major feature that has been carried through all versions is the patch library. The SE-1X 2019 comes with 4 banks of sounds in ROM and 3 designer banks in RAM giving a total of 693 patches. There’s also a standalone software editor that, for some reason, you have to purchase separately.

Studio Electronics use the word “patriarch” to describe the historical impact of the heart of the SE-1X over their entire range of synthesizers, even down to the SE-02 collaboration with Roland. This is the synthesizer that built Studio Electronic’s reputation as a builder of quality analogue gear.

Sound examples from the earlier SE-1X