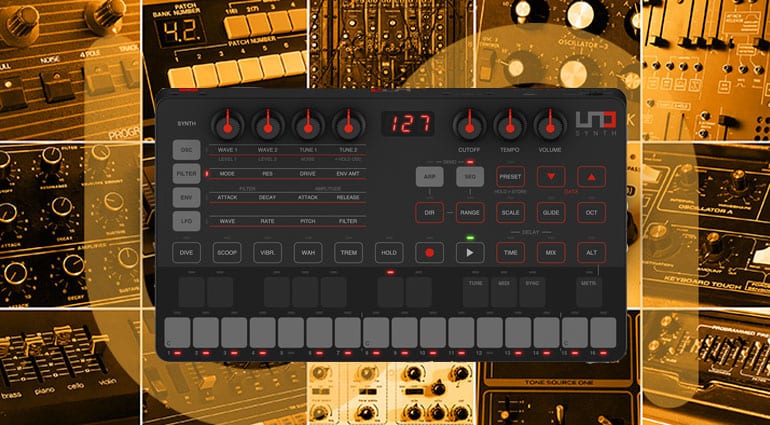 Creative Tech Nerds Tomm Buzzetta recently interviewed Erik Norlander, prog-rock keyboardist and person behind the IK Multimedia Syntronik virtual synthesizer suite and the UNO hardware synth. Erik mentioned that the UNO idea came along during the development of Syntronik where they thought it might be really cool to make a hardware synth rather than a plug-in. After the interview, Tomm was somewhat inspired by this idea and put together all the reasons why IK Multimedia should release a Syntronik Hardware Synth. He wants to gather support and persuade IK that it’s the best idea ever.

Of course, it’s not real. Neither Erik or IK Multimedia have said anything about another hardware synth being in development. Although Erik says that the UNO was made because of the success and popularity of Syntronik, it’s not that far a stretch to believe that if the UNO is a success then there could be more hardware synthesizers to come. It’s true that Syntronik is an astonishing collection of classic synthesizers combined with some IK flavour. And consider what Roland have done with their software-based System-1 and System-8 synthesizers and the Boutique range.

It looks like Tomm has had this idea bubbling away for some time and sees Syntronik and IK as the ideal combination to realise his own dream of a “Grab & Go Workstation Keyboard”. The idea is rather than having a huge, heavy and expensive workstation keyboard, why not have a compact, light and portable one that’s packed full of amazing sounds, effects and even audio recording. It would be 3-octaves, mini-keyed, a bunch of knobs and a display and would roughly the size of a Yamaha Reface. He likes the matrix approach of the UNO rather than a knob for everything in order to keep the price down. He’s looking for a $599-$649 price point and thinks it would sell like hot-cakes. Tomm goes into a lot of detail around the idea, citing previous examples like the Arturia Origin and Creamware Scope platforms and where they went right and wrong. He’s a man obsessed.

IK has officially dipped their toe in the waters of hardware synthesizers and it’s feeling pretty good at the moment. They have the sounds and the technology to do something innovative in a lively and engaged hardware market. Erik said that since the Superbooth reveal of UNO “We have of course had follow-up conversations, but that’s all “top secret” for now.” I think the UNO has every potential to grow into a DUO or a QUATTRO. A fully realised Syntronik Hardware Synth would be quite a thing. I’m not sure about Tomm’s Grab & Go concept, while I agree that it shouldn’t have to be huge and heavy, it also needs to feel serious. I would suggest something like the Native Instruments Kontrol S49 MKII would have the perfect form factor and functionality – but with all the sounds built in.

Anyway, if you think any of this is a good idea then drop an email to Tomm and he’ll make sure IK become aware of the level of interest in such a device. Contact details are at the bottom of his article.

One response to “Is IK Multimedia going to build a Syntronik-based hardware synth?”