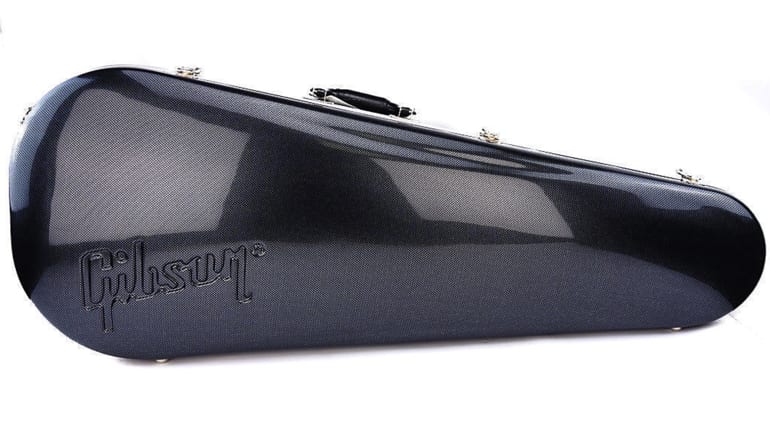 Remember that big old Gibson leak I reported on last month, the one where a guitar maker publishes details about its guitars on its own website for all to see and then suddenly withdraws all the information? Well, those new models were presented at the Summer NAMM show and presented on videos made by media reporting from the Gibson booth. The biggest news, though, could be a new sleek new version of the old Gibson ‘Chainsaw’ protector case…

A few weeks ago we were one of the first music sites on the web to share the images and details of the 2019 line-up. Now, the crew from The Effects Loop YouTube channel popped over to the Gibson stand at Summer NAMM over the weekend and got them all on video. They also had a little chat with the guys on the booth.

So nothing unexpected here. This line-up looks almost the same as last year’s releases, with hardly any major variations to the models.

If anything, the biggest news of the launch is their new Gibson High Performance hard case. The Trogly’s Guitar Show YouTube channel even made a whole 6-minute video about the new case, likening it to the classic and still sought-after Gibson Chainsaw case of the late ’70s and early ’80s.

One Reverb seller, The STRATosphere. even has them for sale already.  I’m weirdly excited about this new hard case, as the old Gibson ‘Chainsaw’ Protector cases were very good and this new one looks like it could be a modern-day version of that great design. The original Protector cases change hands on auctions sites for a lot of money, as they are so well built. Their only downfall is that the plastic latches tend to break eventually, so finding a fully working one can be quite expensive.

The 2019 range is still not officially listed on the Gibson website, but if you check out the video below you will see the models mentioned above being named as new for 2019. I think it is great to see Gibson working hard to rebuild their reputation, I just think they could do with organising their own web page and getting a cleaner, clearer list of what they have on offer.

One response to “Gibson 2019 range at SNAMM with no surprises (except a new HP protector case!)”

Yeah, the original Protector cases were (except for the latches) really good and I had a pretty flourishing side business at the store retrofitting them with metal latches as the plastic latches broke like crazy. Considering the damage rates over here in the States with UPS/FedEx/etc. this is a really good idea.