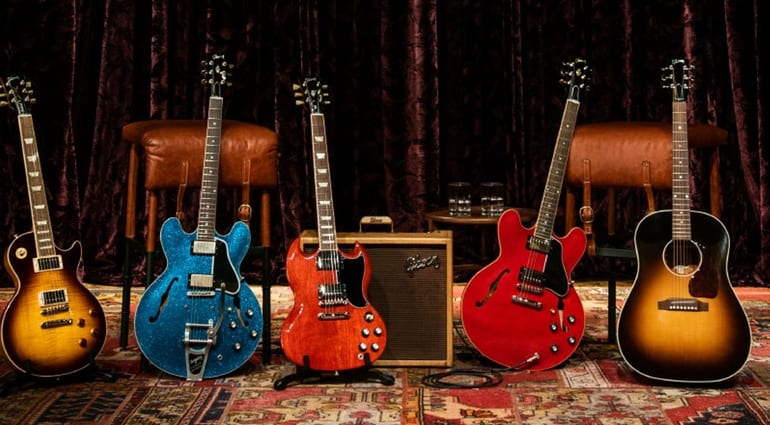 The Gibson 2019 line-up has now been officially announced. Not that it was much of a secret: we already saw the entire range on Gibson’s own website, where they were accidentally leaked back in May!

Overall, there is nothing surprising or new here. And to be fair, that seems to be the point here. The company has had a rough ride financially the last few years and it makes sense to go for a more streamlined and simplified line-up for 2019.

For me, the most exciting thing to write about was probably the new Gibson hard case that I wrote about back in July. Most of us Gibson fans love the old ‘Chainsaw’ case from the ’70s and ’80s and this new 2019 case is closer to that model than other recent designs.

Gibson 2019 lineup leaked back in May

I have no real complaints about any of the new Gibson 2019 models. There aren’t any Star Trek logo-shaped Vs or new variations that have robot overlord tuners. So thumbs up for these 2019 editions.

It is pretty clear that Gibson has overextended their guitar ranges (and their finances) in the past and so this somewhat more sedate line-up makes perfect sense.

Solid bodies have the following models:

Because we saw all of these guitars in May, you aren’t going to see many YouTube videos of reviewers getting enraged about a crazy spaceship-shaped neon ’80s coloured Les Paul this time.

Having said that, a few people aren’t too enamoured by the HP4 circuit. It has 4 push-pull pots and 5 dip switches. It is the switching system for the Les Paul and a few YouTube reviewers are getting their knickers in a twist over it. However, I don’t think it is a massive issue myself. If you don’t like it, then don’t use it. Simple.

The prices are similar to last year, with perhaps a $50 bump on a few models. But considering that Gibson has never been exactly cheap this would be what I’d expect. I feel that if Gibson can get the quality back, then we will play them. Allegations of shoddy workmanship over the last few years has to be addressed, though. I think this new streamlined 2019 line-up could be the starting point for a Gibson revival.