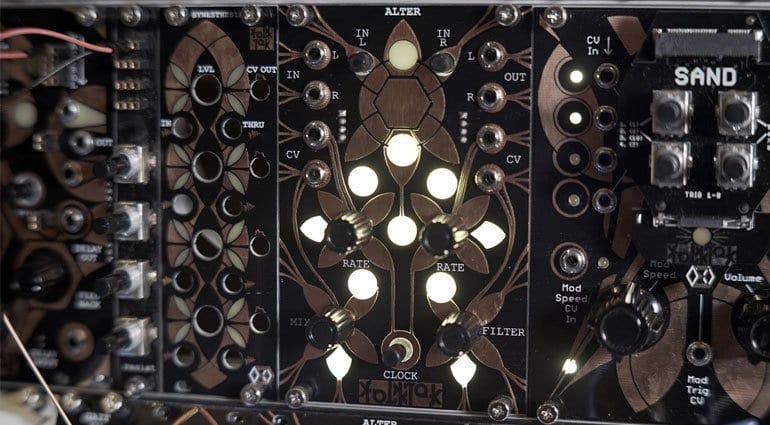 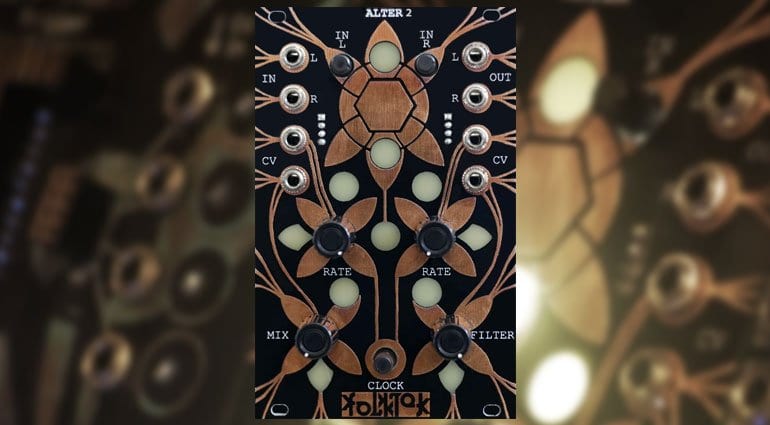 Folktek have a vibe unlike anything else in the Eurorack universe. Their mission is about realising art in synthesizer form. Of using electronics and sound processing to mess with both beauty and noise, design and sound. The release of a new module feels like a discovery rather than a product announcement. And in that sense, Alter 1 and Alter 2 have emerged slightly under the radar. I feel like I’m collaborating in the rising awareness rather than reporting on a new product.

At the risk of peeling back the veneer of mytisque, I can tell you that Alter is a digital effects processor based on the FE1 chip. Although visually identical Alter 1 and 2 have entirely different effects, but they all swim in the realms of delay, glitch and reverb. Designed and programmed by Arius Blaze each module has 7 DSP effects selectable via the hexagonal touch pad.

Input is available in stereo and mono, emerging as stereo at the output. The peak level of incoming signals are indicated by the top LED. The parameter controls on the pre-release images are labelled Rate 1 and Rate 2 – these will be labelled X and Y on the final design. At the bottom is a mix control and a filter which changes depending on the effect. Finally, there’s a master clock control that can drastically change the effect and drop the bit rate – it’s not for synchronisation. All the controls have signal and CV level indications which makes the beautifully forged front panel pulse and throb with light.

They look amazing and sound totally ethereal. Listening to the demo videos is enough to send you off to another dimension. I’m a little disappointed that there are two separate modules. Couldn’t they fit all the effects in a single unit? Choosing one is difficult meaning that you’d probably buy both. But I think one Alter module would look awesome in my rack, but two might be slightly overwhelming and an extravagant use of valuable HP. Maybe it would be possible to swap firmwares at a later date?

Folktek also say that the Alter will be available in pedal format and three Alters will be built into the new “Garden”. Although they don’t say what that is. Some kind of utopian synthesizer after-life perhaps?

Alter 1 and Alter 2 are available for pre-order now for an introductory price of $239. The waiting period is 8-10 weeks so you could probably expect to receive one by the end of the summer. More information on the Folktek website here and here. Demo videos of both modules are below.