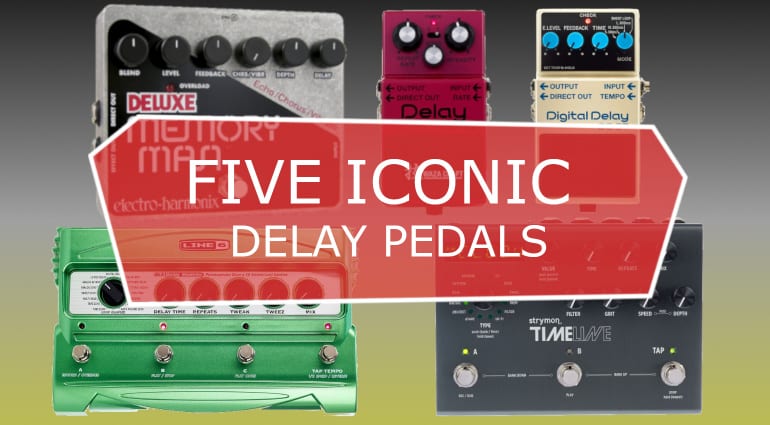 There’re so many great delay units in the market now that one can easily get lost in the myriad of options. So we here at Gearnews decided to compile a list of five delay pedals that we think have proven themselves, and would be a welcome addition to any rig. Without further ado, let’s dive into the 5 delay pedals you really can’t go wrong with.

When choosing a delay pedal, the first thing to consider is whether you want an analogue or digital effect. Neither is better or worse than the other, each provides its own function and has its own application. Analogue delays tend to sound a bit darker, and often have shorter maximum delay times. Digital delays, on the other hand, are less unpredictable, are clear and transparent, will be able to offer longer delay times, and are generally more flexible.

Delays will usually come with three standard controls: feedback (the number of repeats), delay time (the frequency of the delay), and the level (or volume) of the repeated signal. Some pedals, however, will expand upon these three basic functions to provide more variations and control over the way the delay performs

The EHX Deluxe Memory Man is a recreation of the original delay used by the likes of U2’s The Edge, Pink Floyd’s David Gilmour, Radiohead’s Ed O’ Brien and Smashing Pumpkin’s Billy Corgan. If any of those guitarists’s music has influenced you, then you’ll probably be happy with this delay. You get the standard controls for delay, but also Chorus/Vibrato, to further colour your sound. The pedal is true bypass and has a maximum delay time of 550 ms, which is impressive for an analogue delay. 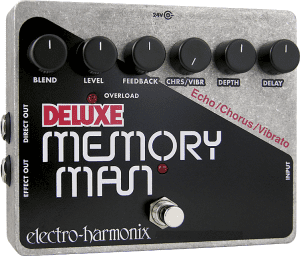 This is another recreation of a popular delay pedal from the ‘80s, the BOSS DM-2. BOSS has revisited the classic pedal and updated it with its Waza Craft technology. That means that it still produces those juicy dripping delays of its older sibling, but is updated for added functionality and flexibility. The DM-2W* comes with two modes, Standard and Custom. In the Standard mode, it functions as the original DM-2 from the early ‘80s with a delay time of 20 – 300 ms. But flip it into Custom mode, and you get up to 800 ms of delay time! 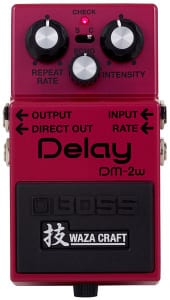 The DD-3 is another stellar delay pedal from BOSS, and a favourite of guitarists since its release in 1986. Just ask Slash. The DD-3T* is an updated version of this digital delay, and as such, offers more flexibility than its previous iteration. You get three delay modes: 50, 200, and 800 ms, and a Hold function which allows you to loop a sound or idea for up to 800 ms. The DD-3T also adds a very useful Tap Tempo function, so that you can adjust your delay time on the fly, without having to fiddle with the knobs. Like most BOSS pedals, it has the company’s buffered bypass. 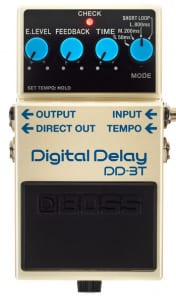 The Line 6 DL4* can be considered a modern classic. It was originally released in 2000 and has been in production ever since. It’s one of the earlier modelling effects units, and offers a huge variety of options. You get 16 delays, some modelled after legendary units, 3 user presets, tap tempo, and a 14-second loop sampler. The DL4 is true bypass, but can be switched to an Alternate Bypass, which allows the delays to trail off rather than just cutting out when you turn the effect off. You can also split your signal into stereo. 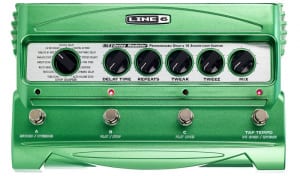 Strymon’s Timeline* has 12 different delay types on offer, with stereo in/out, 200 user presets and a 30 second looper. You get the standard delay control knobs in the top row, while the lower controls let you dial in the sound of your repeats by adjusting the Filter (curve EQ), Grit (distortion), or Speed and Depth knobs for modulation. You also get a Tap Tempo function, a +/- 3dB boost or cut, control over whether the repeats trail or stop dead when bypassed, along with a host of other features that would require an article all its own. Fortunately, there is plenty of info available on it on the interwebs, as it is that good. If you want maximum control and variety from your delay, the Timeline should have you covered. 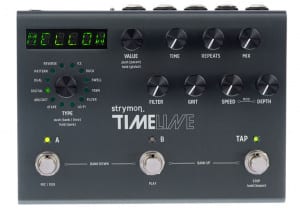 Did we miss out your favourite delay pedal? Let us know in the comments section below!

* This post contains affiliate links and/or widgets. When you buy via our affiliate partner, we get a small commisssion – but you pay the same low price. Thanks for your support!

One response to “Five iconic delay pedals you can’t go wrong with.”