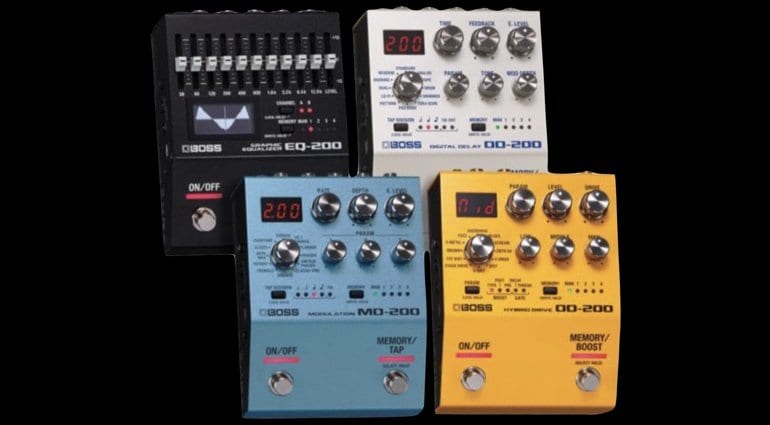 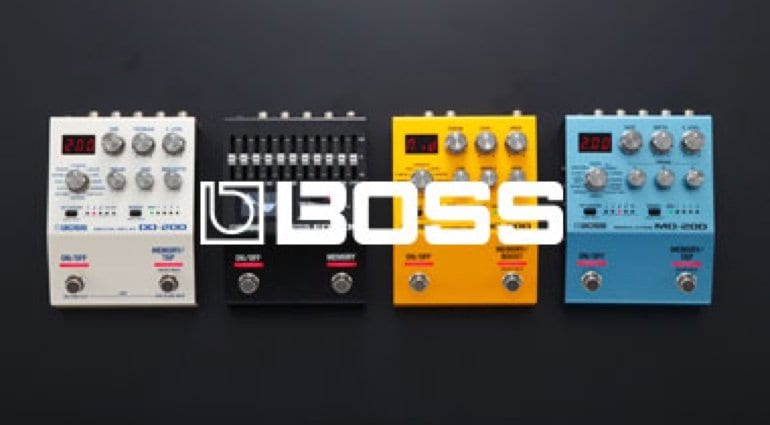 Boss has just announced a new pedal range, the 200 Series. The series launches with a new delay, an EQ, a modulation pedal and an overdrive. Boss says these pedals are part of a new “premium audio quality”, all with of 32-bit AD/DA, 32-bit internal processing and 96 kHz sample rate. Coming in the mid-priced market segment, do they have enough to woo potential buyers?

The premise of the new Boss 200 Series pedals is a “premium” pedal format with 32-bit AD/DA processing and with four presets. Each also has a pair of footswitches.

The four initial models are the DD-200 Digital Delay, the EQ-200 Graphic Equalizer, the MD-200 Modulation and the OD-200 Hybrid Drive.

The new DD-200 Digital Delay has 12 modes that cover digital- and analogue-style delays. This looks like its culled from the Boss DD-500 product line.

Moving on to the EQ pedal, the EQ-200 Graphic Equalizer has two 10-band EQ channels with a built in graphic display which shows the current EQ curve you have dialled in.

The MD-200 Modulation pedal has 12 modulation effect modes, taken from the Boss MD-500.

Each pedal has a second footswitch that can be assigned to either memory or tap/boost functions, depending on the pedal. Plus, you can use external switches, an expression pedal or MIDI in/out via mini-TRS jacks. Boss is also going to release a new BMIDI-5-35 cable to accommodate this last feature, but no pricing is available on that yet.

It is an interesting new direction for Boss. This company obviously has a lot of high quality effects algorithms in its back catalogue to pull from. If the sound quality and usability are there then at these prices rhe new 200 Series could be a steal.