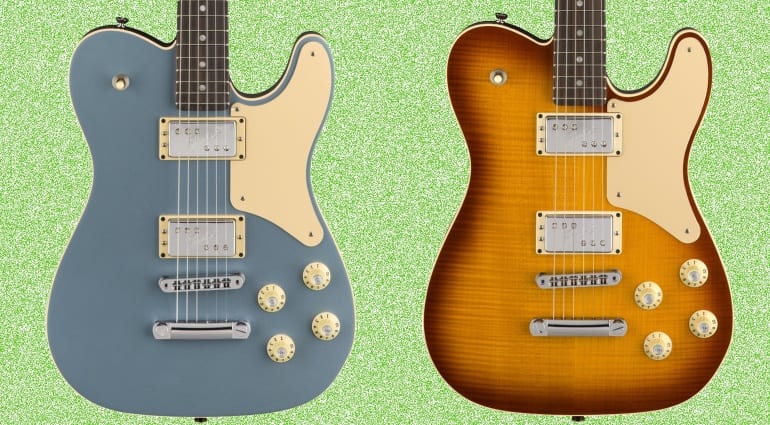 The Fender Parallel Universe Series has certainly put the cat amongst the pigeons with Fender fans and purists. But it looks like its Troublemaker Telecaster is aiming to take a slice of Gibson’s pie too!

Launched at this year’s Winter NAMM (and unofficially before that leaked by certain Fender dealers) the Troublemaker Telecaster sounds on paper very familiar indeed: Twin ‘Shawbucker‘ humbuckers, a mahogany body with a book-matched plain maple top and finished in nitrocellulose. It also has a Fender Adjusto-Matic bridge with stop tailpiece and a four knob Volume/Tone control layout with a toggle switch on the top horn.

The neck profile is the American Professional Tele neck, so somewhere between a D and a C profile. It comes with a large Strat-like headstock and a modern 9.5”-radius rosewood fingerboard.

You can order it in either Ice Tea Burst or the  Ice Tea Metallic nitro finish.

Fender has just released another promo video with Telecaster aficionado John 5 playing one blindfolded and he gets a little over excited when it is revealed to him what he is actually playing.

The retro styling blends nicely with the very Gibson-esque layout and look. I have to admit I’m not a huge fan of the series as a whole, but this one does look a hell of a lot nicer than the Fender Parallel Universe Jazz/Tele I wrote about recently! This one might grow on me. And I’m the sort of man that can never have enough Telecasters in my life, so I may even buy one myself someday. They are a limited run, so won’t be around forever.