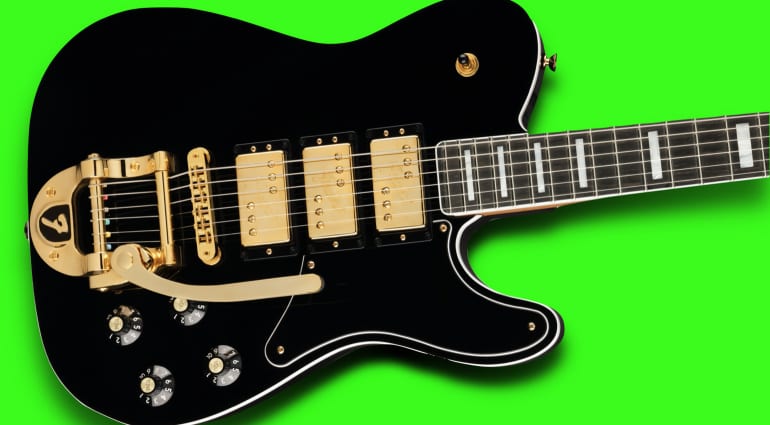 The Fender Troublemaker Tele Deluxe Bigsby from the company’s Parallel Universe Vol II series has finally landed, and it is a seriously tasty looking Telecaster. Finished in black and gold, and loaded with three humbuckers, this new guitar looks like it means business.

The guitar has a mahogany body with three Fender Double Tap humbuckers, which I can only imagine will give you a shedload of fantastic tones. Yes, you can split them by using the push/push pots, and the special wiring allows for up to 8 pickup combinations! That makes it a pretty versatile instrument, and using the three-way switch, the twin volume and tone controls (plus those coil taps), you should have no trouble finding a tone that suits your needs. The pickups have been calibrated to be well-balanced across all available tones.

The bound bolt-on mahogany neck has the standard Fender 25.5″ scale length, and an ebony fingerboard with a 12” radius, 22 medium jumbo frets, and pearloid inlays. The addition of the Bigsby tremolo and Adjusto-Matic bridge make for an interesting style, while also giving you the ability to wobble chords and have a bit of fun.

The guitar comes with a special Parallel Universe Vol II neck plate to commemorate its release and the fact that it is a limited edition for 2020. You also get a Certificate of Authenticity, and the inclusion of a custom colour hardshell case is always welcome. It sounds great in the official demo video and, in my opinion, is probably the nicest of the new Parallel Universe Vol II models that I have seen. 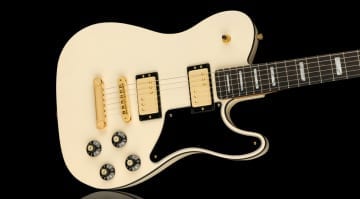