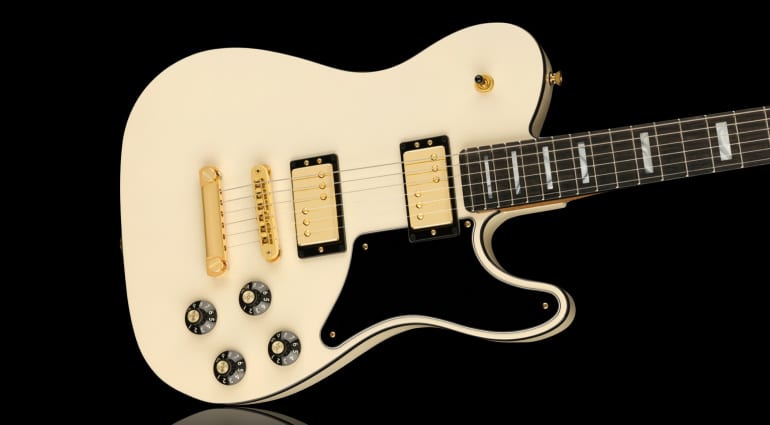 Fender has started shipping a new model from its Parallel Universe Vol II limited edition range, the new Troublemaker Telecaster Deluxe. This hybrid guitar is based on the classic Telecaster Custom design, with a few neat little twists to make it, well, a little different. And yes, it does look an awfully lot like a Les Paul Custom!

Fender’s Parallel Universe Vol II  limited edition range was announced earlier in 2020. This range of oddball guitar designs is based on classic Fender models from years gone by, all reinterpreted in various ways. And this latest release, the new Troublemaker Telecaster Deluxe, is a really nice-looking design.

The body has an Olympic White lacquer finish and a nice binding, with gold hardware all round. Not only is it fitted with Double Tap humbucking pickups, but it also has a solid mahogany body, a mahogany neck with a 12”-radius ebony fingerboard and pearloid block inlays… If ever you wondered what Fender’s take on a Les Paul Custom would look like, here’s your answer.

This Parallel Universe guitar has taken parts of the Les Paul’s DNA and melded them into this design. And I think it has been done really well! I would certainly play one, as my main gigging guitars are a Les Paul Custom and a Telecaster, so this ‘hybrid’ has a lot of appeal to me.

Some aspects are typically Fender, like the bolt-on neck joint and the 25.5″ scale length. But the rest? A Les Paul Custom in Telecaster form. Great!

The Double Tap humbuckers allow you to access a variety of tones via push/push pots, so you have humbucking and single-coil tones on offer. That makes for a versatile guitar. It isn’t exactly cheap, but it is a limited run and does stand out from the crowd. I think I would buy one if I saw it for sale on a rack full of guitars, given that it will probably cover a lot of bases tonally and looks solid.

Check it out in the official demo video below and see what you think. Does it sound like a Les Paul Custom to you? I think Trogly nails it in his review below, so check that one out as well.