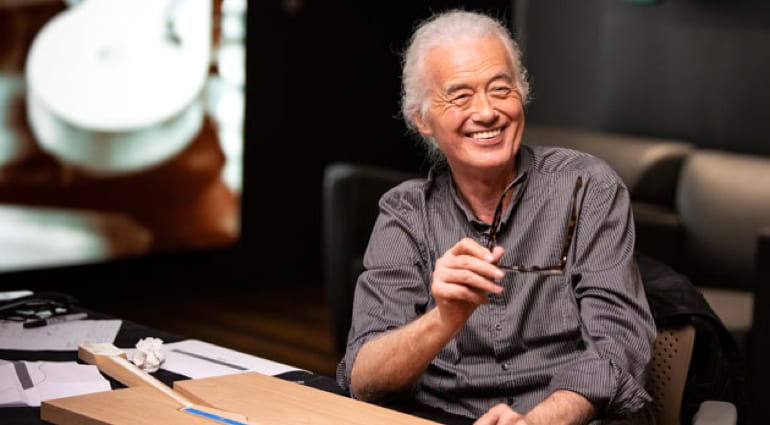 Fender has just released a teaser for a series of Jimmy Page Signature Telecasters. The iconic guitarist from Led Zeppelin wielded one of these on earlier recordings with The Yardbirds and on THAT solo from Stairway To Heaven.

It looks like the Californian guitar company is recreating his famous 1959 Fender Telecaster, the one that he used on many of their famous recordings. It’ll be the 50th anniversary of the guitar being used by Mr Page by the time they are released in January 2019.

Jimmy Page used the guitar with The Yardbirds and also Led Zeppelin, he allegedly was given the guitar by Jeff Beck in 1966 as a gift and used it exclusively on sessions for both bands. The guitar itself went through a few visual modifications including a mirrored pickguard and eventually getting a dragon painted on it, during Jimmy’s Psychedelic phase!

When Led Zeppelin formed in October 1968 the guitar got the dragon makeover and can often be seen in early video footage of the band, sometimes being attacked with a violin bow!

Looks like we’ll be getting one of each version, so expect a mirror pickguard and a dragon version as well. This will be a huge deal for many Led Zeppelin fans, as we have all been waiting many, many years for this official Fender release to come to fruition.

Two models will be made on Fender’s production lines, and two will be produced in the Fender Custom Shop. This means we are getting potentially four versions of the guitar and so we may well see an aged version.

“This guitar is so special and has so much history, so I approached Fender to see if they’d be interested in recreating it,” Page said. “They really got it 110 percent right, or 150 percent right. It’s so absolutely as it is, as it should be, and as it was.”

“Visiting the Fender Custom Shop to sign and paint the guitars with Paul Waller was a real thrill,” he added. “To see all those absolute gems on the wall, it’s a pretty amazing experience.”

This news is really pretty exciting as many players associate Jimmy Page’s tone with a Les Paul, whereas in fact he often used a Telecaster on many of his most famous recordings. As mentioned earlier it was used for that famous Stairway solo and also covered a lot of ground on the first two Led Zeppelin albums.

There is no more information just yet, but you need to watch the teaser video below to hear Jimmy Page talking about this collaboration.