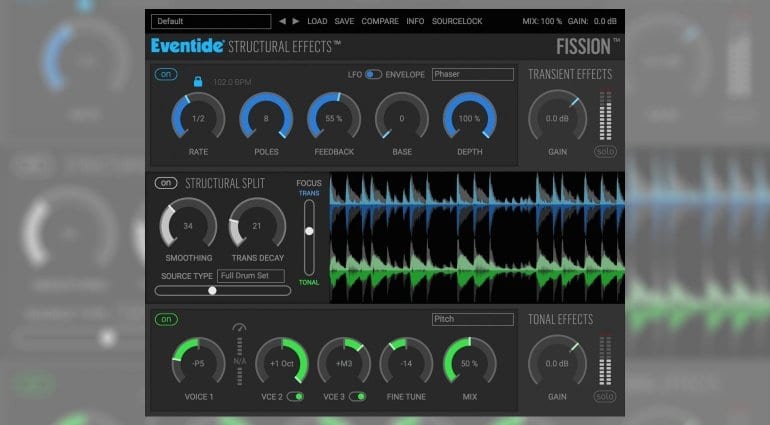 Eventide released two teaser video’s about the ‘secretive’ work going on in their labs over the new year (see our previous stories in December and January for a refresher). It turns out we guessed the name of the new plug-in correctly. ‘Fission’ is here and we can now understand what they mean by their new term ‘structural effects’. Fission isn’t just a new plug-in, but potentially a window on the future of Eventide’s effect processing. There maybe more plug-ins to follow, but more imminently should be guitar effects and the all new H9000 effects unit, which is coming later this year.

So what does ‘structural effects’ mean? Eventide vaunt their new detection algorithms that let you spilt a source sound into its elements, process the elements differently before summing them back together. In the case of Fission, it splits the sound into its transient and tonal elements. Although there’s probably a lot of fun to be had with this plug-in, these detection algorithms are quite advanced with plenty of fine-tuning provided to the user.

Transient-based processing has become increasingly popular in modern mixing. When transients are mentioned, we often think of transient designers, particularly for drum processing. Recently we’ve seen transient processing presented with a fresh approaches from Sonnox and Boz Digital Labs. However, this isn’t a transient designer but a way of adding many effects to the transient and tonal elements – separately. Once I had appreciated the combination of effects that are possible here, I began to realise the Eventide plan to offer with Fission.

Check out the video below to see the plug-in in action. Here are the list of effects that can be applied separately to the transient and tonal elements of a sound:

I think this looks like a great plug-in from Eventide, demonstrating that one of the industries’ ultimate effects manufacturers is being creative and modern. This is an exciting time for Eventide and I can’t wait to hear more about the H9000.

Fission is available now for around 85 GBP. Check out their webpage for more information.

Here is Eventide’s introduction and instructional walk-through video of the new structural effect plug-in ‘Fission’. This is from the Eventide Audio YouTube channel.