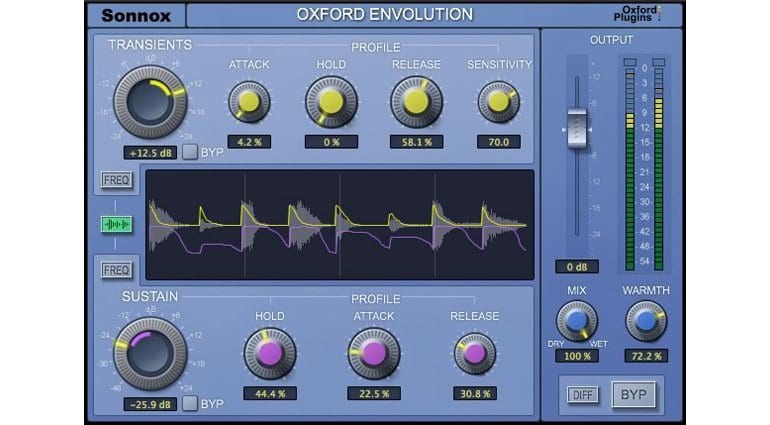 I love Sonnox plugins. They’re serious mixing tools. They’re not a manufacturer who release a new plugin very often, or just for the sake of marketing. When they do, it’s bound to be something worth taking a good look at. I’ve now had the chance to do just that, and realised that this plugin takes transient designing to the next level.

I use transient designers all the time, sometimes for effect but often as a stage of dynamics processing. I have my favourites and of course some suit different applications better than offers, but it’s surprising how different they each behave. Envolution takes transient and sustain shaping to the next level, offering detailed user control to give a huge variety of sounds. However, even if you haven’t used transient designers before, then Envolution can still deliver a great sound and it’s easy to use.

As you’d expect, the plugin is divided into three sections; transients, sustain and an output stage. For both the transient and sustain sections there’s the obvious gain setting which both work in a positive and negative directions. Couple this with extensive attack, release, hold and sensitivity parameters, these alone make Envolution extremely versatile. My only complaint would be to see these measured in ms rather than %, but this doesn’t effect the clear sonic differences.

However, this is just the beginning of Envolution. It’s new party piece, which I haven’t seen in any other equipment before, is it’s frequency targeting. On both the transient and sustain sections it is possible with either an EQ focus or tilt, to target the respective processing. This is very clever, and allows crisper drum hits or smoother low-mid enhancements and everywhere in between. In fact, you can be quite subtle with Envolution, as if you were using a dynamic EQ, or use it very creatively in, say, EDM music. The plugin will easily stretch as far as becoming a ‘gate’ for live drums, as I found it’s is easier to shape the reduction curve in Envolution than in a standard gate.

The output stage offers a master level to gain match for A/B comparisons and to avoid clipping. Underneath this is a great ‘Mix’ control for blending in some of the original signal which always works better than duplicating the channel or bus. Next to this is a ‘Warmth’ control that adds some very subtle drive that sounds great. Besides the standard bypass control, the transient and sustain sections can each be bypassed individually, which I like a lot. A very neat feature is the ‘DIFF’ button, that makes only the dynamic differences produced by the plugin audible. This is very useful when dialling in your settings or to create an interesting effect.

So, is it worth 170 GBP for the native version, or 275 GBP for the Pro Tools HD-HDX + Native version? Yes it is, this is a very high-quality plugin with a lot to offer that you can’t find anywhere else. However, I can’t help but feel Sonnox are well out of line with other manufacturers in terms of modern pricing structures. Personally, I’m going to wait until it comes down in price, or for the next Black Friday. I also can’t find a mention of it being included with any of the bundles Sonnox offer – surely this is coming soon?