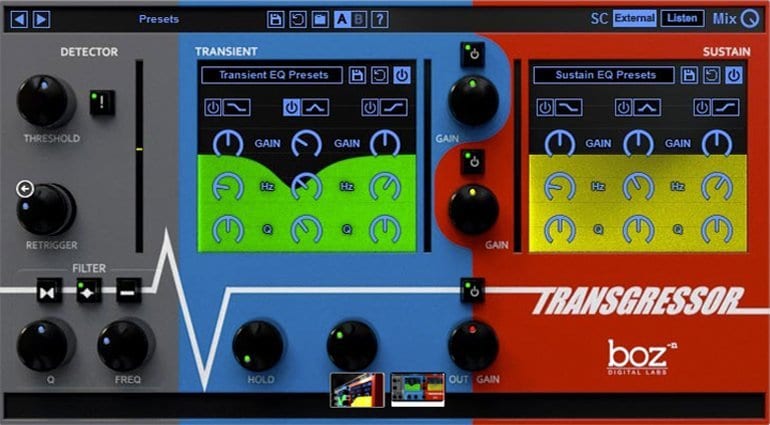 I recently stumbled across this new plug-in, and although it was announced at NAMM, I feel it needs a mention. Although it has a name you need to say out loud very carefully, there is some fresh thinking here. Transgressor isn’t a transient processor as they are traditionally known.

Transient processing with the Transgressor plug-in

Transient processing has become a major trend in modern mixing. However, the traditional transient ‘designer’, also known as a ‘shaper’, effects the dynamics of a transient, its sustain, or both. The most interesting transient processor we saw released last year was, for me, Sonnox’s Envolution, which combined this type of processing with frequency targeting via a side chain.

Transgressor is slightly different, in that it doesn’t directly effect the dynamics of the transient and sustain of a hit, but allows you to EQ each part separately. The video below demonstrates this well and gives plenty of audio examples. What I appreciate the most about this new tool is the algorithms that Boz Digital have come up with. For example, the linearity of the separate EQ’s must be carefully matched, otherwise drum hits could start to sound very odd. I’m also impressed with the detection of drum hits via the threshold settings.

The down side to this interesting new tool is it appears only suitable for drum and percussion processing. However, at this price, who cares. It looks like a lot of fun and should work well combined with other processing tools. I hope this is only the beginning for this plug-in. It would be awesome if built into the same GUI you could also apply dynamics, saturation and traditional transient processing as well as EQ. Boz – you can put my royalty cheque in the post!

For more information or to download a free trial, head over to the Boz Digital Labs webpage. The Transgressor plug-in is available as a Native plug-in for Windows and Mac, and is currently on offer for a very reasonable 49 USD.

Here’s a video by Boz Digital Labs on their YouTube channel, with Boz himself explaining in quite some depth about this new plug-in. It isn’t the most enticing video footage you will ever watch and is perhaps a little overkill for a product demo. However, Boz is very interesting to listen to, clearly knows his stuff and it shows how much he cares about their product which is refreshing.