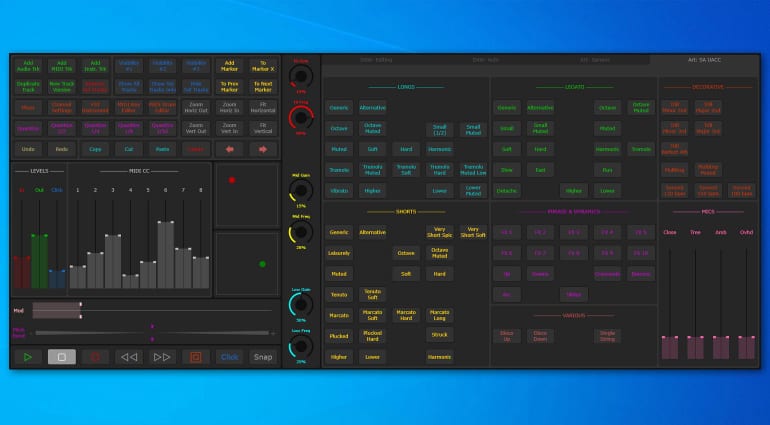 Symphony is a comprehensive and fully customisable touch-screen MIDI Controller that can run and process MIDI through any software or hardware MIDI device.

Aida Sound was until very recently called Devil Technologies who are the people behind the DTouch touch-screen DAW controller software for Cubase and Pro Tools. Symphony loses the specificity of the DAW control and massively expands the MIDI control and processing. The idea is that you can build your own graphical controller for any virtual or hardware synth, or anything that can take a MIDI input.

You can drag together slider and knob combinations, add buttons, labels, panels, XY pads and scripts full of MIDI processing magic. You have multiple pages and tabs of panels to have custom setups for whatever bit of gear you’re controlling or have multiple instances open making use of the multiple virtual MIDI ports to keep everything going where it should.

To touch or not to touch

The DTouch software centred specifically around a touch-screen environment. With Symphony they’ve de-emphasised that a little and put forward the idea that you can also use it with a mouse. You don’t have to have a touch screen to benefit from building your own interface to your synths. However, if you have a touch screen then Symphony will eat up as many fingers as you push at it.

One application that springs to mind is dealing with layered instruments. If you’ve layered up virtual instruments in your DAW you would have to switch between GUIs in order to access the various controls. With Symphony you could build in only the controls you are likely to use and have a single interface controlling a stack of synths with a single mouse.

Underneath the graphical interface is a deep programming layer where you can wire up all sorts of interesting and clever processes. It has a node-based logical editor where you can set up flows of data and determine rules to govern them. Whether it’s taken a trigger and activating a whole bucket of CC data or splitting a fader out to multiple destinations with different response curves. 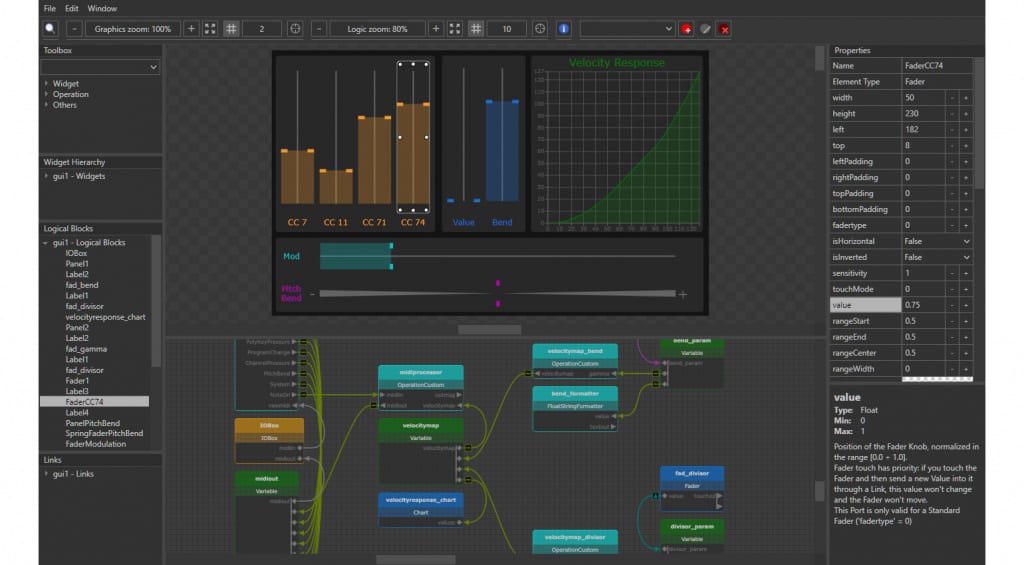 You can create a field of macro buttons that perform all sorts of MIDI tasks and process data in both directions. It’s as complicated as you can imagine it to be.

It doesn’t have to be complicated. You can load up a template and map it to something in seconds. You can also share your projects and load in other peoples maps of your gear. What I like about touchable controllers is they give you a place to play and explore virtual instruments in something that feels like a performance space. So often with a DAW we craft automation and make decisions that we write into the track. Engaging with a touch controller brings back a playfulness and creates possibilities.

Symphony is available now for Windows 10 only for an introductory price of €60.