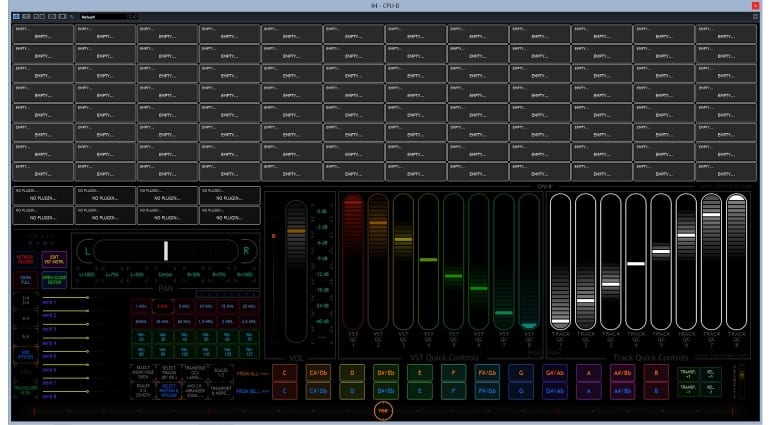 Any Cubase or Nuendo users looking for a cheap DAW controller? Well this VST-based software will turn your touch-screen into a controller for only 99 EUR! It’s early days for this one-man-band invention, but the signs are promising. Developer Karol from 14bitMIDI, created CPU-BUNDLE from a musician and composer’s standpoint.

This isn’t quite the same as Raven or D-Touch where you effectively control the DAW directly, but provides a unique range of GUI’s, enabled with touch-screen usability. This has been the work of developer and inventor Karol, who started working on the idea for colleagues of his. Now released as a publicly available product, 14bitMIDI are claiming they now have a DAW controller for only 99 EUR. Of course, that doesn’t factor in the cost of a touch-screen.

There are 4 GUI’s available as 4 separate VST instruments that can be loaded into the DAW, just like any other VST instrument. I like this concept a lot as it doesn’t require a third party application to be running before you boot the DAW. It also permits the setting to be saved with each project.

There are of course some limitations with this variation of a touch-screen controller. For example the GUI’s aren’t vector based and therefore can’t be re-sized. If you’re considering this solution, then you will need a screen with a resolution of 1920 x 1080 or higher.

I think this looks like a really attractive solution for Cubase and Nuendo users which will hopefully continue to be developed. I expect further GUI’s will become available, or a way to customise your own designs. Building you’re own mixer or post production workflow could be really interesting, but for the time being there 4 currently available with user-defined keys already look very flexible.

For more information, head over to 14bitMIDI.com. For a fully operational demo, or to purchase the VST plug-ins for only 99 EUR, visit 14bitMIDI on Gumroad.com. Don’t forget these require a touch-screen to realise their full potential, but if you already have one then this looks like a really useful tool.

Here is a short introduction video by Karol of 14bitMIDI for CPU-BUNDLE. A full instructional video playlist can be found on YouTube here: 14bitMIDI CPU Playlist